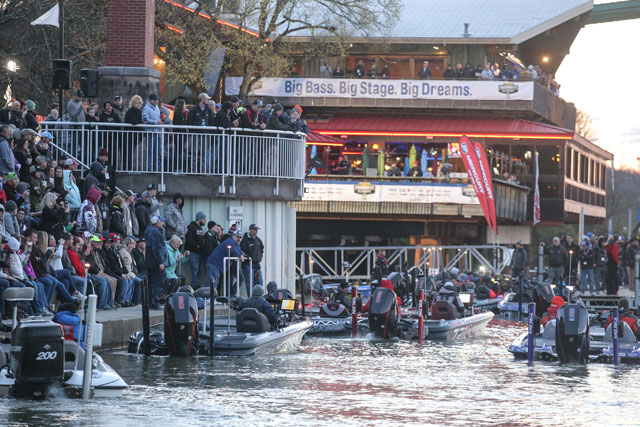 “Long lines of fans waiting to enter Thompson-Boling Arena were similar to crowds at game days when the University of Tennessee Volunteers play some of their biggest rivals there,” said B.A.S.S. Director Chase Anderson, a native of Knoxville. “The Classic Outdoors Expo presented by DICK’S Sporting Goods was packed from the moment Gov. Bill Lee cut the ribbon to open the show, and it continued with capacity crowds through the weekend.”

Anderson noted that attendance was great despite the fact that Tennessee’s basketball team was playing in the SEC Championship Tournament in Nashville all three days of the Classic.

“Hosting the Bassmaster Classic in Knoxville was simply an incredible experience,” said Chad Culver, Senior Director of the Visit Knoxville Sports Commission. “We knew it was going to be huge, but to beat the all-time attendance record really showed how our community embraced this event. We also appreciate the support we received from the City of Knoxville, Knox County and State of Tennessee to bring this event to Knoxville.”

The Expo, which was held March 15-17 in the Knoxville Convention Center and the adjacent World’s Fair Exhibition Hall, drew a record total attendance of 92,819 over the three days it was open, according to turnstile counts. And show-goers were in a buying mood. One retailer reported a 30 percent increase over its best Classic sales mark ever, and sales at the B.A.S.S. merchandise booth were double the average for the past two years.

The Get Hooked On Fishing activity center, with casting lessons, a catfish pond and educational exhibits about fisheries, wildlife and conservation, drew a record 18,500 participants, mostly elementary-age children.

“I was told the Expo was one of the biggest events to take place in the World’s Fair Exhibition Hall since the World’s Fair in Knoxville in 1982,” Anderson said. “And everyone was blown away by the fact that 6,500 fans lined the Tennessee River at Volunteer Landing for takeoff at daybreak Saturday.

“I knew Knoxville and east Tennessee would show up for the biggest event in sportfishing.”

Actually, Classic Week drew fans from throughout the country and even beyond the United States borders.

An interactive map in the Expo showed that visitors came from every U.S. state and several foreign countries. B.A.S.S. customer service officials reported record sales of memberships, with applications received from 35 states. Lifetime membership sales were up 50 percent over the previous year’s sales, including one purchased by Gov. Lee, whose wife, Maria, is an avid angler.

In addition, 258 members of the media applied for credentials to cover the Classic, including journalists from 28 states, as well as Japan, China, Australia, Italy, Germany and Canada.

Fans also tuned in from afar to watch the action on Bassmaster LIVE — which established new records in video plays and minutes watched — and follow the event on Bassmaster.com. Online visits were recorded from 179 countries, including Italy (the home nation of Classic competitor Jacopo Gallelli), Zimbabwe, Namibia and South Africa, four of 10 nations with active B.A.S.S. Nation affiliates.

“After drawing huge crowds in Houston in 2017 and Greenville, S.C., where we set a new attendance record of 143,000 last year, we are proud and ecstatic to see the Classic continue to grow in attendance and prominence in the world of sportfishing,” Anderson said. “We will go all-in to maintain that momentum and exceed those records when we celebrate the 50th Bassmaster Classic a year from now.”