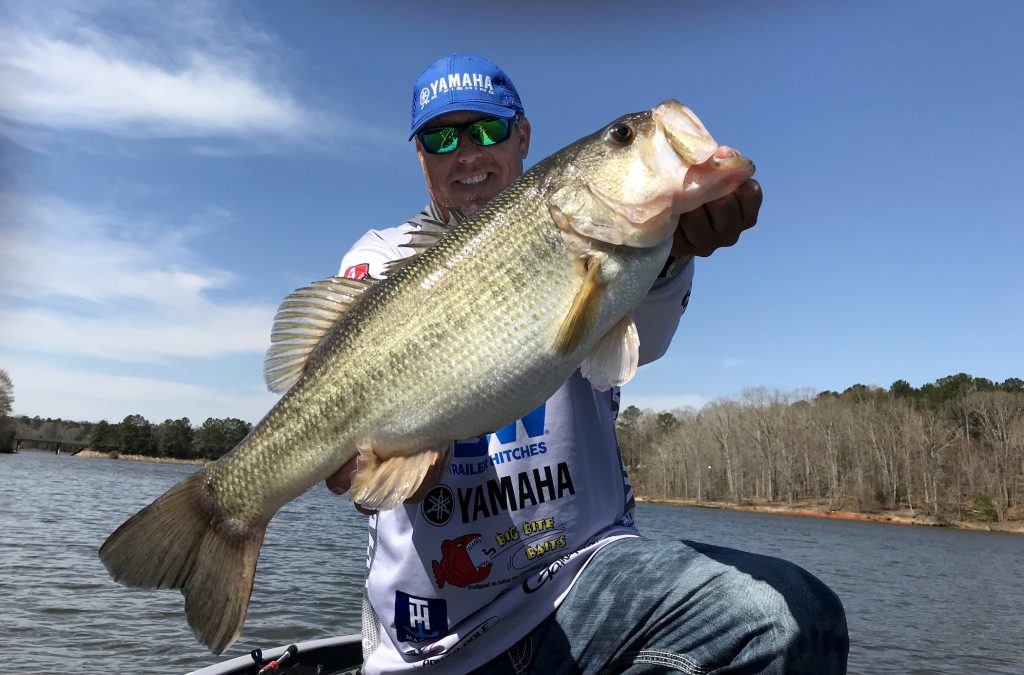 Russ Lane’s 7-10 pushed him into the Top 10 of Elimination Round 2 on Falls Lake today. Weights are zeroed for all 40 anglers who advance to the Knockout Round on the same lake tomorrow
Palaniuk, Lane, Sprague Complete Flip-Flops on Falls, Advance to Knockout Round at
Favorite Fishing Stage Three Raleigh presented by Evinrude
While only one of the three finished in the Top 5 – Palaniuk was fourth, Lane was sixth, Sprague was 10th – the numbers to pay the closest attention to are their SCORETRACKER

catches for the day on Falls Lake: Palaniuk piled up 42 pounds, 5 ounces on 16 fish, Lane weighed in 36-15 and Sprague finished with 33-7.
Strong numbers, to be sure, but especially notable because those three anglers started the morning in the bottom 10 in the standings after their Shotgun Round and executed the kind of dramatic turnarounds that would lead a betting soul to believe that they’ve figured something special out on Falls.
“I learned that I’m way better on Falls Lake than I am on Jordan Lake,” Palaniuk joked. “The amount of cover in Jordan is crazy – Falls really doesn’t have that much cover, so you’ve really got to search hard to find it in certain spots. That’s what I felt like I stumbled onto today, and it worked out well. I just hope it holds up – I’m glad that we’re going back to Falls tomorrow and not going back to Jordan, because I never got to the right area in Jordan. I feel like if it holds out, I feel like I have Falls dialed in way better than I did Jordan.”
Squeaking above the Elimination Line

The competition around the Elimination Line came down to a battle of less than 2 pounds among Jeff Kriet, Dave Lefebre and Marty Robinson. Kriet scraped together 12-10 to finish the day with 33-10, and then hung on to the final spot as Robinson climbed to within 1-7.

“I was 48 years old when I started the day, and now I’m 72,” Kriet joked, referring to the stress of the final hour of competition.
What about Jordon, Walker, etc.?

Saturday’s X-factor is the group of anglers in both Groups A and B whose Shotgun Round weights offered them the luxury of spending most of their Elimination days practicing and becoming more familiar with the nooks and crannies of Falls. David Walker, for example, weighed in only four fish for 9 pounds on the day; Casey Ashley weighed just one fish … but it was a 7-6 hawg.

“There’s no part of this lake I haven’t seen now, so I do have a good feel for it,” Walker admitted. “Some of the guys have been laying off (their fish) for sure, but I still feel like I’m searching for a good answer to it. It can be so maddening to figure that out, and honest to God, one cast can clue you in to what you should be doing. It can be just that simple. But I feel like I’m still going to be scrambling a little bit.”
The last shot at Falls
Weights will be zeroed for Saturday’s Knockout Round at Falls, so it’s a fresh start for all who have advanced.

Many of the anglers fishing the previous two days of Elimination Round competition expressed some anxiety about leaving behind the big-fish bonanza that occurred on Jordan Lake in the Shotgun Rounds. And who could blame them: Kelly Jordon racked up a Bass Pro Tour-record weight of 82-4 during Day 1 of Shotgun Round action on Jordan Lake, and several anglers experienced near-record days on that fishery.

But after a full day on Falls, most of the remaining 40 anglers have now settled into areas and patterns that they’re more comfortable with in the one-day “shootout” format of the Knockout Round.
“I got to Falls and was actually impressed with how warm the water had gotten,” Sprague said. “I really thought these fish would be progressing a little further, similar to what they were doing at Jordan, so after the first period I decided to make a change. I figured I’m either going to go home with the four fish I have on the SCORETRACKER or fish and go catch them. We ran up to an area where I had practiced, I’d only had one bite in practice but it was right, just the fish hadn’t set-up there yet, and today they were there. The warm weather has allowed them to funnel in and hopefully tonight, more of them will funnel in there and we’ll thrash them tomorrow.”
The Day’s Results
To see all results from today’s Elimination Round, who is competing in the Knockout Round and to keep up with cumulative results throughout the week, visit MajorLeagueFishing.com and click “Results.”
How, When & Where to Watch

Knockout Round Competition among the final 40 anglers begins Saturday at 7:30 a.m. ET, with live, official scoring available via SCORETRACKER on MajorLeagueFishing.com and on the MLF app. The MLF NOW! live stream starts at 10 a.m. ET, with live, on-the-water coverage continuing until lines out at 3:30 p.m. The Berkley Postgame Show live stream will start at approximately 5 p.m. daily.

###
About Major League Fishing
Founded in 2011, Major League Fishing (MLF) brings the high-intensity sport of competitive bass fishing into America’s living rooms on Outdoor Channel, Discovery, CBS, CBS Sports Network, World Fishing Network, Sportsman Channel and on-demand on MyOutdoorTV (MOTV). New for 2019, the Bass Pro Tour consists of eight events and a championship streamed live on www.MajorLeagueFishing.com and MOTV. MLF uses the entertaining and conservation-friendly catch, weigh and immediate-release format where every scorable bass counts and the winner is the angler with the highest cumulative weight. For more information on the league and anglers, visit www.majorleaguefishing.com and follow MLF on Twitter, Instagram and Facebook. For more in-depth coverage, see Game & Fish magazine, the official publication of MLF.