Kevin VanDam loves football, archery season for whitetail deer, and thoughts of bass binging on baitfish. And those are just three good reasons the 7-time Toyota Bassmaster Angler of the Year calls autumn his favorite time of year. 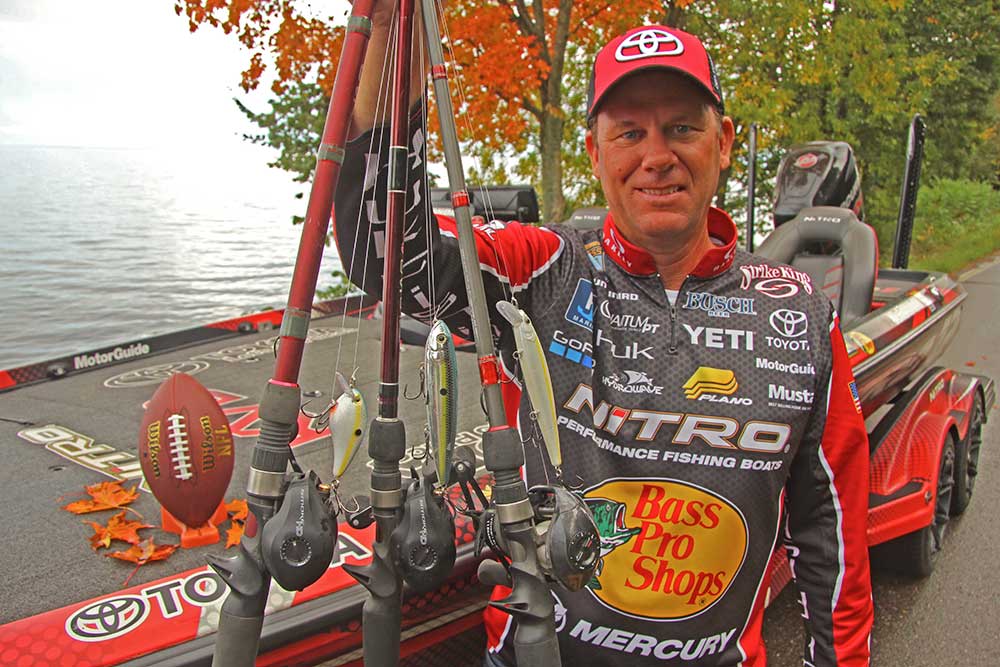 “Oh yea, there’s no doubt life is good this time of year,” says VanDam. And football is a large part of October’s goodness for he and his treasured family.

“Of course I love my home state Detroit Lions, but I maintain a friendship with Willie Young, an avid angler and pass rush specialist for the Chicago Bears, who used to play for Detroit,” he says.

“Plus, my twin sons Jackson and Nicholas are in college at Grand Valley State University. Their football team owns the highest winning percentage in college football history, and we were recently on campus for Family Weekend when the Lakers won 49 to 0,” says the ever-competitive VanDam.

But fall is certainly not only about football for the VanDams. They have long had a healthy appetite for whitetail deer hunting, and October 1st kicks off the start of Michigan’s archery season that they treasure in much the same way bass covet baitfish during the calendar’s fourth quarter.

“Fall is all about the bait, and in a lot of reservoirs that’s going to involve bass keying on shad in major creek arms of the reservoir,” says VanDam. “That pattern is talked about constantly, and it’s true, but not every quality bass follows bait to the back of a creek — there’s still plenty of good fish eating bait on flat, shallow, points along the main lake too.”

No surprise then, all three lures pro bass fishing’s greatest angler chose as his favorites for fall are shad imitators.

His starting line-up includes a squarebill crankbait, a topwater walking bait, and a jerkbait. And just as importantly as what lures he specified … is knowing where and when to use them … and what equipment he matches them to.

Squarebill crankbait – He chooses his namesake KVD 1.5 from Strike King and says, “It’s just such an efficient bait because the bass are moving shallow, and they’ll bite it in just about any color of water,” says VanDam.

“The dream scenario for a squarebill at this time of year is a rocky creek channel swing in the back of a major tributary, with shad active near the surface of the water,” he adds.

While some pros speed up to faster gear ratio reels in autumn, VanDam remains faithful to the same 5.3:1 ratio from Quantum that he cranked up Bassmaster Classic and Angler of the Year titles with during his illustrious career.

“With the larger spool and line capacity on the new Smoke HD reel, I’m still picking up plenty of line to maintain a good speed,” explains VanDam, who pairs it with a forgiving 7’ 0” TourKVD cranking rod.

Topwater Walking Lure – If ever there was a prime time for topwater lures – it’s now, and VanDam says lures like Strike King’s Sexy Dawg have magnetic qualities.

“A topwater like the 4.5” Sexy Dawg has incredible drawing power. You can attract bass from far away to come bite it in clear to stained water, as long as there’s not too much wave action on the surface,” says VanDam.

VanDam uses a higher speed 7.3:1 reel for this lure, and prefers 50-pound braided line. “Braid is so much easier to get the lure to walk, plus you get better hook-ups when they bite,” he explains.

Jerkbait – Kevin VanDam and jerkbaits go together like October and falling leaves, and he says that few lures search-out bass on shallow, flat, main lake, secondary points like this one.

“Again, not every bass in the lake swims to the back of a creek in search of shad at this time of year,” emphasizes the 4-time Bassmaster Classic Champion. “There are plenty of quality fish to be caught on the shallower flat points on the main lake too. And by keeping your boat in about 10-feet of water, and casting up there to four or five feet of water on those types of points, can be an awesome way to catch ‘em at this time of the year,” emphasizes the 4-time Bassmaster Classic Champion.

VanDam emphasizes the need for a quality reel capable of making long smooth casts for jerkbaits, and currently relies on Quantum’s new Smoke S3 in a 6.1:1 spooled with 12-pound fluorocarbon.

From first downs to falling leaves, autumn is indeed an awesome time of the year to catch bass chomping on baitfish, especially with three lures chosen by Kevin VanDam arrowed squarely into your bass fishing knowledge base.

You can get all the tackle KVD uses here.