RALEIGH, N.C. (March 26, 2019) – It took virtually no time for the chunky northern-strain largemouth of North Carolina to reveal themselves on Major League Fishing® (MLF) Bass Pro Tour’s Day 1 of the Favorite Fishing Stage Three Raleigh presented by Evinrude: Jason Christie boated a 7-pound, 12-ouncer just 4 minutes into competition on Jordan Lake, the first fish of the day.
Christie’s opening shot was just the beginning: By the end of Shotgun Round 1, 11 7-pounders and 48 fish over 5 pounds made it onto SCORETRACKER

, an astoundingly impressive showing for an unknown fishery that most of the field of 80 had never even seen before practice.
But even more impressive was the fish-catching clinic put on by Kelly Jordon.
Fishing his way around a shallow creek arm of this impoundment of the Cape Fear River system north of Raleigh, the Texas pro piled up 82-4 on 26 fish, not only winning the round by over 18 pounds, but also establishing a new single-day MLF Bass Pro Tour weight total.
“It was just an awesome, awesome day,” Jordon said. “This area had gotten a ton of rain, and then the water dropped so much, I thought ‘Maybe this isn’t going to happen’, but guess what? The fish are still here. There’s no telling how much I could’ve caught if it had stayed warm. But what a fishery.”

Jordon did the majority of his damage with an Evergreen Jack Hammer bladed jig with a Lake Fork Tackle Live Magic Shad trailer, and he did it consistently for the first five hours of competition, pinging SCORETRACKER with four to five scorable largemouth per hour until he hit a brief lull late in the afternoon. 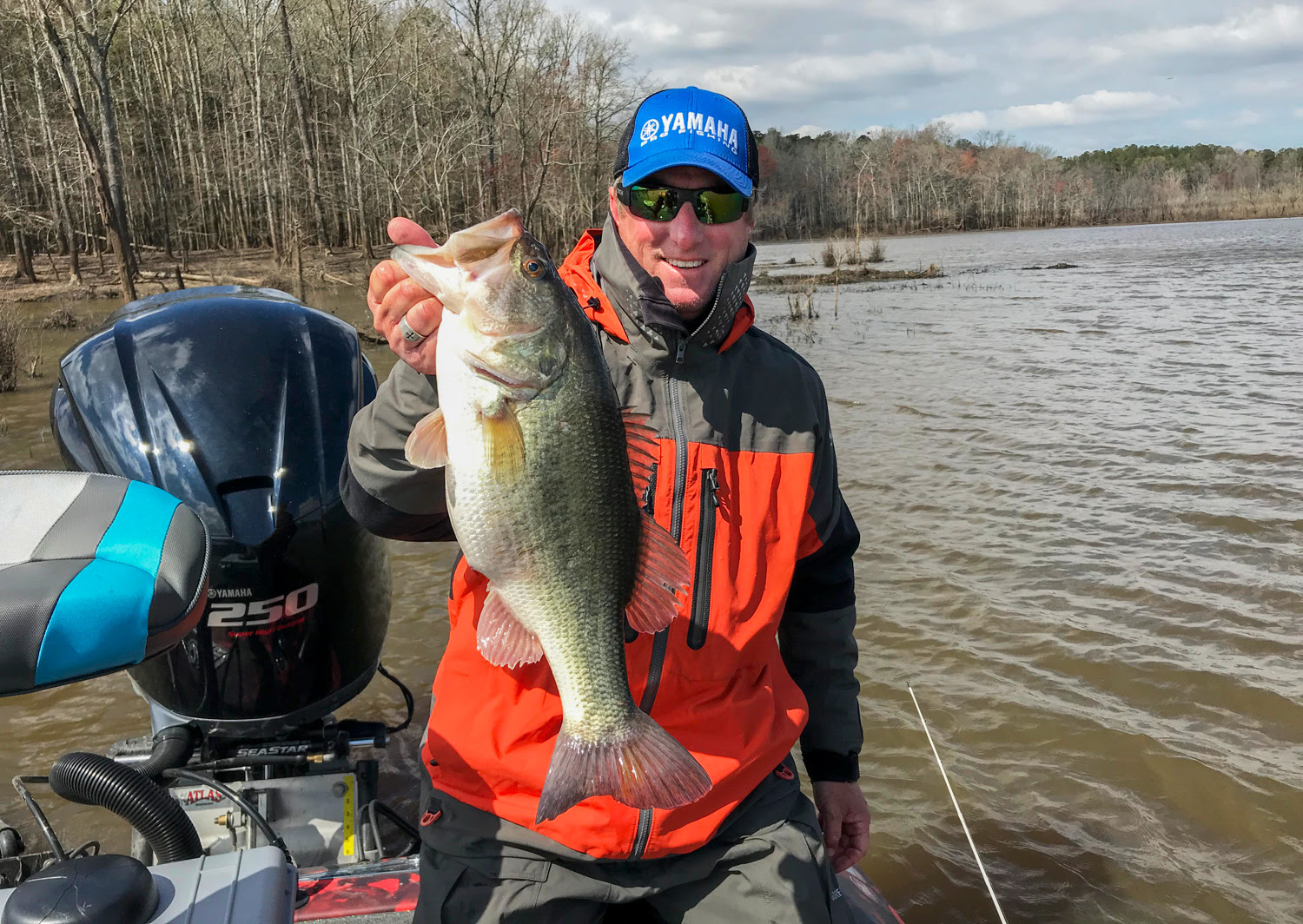 He found some good ones, too, highlighting his day with seven 5-plus-pounders, including a 5-2 and 5-6 in the final five minutes of competition.
“Anytime you catch 82 pounds in a day of fishing is an awesome day, and I didn’t want to quit fishing,” Jordon admitted. “It was sad, I wanted to keep fishing because they were starting to fire off again. It was one of those days to remember.”
The rest of the field, while lagging a sizeable distance behind Jordon for most of the day, had some notable success as well.
Todd Faircloth chipped away at Jordon’s lead all afternoon, finishing the round with 63-10
and connecting with the biggest fish of the day, a 9-4 giant that inhaled a jig early in the third period. Faircloth stacked up over 35 pounds of largemouth in the final period to trim Jordon’s lead to 10 pounds before K.J. caught his final two 5-pounders.
“We had that front pulling through, the lake dropped a little bit from yesterday and I started out fishing on the points, fishing out a little bit, and caught a couple small fish and at the end of the first period,” Faircloth said. “I decided to just change areas and change techniques, and boy did it pay off in big ways.”
Jacob Wheeler and Mark Daniels, Jr. combined for 102-7, Wheeler with 54-5 and Daniels with 52-1. In one 2 ½-hour stretch in the third period, Daniels caught five fish for 27-13. Nine of Wheeler’s 14 fish were 4 pounds or better.
Edwin Evers continued his season of consistency, catching 19 fish for 50-6 and fifth place. That marks Evers’ fourth consecutive round finishing in the Top 5.
Surprised … or Not?
The field’s big-fish success didn’t come as a surprise to MLF NOW! analyst Marty Stone, who touted the big-fish potential of the Raleigh-area lakes, and was instrumental in bringing the Bass Pro Tour to North Carolina. As Stone repeatedly reported in the weeks leading up to the event, Jordan Lake was set up for a record-breaking performance, despite the fluctuating water levels.

“I think the size of the fish caught these guys off guard a little bit,” Stone said.

The number of fish caught was definitely a surprise to much of the field, too. Thanks to plummeting water levels and dirty water, many of the pros struggled mightily in practice, and most expressed some doubt that they would catch many fish on Jordan. But as he stowed his rods at the end of the day, Wheeler summed it up best: “What can you say? This place is legit!. I mean, wow, it’s got ’em.”
Group B Up Next
The second half of the field gets its first crack at Jordan Lake on Wednesday when Group B competition begins. Conditions could be slightly more challenging in the morning, as nighttime lows will dip to near freezing, but a forecast of afternoon sunshine translates into a possible strong afternoon bite.
Looking Ahead to the Week
The field will carry their Shotgun Round weights to Falls Lake on Thursday and Friday for the Elimination Rounds. The Top 20 anglers from each Elimination group will advance to the Knockout Round on Saturday (also on Falls).
The Top 10 anglers in the Knockout Round will advance to the Championship Round on Shearon Harris Reservoir, a 4,100-acre power plant lake that’s known for its population of 6-plus-pound largemouth.
How, When, Where to Watch
Competition begins daily at 7:30 a.m. EDT, with live, official scoring available via SCORETRACKER on MajorLeagueFishing.com and on the MLF app. The MLF NOW! live stream starts at 10 a.m. EDT, with live, on-the-water coverage continuing until lines out at 3:30 p.m. The Berkley Postgame Show live stream will start at 5 p.m. daily.
Quotable
Kelly Jordon (1st/82-4) – “The water was dropping out in my area, and I thought the fish were leaving. I think a lot of them did. I was scared to death: It rained last night, and I thought it was just going to blow (that area) out, which it didn’t. It did get kind of muddy in there, and probably dropped 6 to 8 inches. Coming out, I had to jump over a beaver dam. I had to put my engine up on it and power over it, and I’ve never had to do that before. Boyd (Duckett) showed me how to do that, because he does it all the time. I figured I would just gun it and try it, and that’s what I did.”
Jacob Wheeler (3rd/54-5) – “All I can say is ‘Wow!’ It’s a phenomenal fishery. It seemed like every bite was 3 to 5 pounds or 5 to 6 pounds. Overall, the number of quality fish that live in that lake is just astounding. You would’ve thought with that cold night, it would get a little tougher, and it didn’t seem that way. This morning I didn’t know if it was going to be that hot and heavy first thing, but I figured when the sun popped out, it would probably be pretty decent. It was pretty consistent all day.”
Edwin Evers (5th/50-6) – “I got some bites early, and that’s just what I needed to get my confidence going. I was just running with it and expanding on it, and man I’m just happy. The last day of practice I kind of figured this deal out, and I’m just happy to have it. I don’t know if I can get a bite on (Falls Lake).”
The Day’s Results
To see all results from Shotgun Round Group A anglers, and to keep up with cumulative results throughout the week, visit MajorLeagueFishing.com and click “Results.”
###
About Major League Fishing
Founded in 2011, Major League Fishing (MLF) brings the high-intensity sport of competitive bass fishing into America’s living rooms on Outdoor Channel, Discovery, CBS, CBS Sports Network, World Fishing Network, Sportsman Channel and on-demand on MyOutdoorTV (MOTV). New for 2019, the Bass Pro Tour consists of eight events and a championship streamed live on www.MajorLeagueFishing.com and MOTV. MLF uses the entertaining and conservation-friendly catch, weigh and immediate-release format where every scorable bass counts and the winner is the angler with the highest cumulative weight. For more information on the league and anglers, visit www.majorleaguefishing.com and follow MLF on Twitter, Instagram and Facebook. For more in-depth coverage, see Game & Fish magazine, the official publication of MLF.