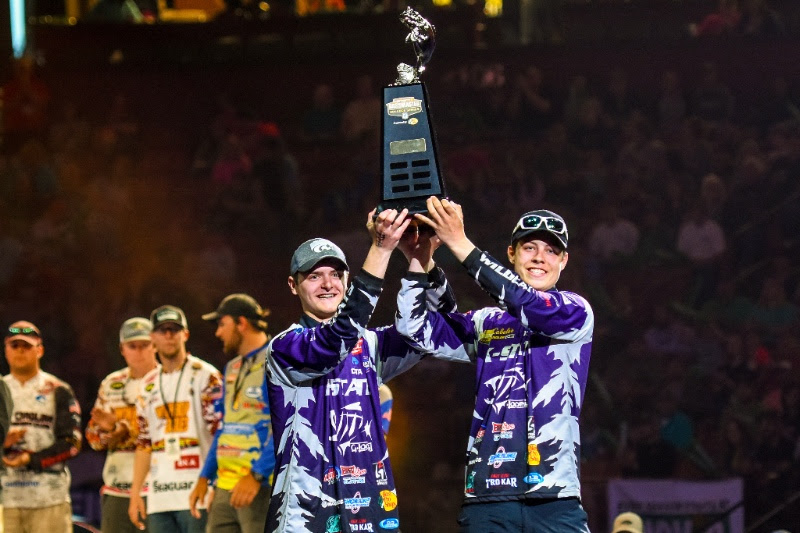 Committing their day to dock fishing, the winners focused on precise presentations that adjusted with fish movement.

“As the sun came out, the fish moved farther and farther under the docks, so we were skipping our baits father under there where nobody else was reaching,” Vielhauer said. “We had never fished this lake before. But in practice, we went all the way from the south end, all the way up to the north end; so we were able to eliminate the whole north end and concentrate on the south end.”

“With the clear water, we were able to get those baits under there and the fish weren’t able to see the line,” Vielhauer said. “But, we work well together as a team and if one of us was unable to make the pitch or the cast, the other one’s able to do that. So, we alternated.”

Andrie said he and his teammate started deeper, but they ended up spending most of their time fishing in 2 to 10 feet of water. Following a rotation that they had established in practice, they fished 25 to 30 docks.

Their action started early with four keepers in the first 20 minutes.

“Most of the fish we caught today were prespawners; they had big bellies and they were ready to go,” Andrie said. “They were staging to do their thing, but we intercepted them today.

“Today, we predominantly had spotted bass — the biggest spotted bass we had all week, but we did find a couple of those key largemouth that really did it for us.”