Justin Lucas caught a momentous fire of top finishes this summer on the Bassmaster Elite Series trail that was hotter than his native State of California’s summer sun. He fished his way to five Top 12 finishes in a row to round out this season. And his laser focused competitiveness continued Sunday at Lake Chatuge, Georgia, where he finished 7th to win the Toyota Bassmaster Angler of the Year points title, something only 23 men in history have done. 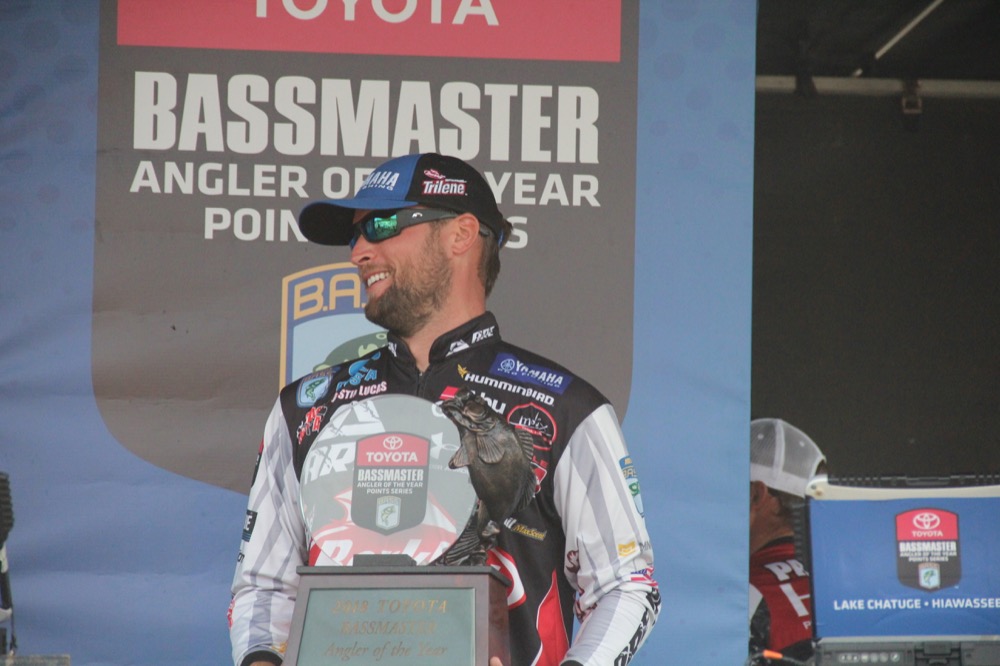 He kept his emotions in check on stage in front of thousands of fans until he spoke of his grandfather taking him fishing. “My grandfather took me fishing in my first bass tournament around Sacramento when I was 12-years-old, he’s still alive today, and this trophy is for him,” said Lucas, choking back tears, and urging fans to take a kid fishing.

“I didn’t want to become a pro angler to collect logos on my shirt, I wanted to fish for a living purely because I love it, and when I think about being only the 23rd guy in history to win this title in the 51 year history of B.A.S.S. — that’s so humbling,” he said on stage.

Surrounded by family after raising the trophy, it became apparent Lucas is the product of a loyal group of souls that adamantly support his professional angling career, and likewise, Lucas has been hugely loyal to Toyota, buying three Tundras throughout his young but prolific career.

“I drive a Tundra because as a tournament angler, the Toyota Bonus Bucks program pays me cash money when I do well. I’m guessing I’ve won almost $15,000 during my career from the Bonus Bucks program. Plus, I love the way my ARE truck cap looks on it, and it’s just a really comfortable tow vehicle,” says Lucas.

Indeed, loyalty has its rewards, and so does a run of Top 12 finishes undeniably worthy of professional bass fishing’s most respected trophy.

However, you don’t have to be a Bassmaster Elite Series pro to win the “Bonus Bucks” – you just have to be a registered participant in the Toyota Bonus Bucks Program, and be the highest-placing participant in any of the dozens of tournaments supported by the Program. To learn more and get signed-up, please visit www.toyotatrucksbonusbucks.com or phone (918) 742-6424, and ask for Kendell and she can also help you get signed-up.