A new school year, an apple for the teacher, a fresh football season, and bass busting on the water’s surface to eat baitfish are all signature marks of late summer and early fall. And while back-to-back Bassmaster Classic Champ Jordan Lee admits he wasn’t exactly a stellar student, the man does know a thing or three about catching schooling bass on a topwater lure. 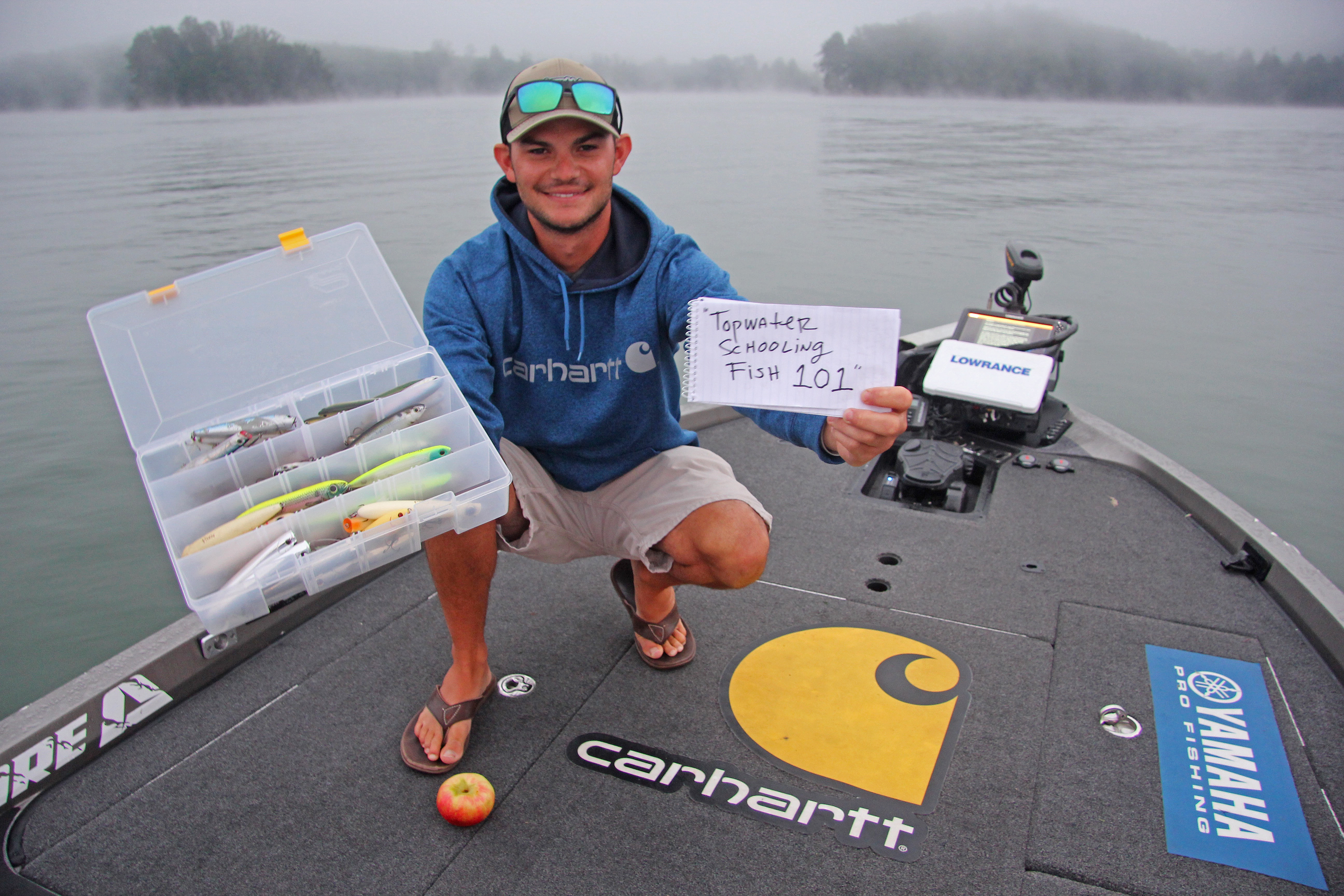 “I mean look, I’m not gonna lie, I failed a class or two while at Auburn, but I got pretty good at catching ‘schoolers’ on Lake Mitchell while I was there,” grinned Lee on the final morning of practice at the Toyota Bassmaster Angler of the Year Championship on gorgeous Lake Chatuge in Northern Georgia.

“The first step is to be aware that bass will school-up and bust the surface to feed at all times of day during this time of year,” says Lee.

“Even when I’m running down the lake at 60 mph, I’m keeping my eyes peeled to see ‘em busting. I’m looking for birds diving on bait balls, and just constantly staying alert and aware. And the best topwater school I saw during the second day of practice on Chatuge was at 2:00 in the afternoon.”

While the sight of bass busting the surface can cause the same adrenaline rush as a long touchdown pass, Lee advises anglers not to rush in once schooling activity is apparent. “I’m not a fan of using your outboard to get within casting distance of schooling fish. I prefer to sneak over to them with my trolling motor,” says Lee.

This is not a game for casting small poppers or buzzbaits across the surface. “One of the absolute biggest keys to reaching schooling fish is to have a heavy topwater walking bait,” says Lee, with emphasis on ‘heavy’ to help cast it a long way.

“If you’ve got a heavy enough lure, you should be able to cast at least 40 yards, if not further. And that’s so key, because you want your lure to reach the fish obviously, but if you get too close you’ll spook them, and they’ll stop eating, so you gotta have a heavy walking bait,” he explains.

While many weekend anglers still stray from braided line, Lee believes it’s a game-changer to better connecting with topwater schooling bass. However, there’s a bit of a twist, in that he actually ties a monofilament leader to the 40-pound braided mainline.

“Braided line not only provides you plenty of strength when you’re casting these heavier baits, but it also helps you get a way better hookset when a fish bites at the end of long casts you have to make when chasing ‘schoolers’,” he says.

“But I tie a monofilament leader between my braided main line and the lure, because mono tends to tangle on the front treble hook a lot less than braid,” he explains.

“Man, I can’t remember what class it was for sure. It might have been Calculus II, but I had to take it three times before I finally passed it to get my degree,” laughed Lee.

No worries, Champ. You’re earning high honors in professional bass fishing’s toughest curriculum, and “Topwater Schooling Fish 101” seems to be one of your best classes.