Bassmaster Classic Champion Jordan Lee played a lot of baseball in his younger years growing up around Cullman, Alabama. And right now, the easy-going 26 year old feels a lot like one of former Yankees icon Yogi Berra’s famous quotes, “It’s like déjà vu all over again.” 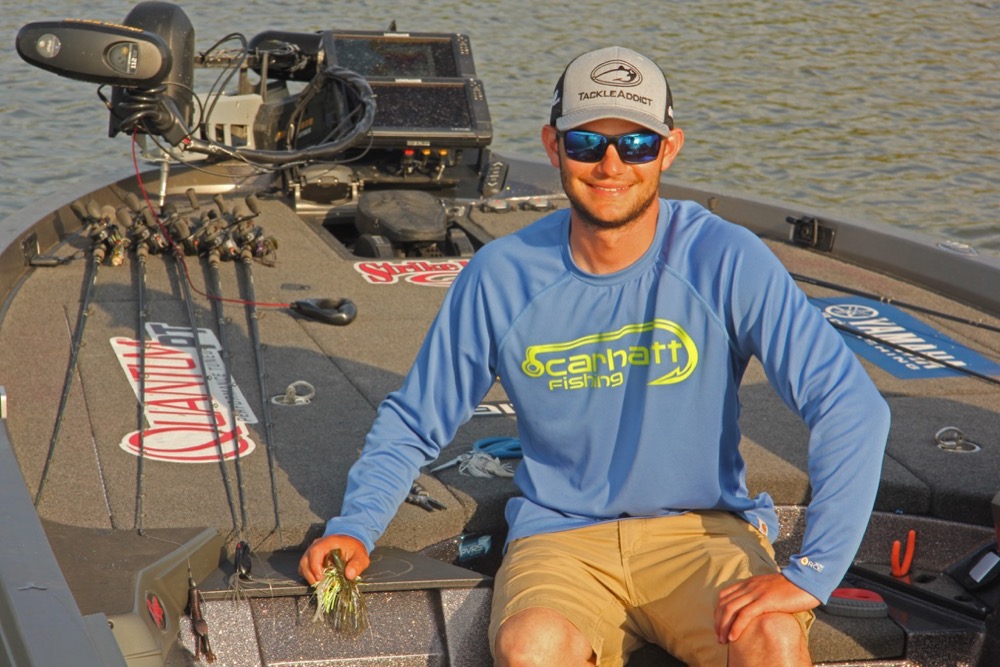 Fire up the Tundra and head straight to the next event at Kentucky Lake, realize once again there’s bass on spawning beds poor water clarity won’t permit you to see.

“There’s a lot of bass on beds here, but it won’t be much of a sight fishing tournament because the water’s been high and off-colored, and beds are hard to see here, just like at Grand Lake last week,” says the Quantum pro.

And much like Northeast Oklahoma last week, the weather forecast is one to make the Chamber of Commerce proud here in Henry County, TN. Lots of sunshine and temps perfectly suited for nothing more than the Carhartt Force long sleeve shirt you seeing Lee wearing here.

“I averaged 17 pounds a day at Grand and finished 10th, and I’m guessing that’s just about exactly what it’ll take here for a Top 12,” he says.

Unlike Grand, the water is in the bushes on Kentucky Lake, but it’s falling fast. And while there’s tons of shallow habitat to cast or pitch to right now, the TVA will likely suck as much as 2-feet of water out of this massive reservoir by competition … which again, could bring flashbacks of Grand’s mostly dry shoreline habitat.

Still, just like Grand, Lee feels this will be a shallow water tournament. “The water temps are in the 60s and warming daily, fish want to be shallow. I’m not saying somebody won’t slip off the bank and win off a gravel bar or shell bar, but for the most part there’s going to be a lot of guys fishing shallow,” says Lee.

Finally, there’s the intangibles that seem so similar with Jordan Lee at Kentucky Lake, just like Hartwell, Conroe, and Grand – he’ll be one of the very last anglers to leave the boat ramp.