If life’s goodness were measured in pounds and ounces right now for young Bassmaster Classic Champion Jordan Lee, it’d be the equivalent of a monstrous 27-pound 4-ounce limit of bass.

Away from the water, Jordan got engaged to his sweetheart of three years, Kristen, launched his own signature series Classic-winning football jig at ICAST, and discovered his new favorite fishing reel. 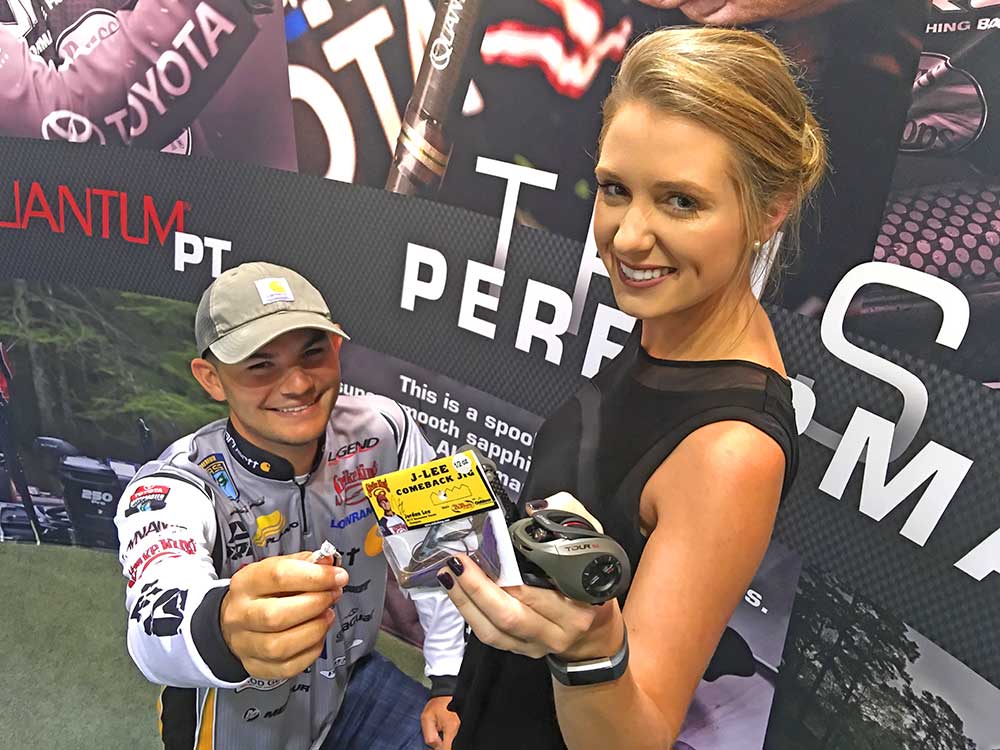 No surprise, Jordan first became smitten with Kristen at his first-ever Bassmaster Southern Open on Lake Toho, Florida where she was working the tournament registration as a marketing assistant at Power-Pole.

After a sweet three-year relationship that oozes cuteness each time they’re seen together, Jordan bought his bride-to-be a beautiful pear-shaped diamond engagement ring at Ed White Jewelers in his hometown of Cullman, AL.

“We actually looked a rings a year ago, but I’m proud to say I never pressured him to get married,” says Kristen. “I wanted him to propose when he was truly ready, not because so many other people were telling him he should, or asking us when we would get married.”

Lee was logical in his approach to making a lifetime commitment, often assuring Kristen he loved her, but wanting to make sure he was financially secure and standing on stable ground in the fishing industry before he asked her to be his wife.

So on a trip home to North Georgia to see Kristen’s parents, that included a fishing trip to Lake Lanier of course, the two planned a date to a local vineyard where Jordan popped the question and presented the gorgeous diamond ring.

Diamonds are not only a girl’s best friend, but are actually super tough, and at the top of the hardness scale, just above sapphire for natural gems and materials. And fresh off diamond shopping, Lee discovered a sapphire jeweled spool tension washer inside his favorite new fishing reel at ICAST.

The new $199 Quantum Tour S3 features a super-hard sapphire plated washer inside the spool tension knob, creates a smoother, harder surface for the spool shaft to turn against. That leads to much improved longevity in the reel Lee couldn’t keep his hands off during his time in the Quantum booth at ICAST.

When not in the Quantum booth, Jordan and Kristen could often be found at the Strike King booth proudly sharing the new “J Lee Comeback Jig” with media and retail dealers.

“It’s made of round, old skool, living rubber strands as opposed to the silicone strands that most jigs are made of,” explains Lee.

“Living rubber has more action than silicone, even when the jig is sitting still on the bottom of the lake, and I think that played a big role in getting so many quality bites that final day on Lake Conroe,” he says.

“Living rubber just ‘breathes’ better, and big fish can’t stand not to bite it,” believes Lee. “This is a structure jig for casting in 8 to 30 feet of water, and dragging slowly across the bottom. We’re making it in 1/2, ¾ and 1-ounce.”

When asked to choose just two favorite colors of the new jig, he chose Peanut butter and jelly, and plain ‘ol brown. He ties the jig to 15-pound fluorocarbon, and fishes it on a 7.3:1 Quantum Tour S3 for plenty of speedy line pickup when a bass bites in deep water.