Jordan Lee might have been resting on his haunches while tying on baits prior to Day 3 of the Bassmaster Elite on Lake Okeechobee. But that’s where the hunkerin down stops for the young Alabama pro that has remained in the Top 20 of the standings each day. 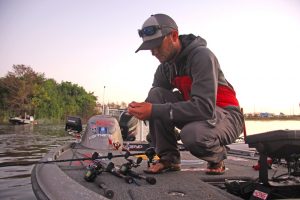 “That’s what everybody says when you come to Florida – that you gotta hunker down in one small area where you know there’s fish, and just be patient. But that’s not what I’m doing,” says the former Carhartt College Bassmaster champion.

“I had 11 Smoke HDs, and one Smoke spinning reel on this deck by the end of yesterday, and I’ve already got 10 out here to start today – so you can pretty much see I’m just scramblin’,” grinned the Lake Guntersville resident.

Lee says he’s well aware of the opportunity to catch giants from spawning beds here, but he’s never judged that pattern to be sustainable for three or four days in a row, so in turn he’s mixing-up his offerings in a big way.

“I’ve punched with a heavy Texas rig, I’ve fished in a crowd, caught one of my keepers from a spawning bed, thrown a topwater, and fished eel grass out in the middle of the lake. Daddy’s done it all,” grinned Lee in comical reference to himself.

“I don’t know if you’d call that ‘junk fishin’ or ‘scramblin’ – but I sure won’t be hunkerin down in one spot. Not this guy,” concluded Lee with his signature happy-go-lucky mile wide grin.