Jordan Lee of Grant, Ala., won the 2018 GEICO Bassmaster Classic presented by DICK’S Sporting Goods at Lake Hartwell with a three-day total of 47 pounds, 1 ounce. This is Lee’s second Classic win in a row. 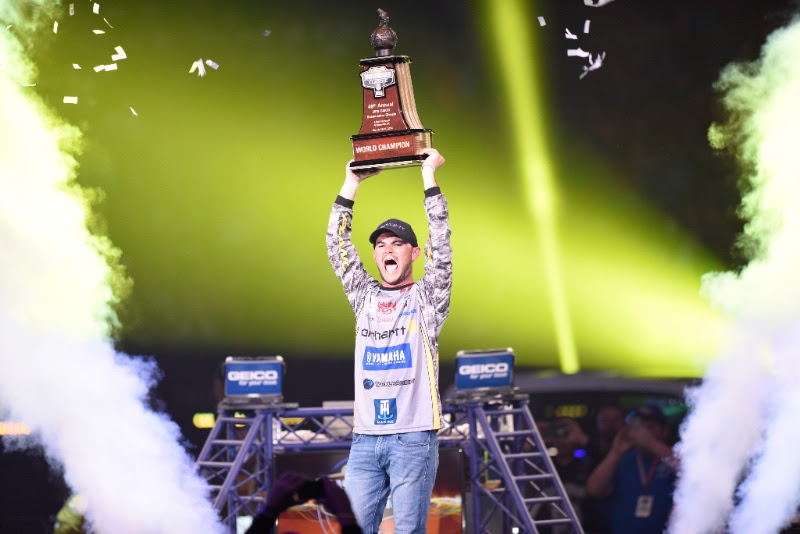 GREENVILLE, S.C. — After three magical days on Lake Hartwell, South Carolina, Jordan Lee now belongs to one of the most exclusive fraternities in professional bass fishing.

Lee, who began Sunday’s championship round in sixth place, caught five bass that weighed 16 pounds, 5 ounces and won the 2018 GEICO Bassmaster Classic presented by DICK’S Sporting Goods with a three-day total of 47-1.

Lee, who won last year’s Classic on Lake Conroe, Texas, joins fishing legends Rick Clunn and Kevin VanDam as the only anglers in history to win the Super Bowl of professional bass fishing two years in a row.

“It was just a perfect week for me. I caught fish on five different baits and a lot of different techniques.”

Unlike last year, when Lee struggled during the first round of the Classic before rebounding to win, he got off to a good start during this year’s first round with a catch of 18-10.

Since he didn’t have a good practice, he said he decided to stay within his comfort zone and fish boat docks — much like he does on Smith Lake in his home state of Alabama.

“I just wanted to cover as much water as I could to give myself the best chance of putting a bait in front of a fish,” he said. “On this lake, I knew boat docks were going to play because they always do — and that’s what I like to do.”

With no solid pattern identified, Lee alternated between a Strike King Rage Swimmer and two Strike King stickbaits — an Ocho and a Shimmy Stick. He stuck with green pumpkin and green pumpkin/blue as his primary colors.

He also caught fish throughout the week on an unspecified jerkbait and a homemade bladed jig.

“I really didn’t have a game plan,” he said. “I knew I could catch a lot of 2-pound spotted bass, and I knew those fish weren’t going to win me the tournament. But that’s what I wanted to do, and everything just kind of fell into place.”

Lee weighed in all spotted bass on Day 2 and saw his weight drop to 12-2. But he still easily made the Top 25 cut in sixth place to fish on Championship Sunday.

But being behind on the final day is nothing new for Lee, considering he started last year’s championship round in 15th place and came back to win.

Once again, he hit the jackpot on the final day.

“Today, I went in the back of this one little pocket and the water was 57 degrees,” he said. “I caught a fish — probably my biggest one of the day — and then it turned out there were bass under every dock in there.

“They were swimming around by my boat. It was just loaded.”

There was one tense moment for Lee in that pocket when he thought he might have let the historic victory slip through his fingers.

“I really thought I had lost the tournament on my last cast,” he said. “There was one bass about 4 or 5 pounds under a dock, and I pitched my worm right on it and it swirled and ate it. I set the hook and the worm popped off.

“If that one had cost me, it was going to be tough to sleep at night.”

As it turned out, though, Lee had just enough weight to edge California pro Brent Ehrler by 1 pound. Ehrler was second with 46-1, followed by Jason Christie, who led the first two days but caught only 8-11 on Sunday and fell to third place with 45-15.

“You can’t plan on winning this tournament. Everything just has to fall into place.”

Alabama pro Mark Daniels Jr. won $2,500 for catching the Berkley Big Bass of the week, a 6-11 largemouth he caught on Day 1.