CLARENDON COUNTY, S.C. — Carl Jocumsen is known for his aggressive fishing style, but it was actually a healthy dose of caution that led him to three of the five fish he needed to take the Day 1 lead of the Bassmaster Elite at Santee Cooper Lakes brought to you by the United States Marine Corps with 25 pounds, 8 ounces. 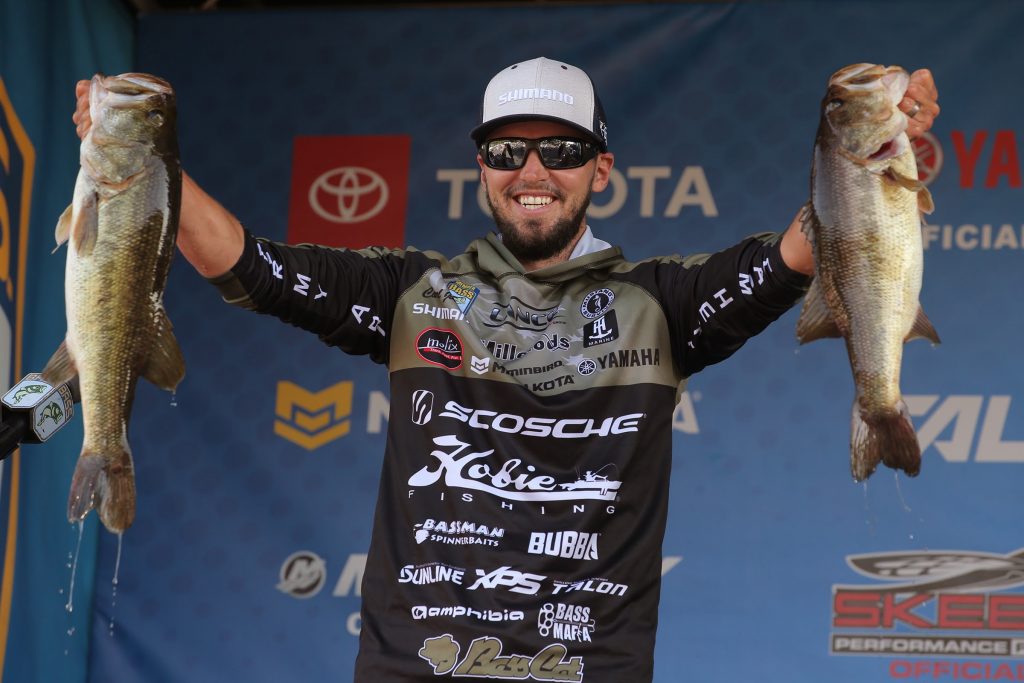 Queensland, Australia native Carl Jocumsen weighed in 25 pounds, 8 ounces to take the Day 1 lead in the 2020 Bassmaster Elite at Santee Cooper Lakes brought to you by the United States Marine Corps.  Photo by Seigo Saito/B.A.S.S.

The veteran pro from Queensland, Australia, who captured his first Elite Series win last year on Oklahoma’s Lake Tenkiller, said he started his practice with a well-founded respect for Santee Cooper’s minefield of submerged stumps. Doing so compelled him to spend more time idling.

“When you roll up to a place like this, it is scary,” Jocumsen said. “When I first launched at the ramp (in practice), I didn’t even know if you could get up on pad going out of the ramp. To go from that to a bag like this is just a magical day.

“It actually helped me not knowing this place because I got to idle some areas, not knowing how to get back in. That’s how I found a couple of little magical spots.”

With a limit that included a 6-15 and a 6-3, Jocumsen started in the midsection of Lake Marion, which along with Lake Moultrie to the south, comprises the Santee Cooper Lakes (linked by a diversion canal). His main area was a grass-lined depression that dropped from 2 feet to 4 1/2.

“If you ran the area, you would never see it, but I idled it because I was worried about getting into the back,” Jocumsen said. “I saw the grass on my Humminbird, and I think that’s what’s holding them.”

In practice, this spot hosted intense afternoon schooling action and produced several big bites. Today, Jocumsen saw minimal surface activity but caught one of his bigger fish from the schoolers.

“I got enough bites there in practice to think, ‘This is the perfect plan: early-morning schooling fish, and then go fish cover.’ It wasn’t as good as I thought it would be, but I caught a 5-, a 4- and a (3-pounder) by 10 o’clock.

“It wasn’t fast and furious, they only schooled once. The rest, I just caught flipping that area. I had it all to myself.”

After determining that his starting spot had cooled, Jocumsen ran to Marion’s north end where he flipped cypress trees. On his third flip, he caught a 6 1/2 and then filled his limit with a 2 1/2.

“Once I relaxed, I slowed down and just started fishing new areas,” Jocumsen said. “I caught another 6-plus around 12:30 and I was done.”

Jocumsen used a white Z-Man JackHammer ChatterBait with a white Yamamoto Zako trailer for the schooling fish. He caught his flipping fish on a black and blue Molix SV craw rigged on a 4/0 hook.

“It’s really how I’m working the bait; I figured out how they want it when I’m flipping the cover,” Jocumsen said. “A lot of guys do it a certain way, and I figured out what they wanted. Every single bass has bit the exact same way.”

Carrying a lead of 4-7 into Friday’s second round, Jocumsen said his productivity afforded him time to test a few areas far upriver. These distant spots did not produce, but eliminating the options allowed him to narrow his Day 2 plan.

Jocumsen is not predicting another 20-pound bag, but with Santee Cooper holding a strong population of stocked Florida-strain largemouth, he’s certainly not ruling it out.

“In practice, I fought a legitimate 9- to 10-pounder doing the same thing, so I know any single cast has the potential for a double-digit fish,” Jocumsen said. “My (main) area could get even better tomorrow, or it might not produce a fish.

“For me to catch another bag like that, I kinda need to have five in the well, because I have to slow down. Today, I eliminated a lot of areas and I gained two new areas, so I feel good for tomorrow.”

Brandon Palaniuk of Rathdrum, Idaho, is in second place with 21-1. Anchoring his bag with a 7-9 that bit around 10 a.m., Palaniuk said he caught most of his weight between 10 and noon.

“I think I just happened to roll up at the right places at the right time today,” he said. “I was trying to cover water. I started all the way down by the (Santee Dam) and went all the way up above the Interstate-95 Bridge this afternoon.

“I’m keying in on certain places, but I’m not married to one area. There’s not one specific thing I’m looking for. I’m not dialed in; I just happened to get the right bites today.”

Palaniuk said he caught his fish on three different baits today, with flipping presentations producing most of his weight.

Austin Felix of Eden Prairie, Minn., is in third place with 20-9. Spending most of his day on a 3-mile-long stretch, Felix caught his bass off cypress trees, docks and shellbars — all in about 4 feet of water. He also caught a couple of his keepers in deep holes of about 10 feet.

“It was pretty consistent all day; I had 14 pounds by 9 o’clock and then slowly culled my way up,” Felix said. “I caught a 6-pounder at noon and just started looking for new stuff.”

Felix said he caught his fish on a Texas-rigged worm. A slow dragging presentation worked best.

“I think a lot of people are fishing over these fish,” Felix said.

Palaniuk is in the lead for Phoenix Boats Big Bass of the week honors with his 7-9.

Friday’s takeoff is scheduled for 7:05 a.m. ET from John C. Land III Sport Fishing Facility. The weigh-in will be held back at the facility at 3:20 p.m. After Friday’s weigh-in, only the Top 40 remaining anglers will advance to Saturday’s semifinal round.

Live coverage of the event will be available starting at 7 a.m. on Bassmaster LIVE at Bassmaster.com and ESPN3.

The tournament is being hosted by the Clarendon County Chamber of Commerce.

About B.A.S.S.
B.A.S.S. is the worldwide authority on bass fishing and keeper of the culture of the sport, providing cutting edge content on bass fishing whenever, wherever and however bass fishing fans want to use it. Headquartered in Birmingham, Ala., the 515,000-member organization’s fully integrated media platforms include the industry’s leading magazines (Bassmaster and B.A.S.S. Times), website (Bassmaster.com), television show (The Bassmasters on ESPN2 and The Pursuit Channel), radio show (Bassmaster Radio), social media programs and events. For more than 50 years, B.A.S.S. has been dedicated to access, conservation and youth fishing.