LEXANDER CITY, Ala. (March 21, 2020) – After fishing at FLW’s top pro-level circuit for 11 years, competing in his 76th career event, pro Jason Abram of Piney Flats, Tennessee, finally got it done. Abram earned his first career victory in a dramatic finale Saturday at the Tackle Warehouse Pro Circuit at Lake Martin in Alexander City, Alabama, after bringing a five-bass limit totaling 11 pounds, 3 ounces to the scale. 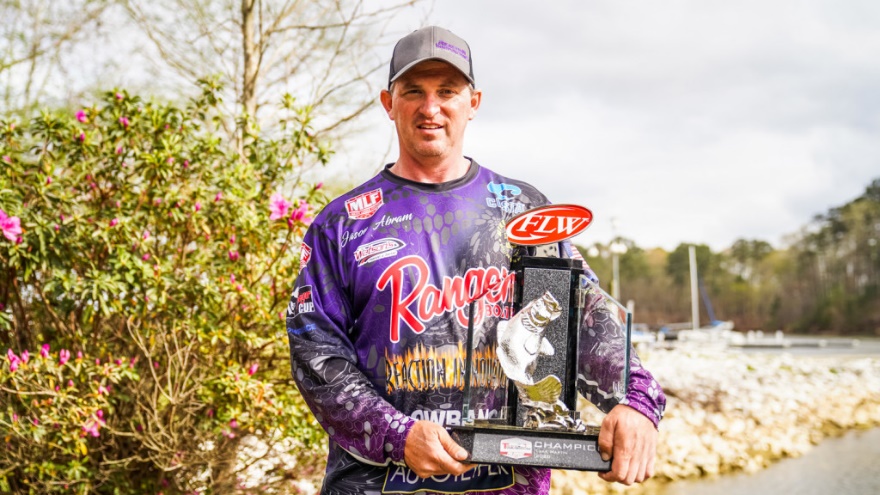 Abram’s four-day total of 20 bass weighing 52-9 earned him the victory by a 1-pound, 1-ounce margin over second-place pro Ron Nelson of Berrien Springs, Michigan, and the $100,000 first-place prize.

“I’ve been chasing this dream for as long as I can remember,” said an emotional Abram on-stage after being declared the champion. “The trophy is more important to me than the money. I’ve had a couple of good finishes, and a couple of chances to win in the past but came up short. To win today, it feels absolutely great. So great.

“Every fish that I caught this week came on a Reaction Innovations product – either a Skinny Dipper or a Flirt Worm – and the key was just covering a lot of water with those two baits,” Abram continued. “I’ve never been here before, so I just relied on my Lowrance unit. I’d see a pocket on the map and then just run it.”

The reason Abram stuck with his pattern Saturday was the same reason he’d be fishing it all week – it didn’t get many bites, but it got the right bites. In this case, a 4-pounder that couldn’t resist his merthiolate Reaction Innovations Flirt Worm walked under docks – but not just any docks.

“It had to be the last three docks in a pocket,” said Abram. “I was looking for flatter pockets with three docks lined up in the back. I could look on my graphs and quickly see which pockets looked good, which helped me fish fast, and I needed to. I caught one fish for every 15 pockets I hit.”

Abram spent roughly the first few hours of every day targeting spotted bass to catch a limit before focusing his efforts in the mid-lake region, right around where the dirty and clear water met.

“I was paralleling just random banks with a Reaction Innovations Skinny Dipper,” he said. “I think the spots were just pushing bait up against the bank, because I’d go awhile with nothing and then catch three or four quick. It’s like a pod swam up and I’d catch them.

“I’d been so close to winning before and always came up short,” Abram went on to say. “I thought I didn’t close it out again today. But I stuck to what I thought I could win this thing on, and I was rewarded.”

Complete results for the entire field can be found at FLWFishing.com.

Overall there were 50 bass weighing 107 pounds, 6 ounces caught by pros Saturday. All of the final 10 pros weighed in five-bass limits.

The Tackle Warehouse Pro Circuit at Lake Martin was hosted by the Alexander City Chamber.

In Tackle Warehouse Pro Circuit competition, the full field of 150 anglers competed in the two-day opening round Wednesday and Thursday. The top 30 pros based on their two-day accumulated weight advanced to Friday. Only the top 10 pros continued competition Saturday, with the winner determined by the heaviest accumulated weight from the four days of competition.

Throughout the season, anglers are also vying for valuable points in hopes of qualifying for the 2020 FLW TITLE, the Pro Circuit Championship. The 2020 FLW TITLE will be on the St. Lawrence River in Massena, New York, Aug. 8-13 and is hosted by the Town of Massena.

About FLW
FLW is the world’s largest tournament-fishing organization, providing anglers of all skill levels the opportunity to compete for millions in prize money across five tournament circuits. Headquartered in Benton, Kentucky, FLW and its partners conduct more than 290 bass-fishing tournaments annually around the world, including the United States, Canada, China, Italy, South Korea, Mexico, Namibia, Portugal, South Africa, Spain, and Zimbabwe.

FLW tournament fishing can be seen on the Emmy-nominated “FLW” television show while Bass Fishing magazine delivers cutting-edge tips from top pros. Acquired by Major League Fishing in late 2019, FLW is expanding its programming in 2020 to the Outdoor Channel and the Sportsman Channel as well as on-demand at MyOutdoorTV (MOTV).