The 2018 Bassmaster Elite Series season concludes this week with the crowning of a Toyota Bassmaster Angler of the Year Champion on gorgeous Lake Chatuge Reservoir in the mountains of Northern Georgia, on the North Carolina border. 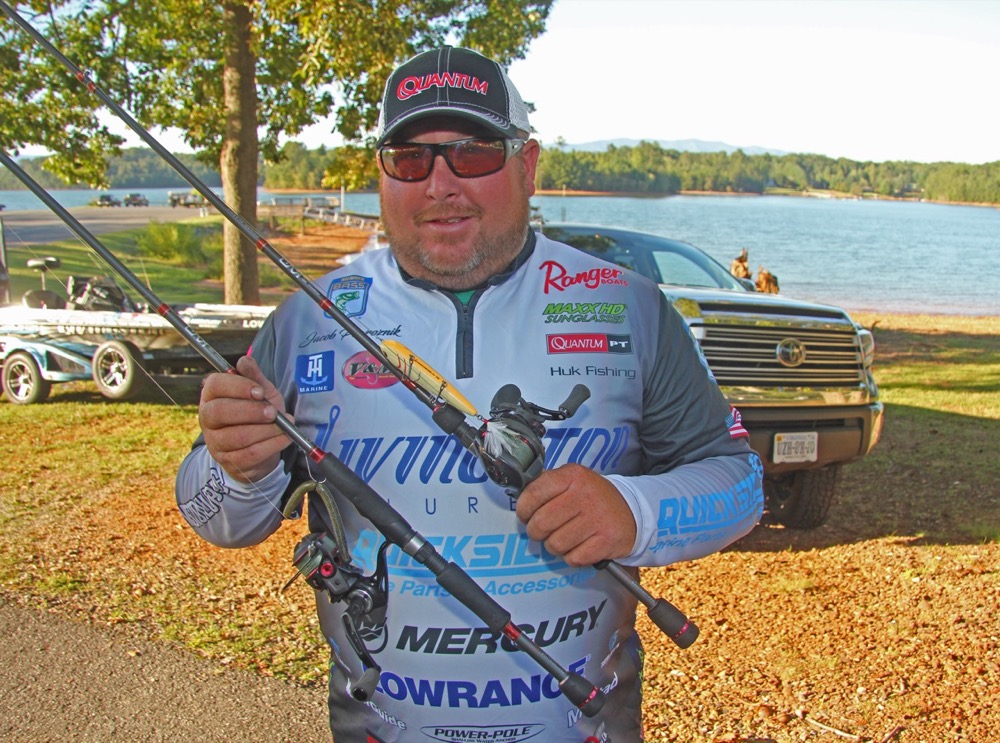 It’s a small body of water where the Elites have never competed previously. But Quantum pro Jacob Powroznik who has had one heck of a year, and sits inside the Top 10 of the prestigious season-long points race, graciously helps fans grow a little more familiar with the postcard perfect patch of water with a deep Cherokee heritage.

Q: Jacob, paint a picture for angling fans to give them a feel for how Chatuge sets up as a bass fishery.

J-Proz: It’s surrounded by mountains and it’s awesome looking. The water is pretty clear, but not super clear. There will be guys who fish in a wide range of water depths here. The surface temp is still hot at 82 degrees; so it’s pretty much a summer pattern, with a lot of surface schooling activity as largemouth and spotted bass chase both shad and blueback herring.

Q: Tell us about the structure and habitat.

J-Proz: Man, you’ve got tons of red clay points, plus brushpiles, and docks. It’s gonna be “all out, game on” – guys will be running around doing a variety of things from really shallow, to pretty deep.

Q: This reservoir is a really pretty place, but it’s only 7,000 surface acres, which is very small compared to most Elite Series playing fields, will pros be crowded, or is there plenty of water for everybody?

J-Proz: Nah, it’s gonna be crowded. Here’s the deal, I can run my Ranger from one end of Chatuge to the other in about 8 minutes, but it does have plenty of shoreline habitat to cast at in between.

Q: Compare this reservoir to places where the Elite Series has fished before.

J-Proz: It looks a lot like Lake Martin in Alabama where we kicked-off this season way back in February. And it shows a little bit of resemblance to Buggs Island where B.A.S.S. used to go back in the day.

Q: Rattle of a list of lures we’ll see pros throwing this week on Chatuge.

Q: When the green flag drops on Thursday morning, how’s it going to fish?

J-Proz: Well, it’s no secret that surface schooling activity is key here, especially early. So you’ll see guys pick-off a keeper or three, then maybe hit a lull for an hour or two, then go do something different and catch a couple more. It’ll be sort of wide-open. But I think 14 pounds a day here will get you a really high finish – and you might even win if you have 14 pounds a day.