We proudly introduce you to a deadly lure concept that is missing from most anglers’ arsenals. Fred Roumbanis encouraged Matt Paino and Ima Lures to build it and now Fred tells you all you need to know to hit the water with it this spring. 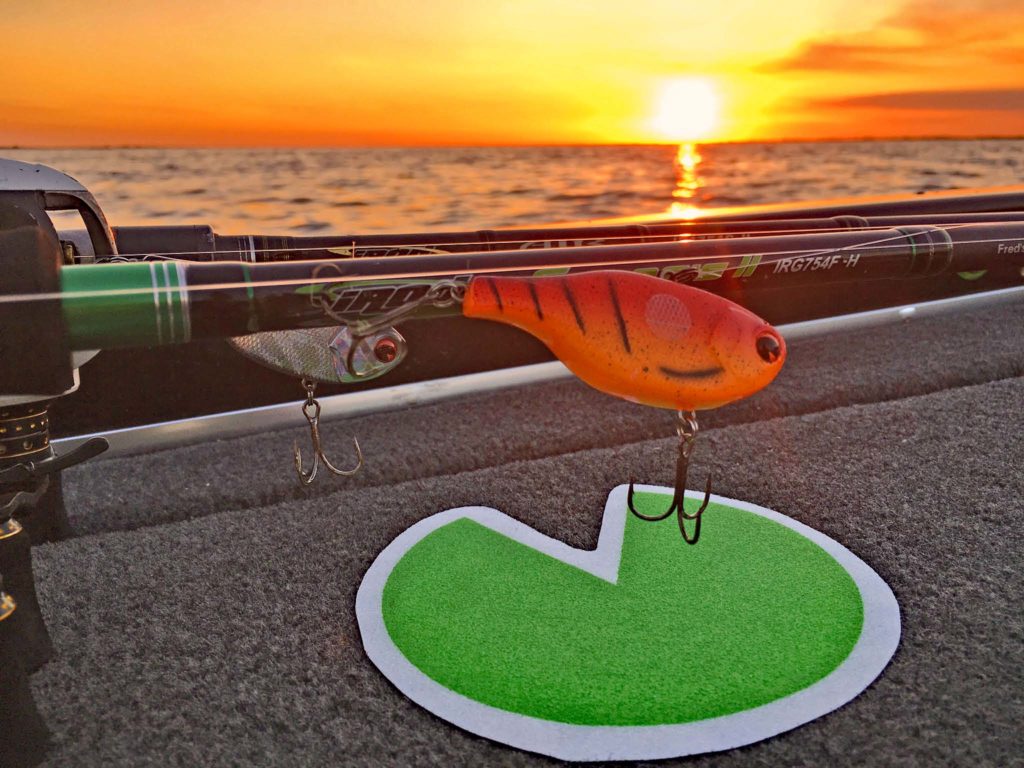 “The Ima Suspending Vibration embodies a suspending lipless crankbait lure concept that I’ve wanted to produce with Matt Paino and Ima Lures for a long time,” says top bass tournament pro Fred Roumbanis of Russellville, Arkansas. “It is not an entirely new idea because looking back over the years, a couple of other vendors have attempted it. However, it never really took off and in hindsight, it seems that other lure manufacturers never quite put the suspending lipless crankbait idea together in a way that worked well or caught on with bass anglers – until now.”

“Early in the year as things start warming up and the fish start migrating shallow obviously because they want to spawn…well, you can kick off the season with a suspending jerkbait even while bass are still in late wintering mode with cold or even frigid water- and guys will continue to use the suspending jerkbait through prespawn, right up until the spawn.”

“Well, the Ima Suspending Vibration bridges the early season gap between the suspending jerkbait in open water and the typical sinking lipless in grass.”

“Being suspending, you can fish it just like a jerkbait, you can throw it out there, and zip it, kill it and let it sit there, watching your line until you see your line jump. The Suspending Vibration is similar in that way to a jerkbait and can be fished a lot like a jerkbait except of course it is a lipless crankbait.”

“What’s cool is that you can carry that same tactic over to bed fishing. You can throw it across spawning flats, zip it up to a suspected bass bed, and kill it – and let it stay suspendedright there where potential nesting fish are, and they go crazy over that. It is absolutely deadly.”

“Now, Ima has created a lipless crank that can trigger that same reaction in open water. The Suspending Vibration hits those same instincts and bass are going to bite it without having to rip it through grass.”

“Now you can get the same kind of instinctive strike reaction out of fish even when you’re going down a flat bank, a 45-degree sloping bank, a riprap bank, around bridges or whatever. As you’re reeling it and you kill it, it stands still, provokes their attention, they focus on it and then when it takes off again is when they grab it – and you can mimic that on every single cast anywhere whether you’re in grass or not – and that’s what’s the big deal about the Suspending Vibration.”

“It takes the concept of ripping a lipless crankbait through the grass and extends that concept out into open water. Usually when you kill a typical sinking lipless, it sinks to the bottom in open water – the grass is not there to catch it and stop it. The thing with the Suspending Vibration is it just stops dead in its tracks; it stops and holds without needing grass to stop its fall. It’s a much more natural action in that a baitfish typically flees in a startled burst and then it just stops and suspends motionless because it has nowhere to go sometimes – and by not moving, that is a way to be overlooked or not attacked if it doesn’t move – kind of the same as a person having no other chance or choice than to risk ‘playing dead’ if being pursued by an aggressive bear. So by freezing motionless, that’s a very natural baitfish action, and then when it panics and tries to bolt, it gets attacked.”

“Anytime you deflect any kind of crankbait, we all know that’s what triggers bass to bite, and now you’re able to create a deflection without ever having to crash into anything; that’s the key to this bait, not to mention you can let it sit there and suspend for long periods of time if fish are inactive, they may let a moving crankbait go by, safely passing through their attack range without bothering to do anything – but when it suspends and stays in their space, the longer it sits there, they’re going to do a slow burn and eventually lash out to eliminate it.”

“Fish Allure is the coolest thing – little scent tabs or strips that are water-activated,” exclaims Roumbanis. “Never before has it been so easy and mess-free to apply scent to hard baits. They’re like little decals that I stick on the sides of the Ima Suspending Vibration so that when you let the bait suspend, it is releasing scent. The Suspending Vibration is perfect for this because the sides are broad, flat and it’s the perfect shape. If you haven’t tried it yet, you’ve got to check Fish Allure out. It’s a pretty cool deal and it really adds scent appeal. It’s not only the lure action, the color and everything else that gets their attention but they can get a whiff of the Fish Allure tab to convince them to strike even while you let the Suspending Vibration sit there.”

Fred prefers his signature series iRod IRG763CC-MH Crank Launch Jr which is a 7’6” crankbait rod that has the perfect tip and backbone for the Suspending Vibration.

He doesn’t like too fast of a reel for a lipless crankbait. Fred finds an Ardent Apex Grand 6.5:1 aluminum frame baitcasting reel to possess the perfect cranking speed, lightweight and high strength required here.

“Any time you use a line that’s not denser than water – your monofilaments, copolymers and lines that float – your bait is going to stay higher, not dive as deep and in the Suspending Vibration’s case, it will suspend more neutrally in the water,” explains Roumbanis emphasizing, “Sometimes that’s the key to a bait like this, especially in the early spring.”

“Ardent Gliss is a floating fishing line that helps keep the bait up high and suspend even better than any other line types. Gliss will keep the bait suspending superbly because Gliss floats. Its other huge advantage is it acts as a visible strike indicator. Because Gliss floats on top of the water, you can easily see the line jump when a bass hits the lure even while it’s suspending motionless.”

If you want to make a super-slow sinking bait out of it, you can change it from suspending to slow-sinking by switching the hooks out to heavier gauge wire hooks or by using thicker diameter fluorocarbon line to sink it down a little more.

However, for true suspending action, Fred sticks with the original size hooks, rings and 15 lb test mono as the best overall monofilament line size. If he wants to keep it up even high in open water, he may go to 20 lb mono or 40 lb Gliss.

If he’s fishing around grass, he’ll definitely go with 40 lb Gliss because this single strand filament shares a trait similar to traditional braided lines in that Gliss cuts right through grass easily.

Now you have learned a lure concept and technique that’s missing from most anglers’ arsenals. Best of all, many exciting new Suspending Vibration techniques remain to be discovered – by you! Get some now and have fun experimenting with new ways to catch bass on the Ima Suspending Vibration all season long. Don’t miss this!

From upper left, clockwise, Sexy Pearl Shad (white-bellied) and Silver Lining (chrome-sided) are two prime producers on shad-based fisheries. Ghost Ayu (translucent) can be a good shad color on light green-stained waters. It also produces wherever shiners exist in the food chain. Throw Foiled Gill on waters or in areas that abound with small sunfish, perch or crappie as a food source. Always try Firetiger and Delta Fire Craw because you’ll often be pleasantly surprised by their effectiveness!