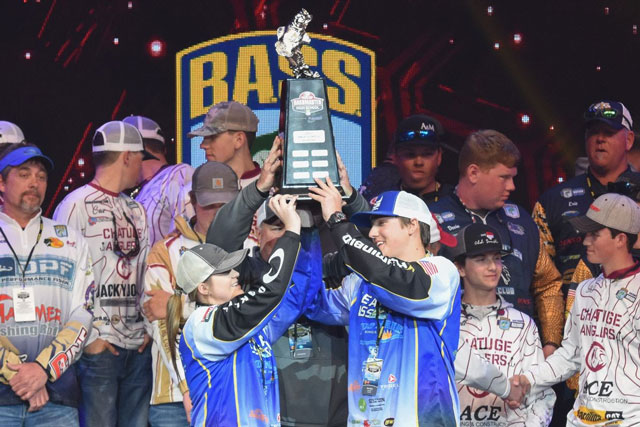 Hailing from Headland, Ala., the winners found their bass in creeks. Herbold said their bites varied from the mouths to the backs of the creeks, but the key was targeting chunk rock, which held heat.

“It really just depended on where the fish were,” Herbold said. “A lot of times, they were just cruising, and we picked them up.”

Cherry said he and his partner fished Strike King Redeye Shad Tungsten 2-Tap and Strike King 2.5 squarebill crankbaits. Red proved to be the best color for both.

“I think they would have eaten either one, you just had to get it in front of them,” he said.

The key to doing that was a run-and-gun strategy, which took them to 20 different spots.

“He caught three fish back to back in one little area, but for a lot of the time, it was just one every now and then,” Herbold said. “We had a very long lull in the middle of the day where we didn’t catch anything.”

Cherry noted that they caught two good bass late in the day and ended up culling a smaller one.

“I think the sun got up and warmed those rocks,” he said. “The last one I caught was probably in about 3 inches of water. They were really shallow warming up.”

Cherry, who caught most of his fish on the Redeye Shad, said the key to a proper presentation was letting the bait hit bottom and then slow rolling it back. The bites, Herbold said, were convincing.

“You knew when they bit,” she said. “The fish would run straight at you, so you had to reel very fast to catch up.”