GILBERTSVILLE, Ky. (May 17, 2018) – Pro Randy Haynes of Ripley, Mississippi, weighed a 26-pound, 3-ounce, limit of bass Thursday to take the early lead at the FLW Tour at Kentucky Lake presented by Costa Sunglasses. Haynes’ limit – tied for the third largest single-day limit ever caught on Kentucky Lake in FLW Tour competition – will pace the field heading into Day Two of the four-day event that features the world’s most best bass-fishing professionals and co-anglers casting for top awards of up to $125,000 cash in the Pro Division and up to $25,000 cash in the Co-angler Division. 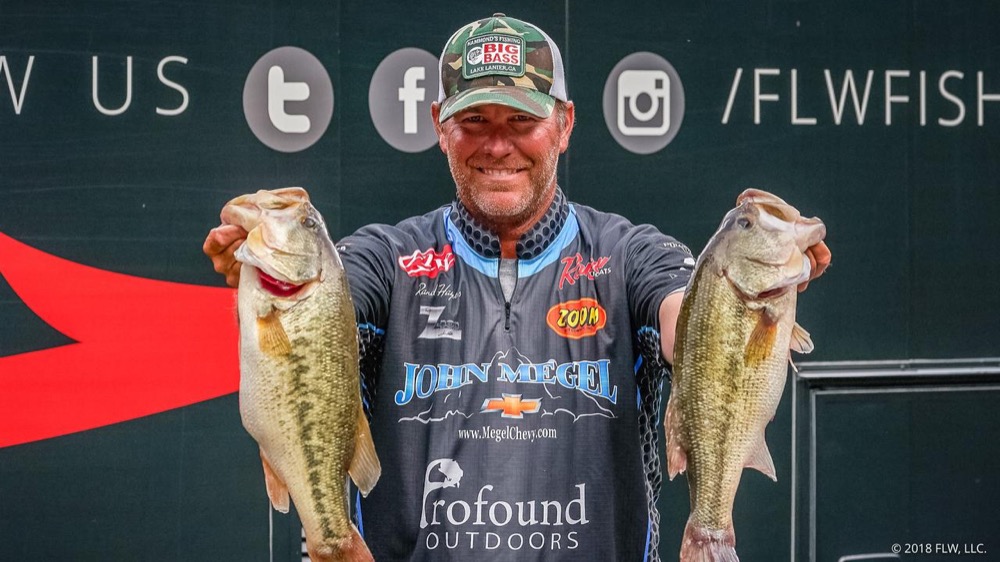 Right behind Haynes is second-place pro Jason Lambert of Michie, Tennessee, a fellow ledge-fishing expert who was the 2016 FLW Tour at Kentucky Lake Champion. With Haynes and Lambert both catching their fish out deep and separated by less than 2 pounds, the stage could be set for a potential offshore shootout.

“My first five holes were tough, but I hit a good one and stayed there most of the day. I caught a couple, left for a little while, came back and culled a couple more times,” said Haynes, who is seeking his second career win in FLW Tour competition. “It was pretty tough out there – I only had six keeper bites all day. I’m very fortunate to have what I did. It’s kind of wide open out there right now. I can fish anywhere I want to, and I like that.”

Haynes said he counted 10 bass in his primary location, six of which he put in the boat. He said it took most of the day to put together his limit.

“I just grinded it out and the bites I got were the right ones,” said Haynes. “The spot is burned to the ground now so I’m going to have to go out there and start over tomorrow. It’s all about finding them right now – finding the fresh ones. That’s the whole deal right now.”

The top 10 pros after day one on Kentucky Lake are:

Anthony Gagliardi of Prosperity, South Carolina, earned the $500 Simms Big Bass award in the Pro Division Thursday thanks to a 6-pound, 15-ounce bass.

The top 10 co-anglers after day one on Kentucky Lake are:

Christopher Kanute of Clover, South Carolina, earned $250 for the Simms Big Bass award in the Co-angler Division with a 6-pound, 1-ounce bass.

In FLW Tour competition, pros and co-anglers are randomly paired each day, with pros supplying the boat, controlling boat movement and competing against other pros. Co-anglers fish from the back deck against other co-anglers. The full field of anglers competes in the two-day opening round. Co-angler competition concludes following Friday’s weigh-in, while the top 30 pros based on their two-day accumulated weight advance to Saturday. Only the top 10 pros continue competition Sunday, with the winner determined by the heaviest accumulated weight from the four days of competition.

The total purse for the FLW Tour at Kentucky Lake presented by Costa Sunglasses is more than $930,000. The event is hosted by the Kentucky Lake Convention & Visitors Bureau.

Prior to the weigh-ins Saturday and Sunday, May 19-20, FLW will host a free Family Fishing Expo at Kentucky Dam State Park from noon to 4 p.m. The Expo is the perfect opportunity for fishing fans of all ages to meet their favorite anglers, enjoy interactive games, activities and giveaways provided by FLW sponsors, meet characters from the “Paw Patrol” children’s television show, and learn more about the sport of fishing and other outdoor activities.

Also for youth, the FLW Foundation’s Unified Fishing Derby will be held at Kentucky Dam State Park on Saturday, May 19, from 9-11 a.m. The event is hosted by FLW Foundation pro Cody Kelley along with other FLW Tour anglers, and is free and open to youth (18 and under) and Special Olympics athletes (all ages). Rods and reels are available for use, but youth are encouraged to bring their own if they own one. The 1st and 2nd place anglers that catch the biggest fish will be recognized Saturday on the FLW Tour stage, just prior to the pros weighing in.