Not only did fishing teams from 78 universities take their “A game” to Lake Tenkiller for the Carhartt Bassmaster College Series National Championship last week – the brutal mid-summer Oklahoma heat showcased its most intense game face too. 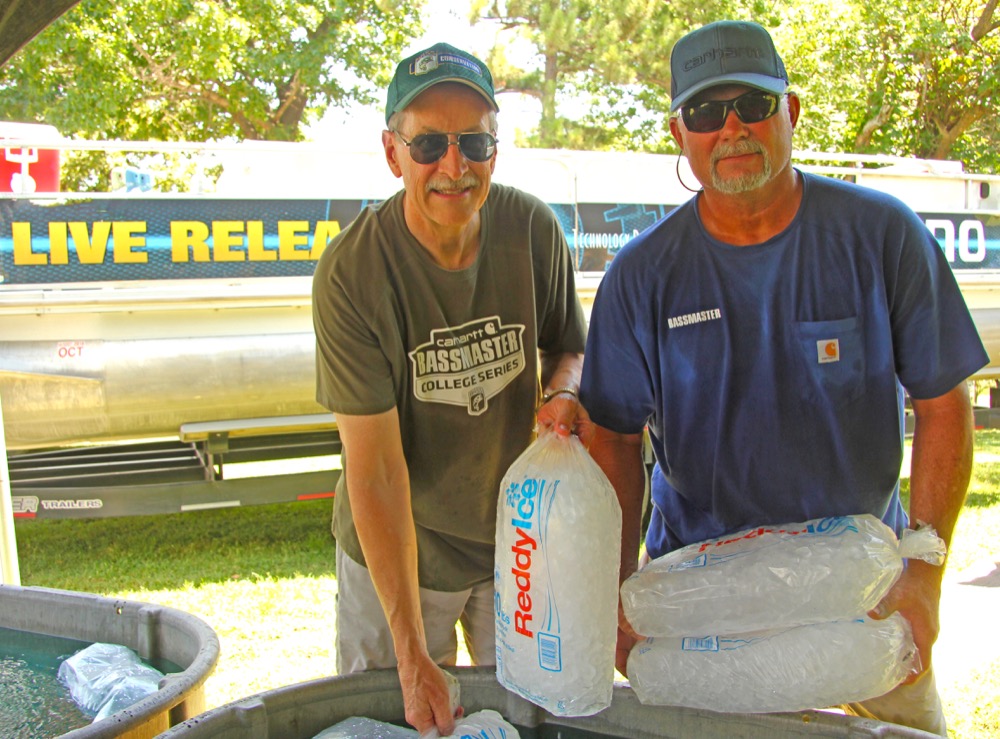 Air temps sweltered around 104, water temps were well over 90, oak trees were dropping leaves in heat distress, and the Carhartt t-shirts worn by B.A.S.S. Director of Conservation, Gene Gilliland and the tournament staff were working overtime to wick away sweat behind the weigh-in stage.

Hot lake water is Gilliland’s worst nightmare. Because as we all learned in junior high school, hot water holds less oxygen than cold, and without hard work and a lot of ice, that can lead to dead tournament bass – a gut wrenching thought to not only all of us who love the sport, but likewise for Gilliland, who is an avid angler, and takes the successful preservation of tournament caught bass very seriously.

“Our goal is to keep the water in each 150 gallon dip tank backstage five to seven degrees cooler than the lake water. So at Tenkiller, that meant we had to keep adding ice until the water was about 80 degrees, and we constantly monitored water temperature and add ice to maintain that range,” says Gilliland.

Not only do water temps need to be cooled in the dip tanks teams hold their bagged fish in as they make their way to the stage, but water must also be cooled in the B.A.S.S. Live Release pontoon boat tanks used to transport tournament caught bass back to the lake for release after they’ve been weighed in. And each pontoon boat can haul 600 pounds of bass at a time.

Certainly Gilliland’s success rate in the preservation of bass during and after weigh-in increases if anglers work hard to take care of their catch throughout the tournament day, and that begins with proper livewell maintenance. He offers these six steps all of us can follow to be better caretakers of our summertime catch.

Spend five or ten bucks for a swimming pool thermometer you can keep in your livewell in order to know if you’re maintaining a temp of five to seven degrees less than the lake temp. (Note: Keeping your water too cold is nearly as dangerous as letting it get too hot.)

(1) Fill up your livewells really early in the morning on “fill” or “fresh” mode.

(2) Switch quickly to “recirculate” mode, and begin adding ice until the temp is five to seven degrees less than the lake temp. Expect to add ice throughout the day to maintain the cooler temp.

(3) Be sure to run aerators on “manual” or full time rather than on a timer to help maximize oxygen replacement.

(4) Then, twice a day, flush out half the water in your livewells that’s sure to be contaminated by ammonia excreted from the bass swimming in your livewell water – and refill with fresh lake water.

(5) Finally, have plenty of extra ice onboard. Frozen plastic bottles full of ice floating inside your livewells can be a much more efficient than adding cubed ice.

Follow these steps, and you can proudly count on more than 95% of your bass being released alive after weigh-in, just like Gilliland and all the hard working folks on the B.A.S.S. tournament staff.

“We always donate the very few bass that don’t survive to local charity,” says Gilliland. “But lots of ice, the constant monitoring of holding tank temps, and hard work are the biggest keys to our success rate.”