GAINESVILLE, Ga. (March 11, 2018) – After weighing in a limit of spotted bass in each of the first three days of competition, pro Bradley Hallman of Norman, Oklahoma, weighed a five-bass limit of largemouth Sunday totaling 13 pounds, 1 ounce, to clinch his victory at the FLW Tour at Lake Lanier presented by Ranger Boats and win $100,000. Hallman led the event for four-straight days after weighing in a tournament-best 23-pound, 11-ounce limit of spotted bass Thursday on Day One, and won by a 2-pound, 10-ounce margin over fellow Oklahoman Zack Birge who finished with 65-10. 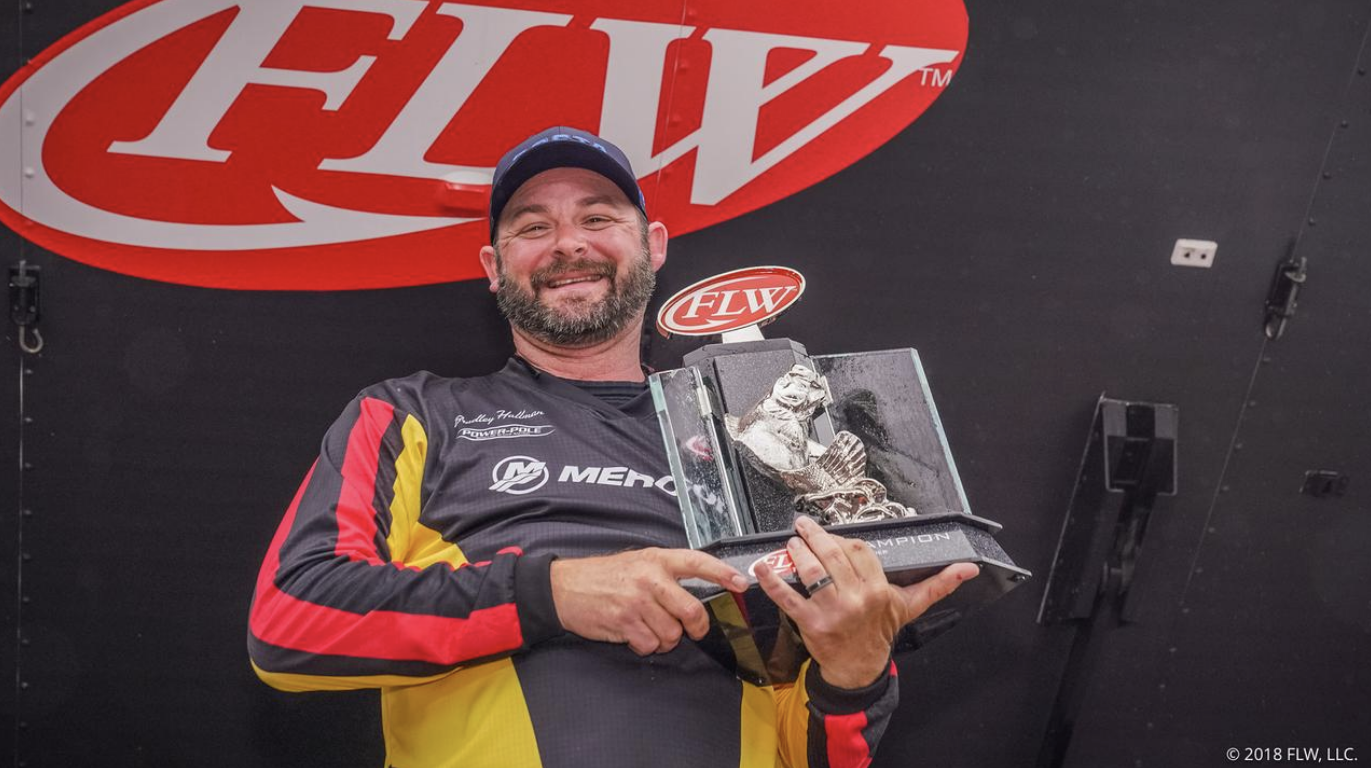 “It was a great, great week,” said Hallman, who earned his second career win on the FLW Tour. “I probably fished the best week that I have ever fished in my entire life. I say that because I had to catch these fish a different way each day.”

Hallman said that he caught his huge Day One limit of spotted bass fishing points with a Sexy Shiner-colored Megabass Vision 110+1 jerkbait and a sexy shad-colored Keitech 3.8-inch swimbait with a ½-ounce Buckeye Lures J-Will Swimbait Head. On Day Two, Hallman fished the points but only managed one keeper by 1 o’clock. He changed patterns and began targeting seawalls in marinas with the swimbait and managed to bring 18-7 to the scale.

Day Three, Hallman only caught one fish with the swimbait off of the seawalls, and no fish off of the points. He was forced to change patterns again, this time catching a limit inside marinas, under shallow docks and walkways, with a green-pumpkin Zoom Trick Worm on a ¼-ounce shaky-head rig.

“This morning I knew that I needed the sun to position those fish on the docks, and with the cloud cover I wasn’t going to have it,” Hallman said. “I had stopped a couple of times and fished the river near takeoff in my last 10 minutes before checking in each day and caught a couple with a spinnerbait. So, I made the decision this morning to fish the river all day.”

Hallman never caught a fish more than three miles from takeoff Sunday, hitting docks and patches of emergent dogfennel in the backs of pockets. He said that his key bait was a ½-ounce, double willow-bladed, chartreuse and white War Eagle spinnerbait.

“I’m really blessed and fortunate to win one Tour event, let alone two,” Hallman went on to say. “I’m real good at finishing 135th too, so I take the good with the bad and I’m just trying to enjoy this one for all I can.”

Complete results for the entire field can be found at FLWFishing.com.

Overall there were 49 bass weighing 148 pounds, 9 ounces caught by pros Sunday. Nine of the final 10 pros weighed in five-bass limits.

Television coverage of the FLW Tour at Lake Lanier presented by Ranger Boats will premiere in high-definition (HD) on NBC Sports Network (NBCSN) April 18 from Noon-1 p.m. EST. The Emmy-nominated “FLW” television show airs on NBCSN, the Pursuit Channel and the World Fishing Network and is broadcast to more than 564 million households worldwide.

The total purse for the FLW Tour at Lake Lanier presented by Ranger Boats was more than $930,000, including $10,000 through 60th place in the Pro division. The tournament was hosted by the Gainesville Convention and Visitors Bureau. The next event for FLW Tour anglers will be the FLW Tour at Lake Cumberland presented by General Tire, April 12-15 in Somerset, Kentucky, hosted by the Somerset Tourist and Convention Commission.

In FLW Tour competition, pros and co-anglers are randomly paired each day, with pros supplying the boat, controlling boat movement and competing against other pros. Co-anglers fish from the back deck against other co-anglers. The full field of 368 anglers competed in the two-day opening round. Co-angler competition concluded following Friday’s weigh-in, while the top 30 pros based on their two-day accumulated weight advanced to Saturday. Only the top 10 pros continued competition Sunday, with the winner determined by the heaviest accumulated weight from the four days of competition.