BIRMINGHAM, Ala. — Jerry McKinnis, former B.A.S.S. co-owner, founder of JM Associates, and a legend in the fishing industry, passed away early Sunday morning. The 82-year-old McKinnis had been in the hospital for six weeks, dealing with an injury and infection sustained on a fishing trip in Wyoming. 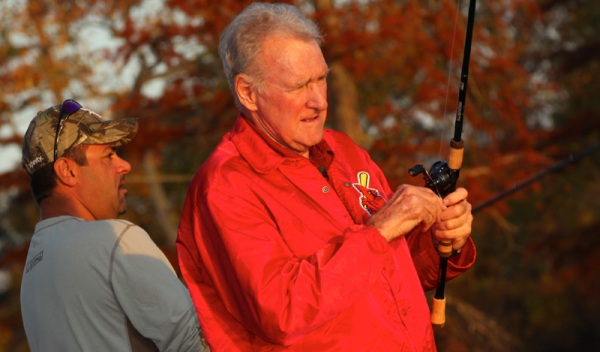 McKinnis, along with Don Logan and Jim Copeland, purchased B.A.S.S. from ESPN in 2010, and then sold controlling interest in the organization to Anderson Media in 2017. He was the leader of JM Associates, producing award-winning television and Internet shows about fishing and the outdoors. McKinnis was also the beloved host of the television series The Fishin’ Hole, which ran on ESPN for 44 years.

“Jerry was a true friend of the angler,” said Bruce Akin, CEO of B.A.S.S. “He contributed so much to the sport of fishing, extending all the way from his days on The Fishin’ Hole through his ownership of B.A.S.S.”

McKinnis and his partners hired Akin to lead the 500,000-member fishing organization shortly after they acquired it.

“Jerry was one of the most passionate people I’ve ever known as it relates to the world of bass fishing,” said Logan. “I don’t think I ever met anyone who spent more time than Jerry did thinking about how to make B.A.S.S. and bass fishing better — better for the anglers, better for the fans and members, and better for the sponsors.

“We came from very different backgrounds and totally different perspectives, but we always were able to reach common ground on any issue or problem we faced. He was not only a business partner, but he was also a true friend.”

A pioneer in outdoors television, McKinnis and his JM Associates production team took over production of the long-running television program The Bassmasters for B.A.S.S. and ESPN in 2001. Prior to that he helped create the FLW Tour and ESPN’s Great Outdoor Games, and he later developed the Redfish Cup and the Madfin Shark Series.

Bassmaster.com will have addition information on funeral arrangements in the coming days.

About B.A.S.S.
B.A.S.S. is the worldwide authority on bass fishing and keeper of the culture of the sport, providing cutting edge content on bass fishing whenever, wherever and however bass fishing fans want to use it. Headquartered in Birmingham, Ala., the 510,000-member organization’s fully integrated media platforms include the industry’s leading magazines (Bassmaster and B.A.S.S. Times), website (Bassmaster.com), television show (The Bassmasters on ESPN2 and The Pursuit Channel), radio show (Bassmaster Radio), social media programs and events. For more than 50 years, B.A.S.S. has been dedicated to access, conservation and youth fishing.