Scorched fields lined the highway to the lake, as the sounds of Sturgill Simpson bounced between the walls of the Tundra’s cab with boat in tow.

The smell of smoke still lingered in the sunrise air from prairie fires. Some of them intentional burns set by ranchers. Others accidental. In either case, a unique sign of early spring on the Southern Plains.

But amid the blackened acreage came a fishing tip. Beautiful pink-colored Redbud trees in blossom, signal not only new growth in the wake of fire, but also the perfect time of year to tie on a spinnerbait with a fluorescent red front ‘kicker’ blade.

No Longer a Secret 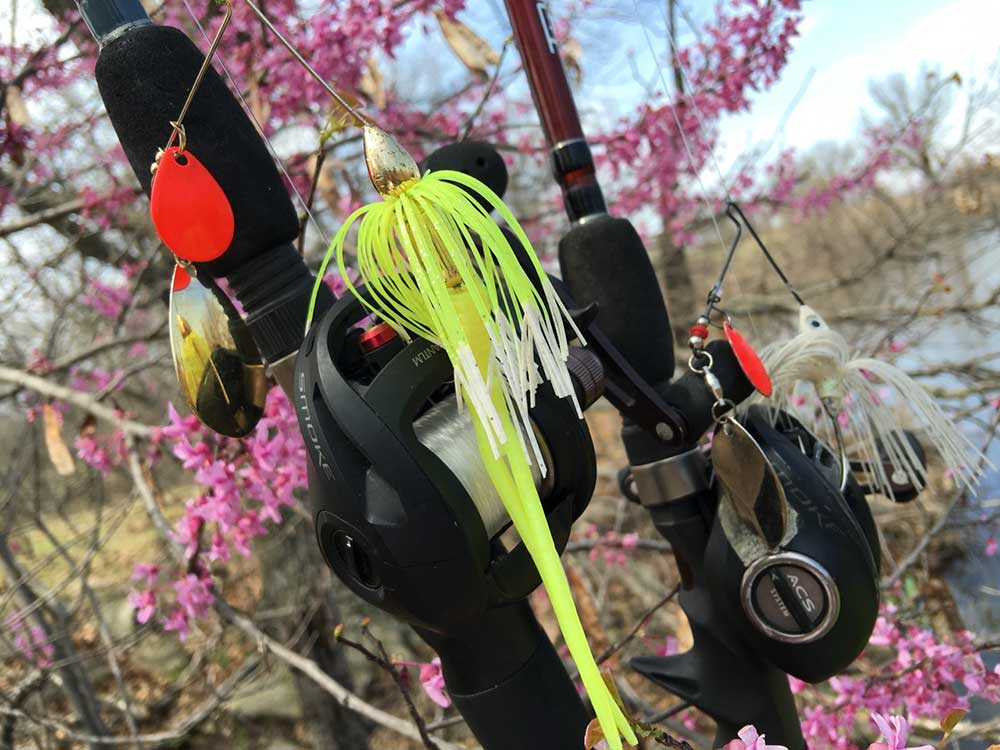 “The red/orange front blade was pretty much a secret around Oklahoma and Arkansas in the early 1990s when I started throwing it at Grand Lake,” says top regional spinnerbait assaultant Ron Shaw of Moore, Oklahoma.

Shaw shared the secret with his mentor, Ken Cook, and soon the 1991 Bassmaster Classic Champion made it a major part of the offerings from his sponsor Hart Tackle Company.

“Ken always said it was an all or nothing lure; either they’d hardly hit the red/orange kicker blade, or you’d wear ‘em out on it. I agree with him, but when the water temps are in the low 50s, I lean on it hard. It’s always a go-to bait for me in stained to dirty water in early spring,” says Shaw, a retired firefighter, who has qualified for numerous BFL Regional tournaments.

Honestly, there’s no proven theory on why the uniquely colored front blade seems to get more bites in the stained to dirty waters of early spring.

But top pro Mike McClelland who has eight B.A.S.S. wins to his credit offers a qualified opinion.

“I feel like in off colored water, the fluorescent red blade gives the fish a target to eat once they feel the vibration of the bait,” says McClelland.

“There’s been a lot of talk over the years about bass eating red crawfish in the springtime, and hence the reason they eat red-colored lures — but I don’t buy that theory,” says Gilliland. “The water is way too cold for an abundance of crawfish to be active. I think red works well in dingy water, simply because it’s more visible than standard blade colors like nickel or gold.” 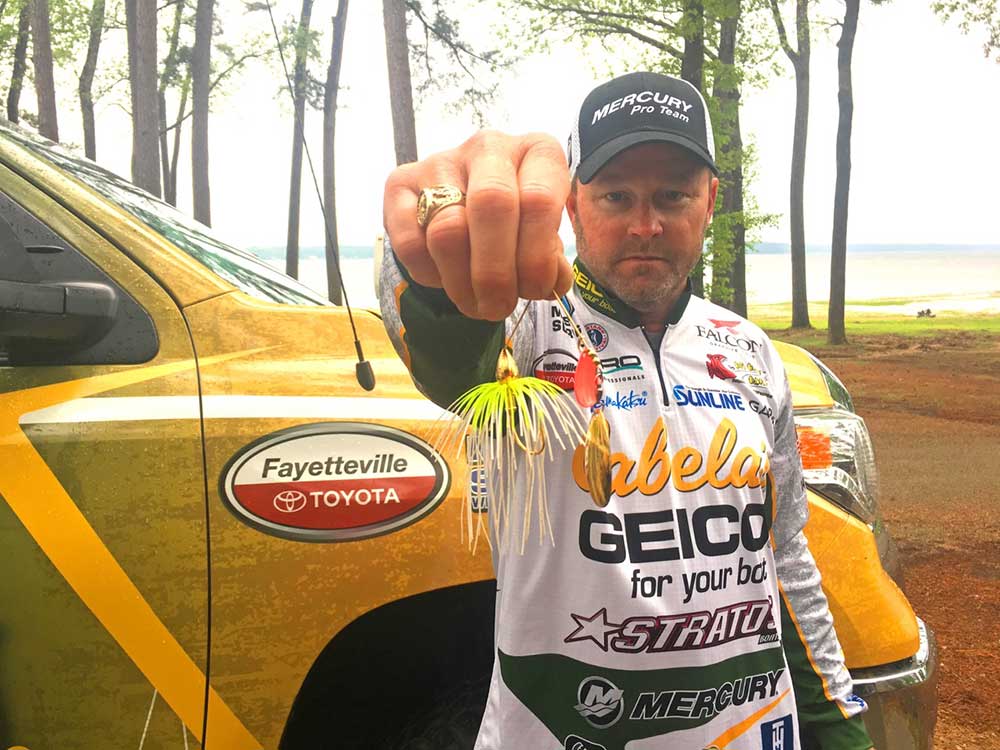 McClelland Knows It Works Nationwide
As a native of the very region where the red kicker blade was popularized, you might think this spinnerbait trick is only fashionable for anglers in a three or four state region surrounding The Ozarks, but the trustworthy pro knows better.

“It’s definitely most popular in Oklahoma, Arkansas and Missouri, but I’ll promise you it works anytime you have stained to dirty water in the early part of spring,” confirms McClelland.

Not Easy to Find

No longer a secret, and popular among many pros, you would think this blade offering would be easier to buy at retail, but it’s not.

Hart Tackle Company was originally Oklahoma-based, and by all accounts deserves credit for being the first to build a spinnerbait with the fluorescent red blade. Hart now calls Arkansas home, and their website still shows the red kicker blade to be available.

War Eagle, a popular brand among top pros, builds perhaps the most readily available bait with a fluorescent red blade, thanks largely to McClelland realizing its fish catching merits.

What About the Other Blade?

While many anglers agree on the goodness of the uniquely colored front blade, you might ask what rear blade best compliments it.

Truly, this is comes down to personal preference and confidence, but a gold Indiana is tough to beat.

However, as the prairie fire smoke lingered and the redbuds bloomed, my fishing buddy Beau caught just as many from the back deck of my boat with a gold willow behind his red kicker, as I did with the Indiana.

If the water is slightly cleaner but still cold, I’ll put a nickel Oklahoma blade once made by Terminator, behind my red kicker.

I learned this one the hard way. With the popularity of high-speed reels now being offered in the 7.0:1 to 9.0:1 range, it’s easy to reach for one of those burners to speed your favorite spinnerbait along.

Don’t do that. Take your time. Water temps are still in the high 40s to upper 50s – and I once got my butt kicked by a comrade on the back deck of my boat because he matched his spinnerbait to a much slower geared reel than me.

I love a Quantum Smoke with a 6.1:1 gear ratio for early spring spinnerbaiting. It gives me plenty of winching power to get fish from the woody or weedy habitat where I’m typically fishing a spinnerbait – and mostly, it forces me to move the lure a little slower in the cold dingy waters of early spring. 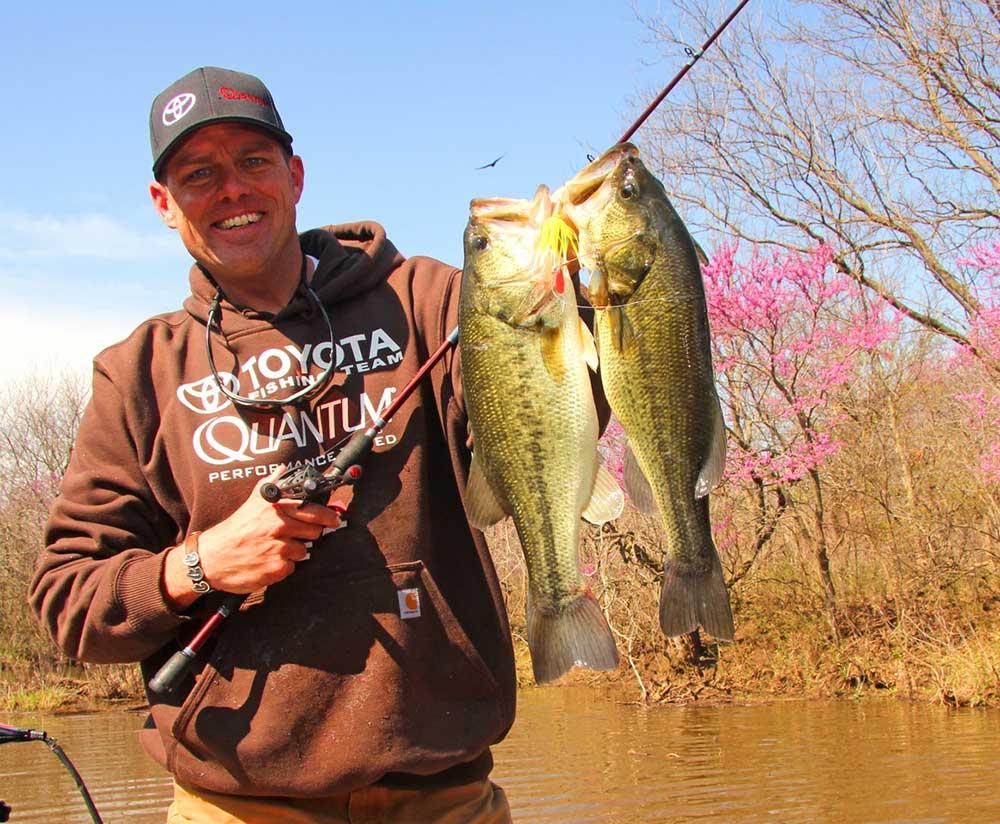 In conclusion, as sure as redbud trees bloom despite wildfires, and Sturgill Simpson pens lyrics far deeper than the waters where a spinnerbait shines best — when early spring’s waters are dingy and cool, there are very few lures that will outshine a spinnerbait featuring this uniquely colored kicker blade.