CLEWISTON, Fla. (Jan. 28, 2018) – When Leesburg, Florida, angler Tim Frederick turned pro and began competing on the Fishing League Worldwide (FLW) Tour, the first event of his career was at Lake Okeechobee in February of 2016. Frederick managed to catch just one bass in two days of competition at that tournament and finished in 169th – last place. On Sunday, Frederick redeemed himself by catching a five-bass limit weighing 19 pounds, 14 ounces, to earn the win the FLW Tour at Lake Okeechobee presented by Evinrude. 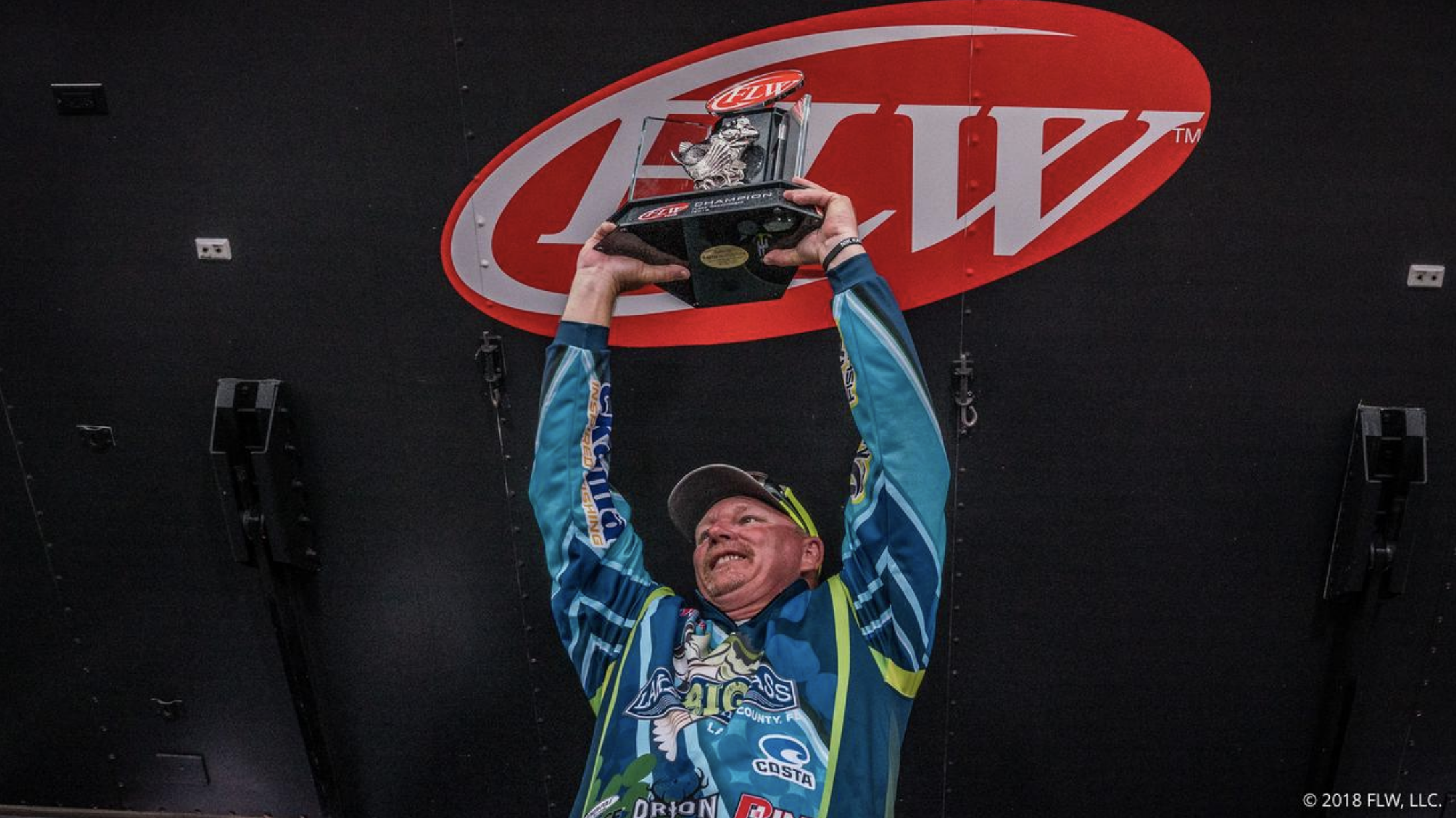 Frederick’s four-day total of 20 bass weighing 85-4 gave him the win by a narrow 1-pound, 2-ounce margin over second-place pro Bryan Schmitt of Deale, Maryland, and earned him $100,000 in a dramatic finale to the four-day event that featured 188 of the best bass anglers in the world kicking off the 2018 FLW Tour season.

“I’m still a little shocked,” said Frederick, whose previous best finish in FLW Tour competition was a 14th place finish on the Harris Chain of Lakes in 2017. “I didn’t think that I had as much weight that I did today. Some of the best fisherman on the planet were fishing in this event and to come out on top after four days – this is a dream come true.”

Frederick caught his bass throughout the week by targeting isolated reed clumps in Harney Pond.

“I was so stressed today,” Frederick said. “I had a small limit and I had missed a good one earlier and I did not know whether to leave or to stay. I had to sit down for a minute and regain my composure and I decided to stick it out in that area. I had nothing else to go to, and that place had been special to me. With just 10 minutes left in the day, I caught a big one. It was a $100,000 fish.”

“I think the keys for me this week were my Power-Poles, my Florida knowledge, and patience,” Frederick went on to say. “It would have been near impossible for me to fish some of the areas that I did this week if I wouldn’t have been able to pole down. And when I would first pull up to a spot I would target the key areas. Sometimes it took multiple casts and fishing extremely slow, but every fish that I caught were in those key areas.”

Compete results for the entire field can be found at FLWFishing.com.

Overall there were 50 bass weighing 157 pounds, 13 ounces caught by pros Sunday. All of the final 10 pros weighed in five-bass limits.

Jeffrey Mathews of Maitland, Florida, won the co-angler division and $20,000 Friday with a two-day total of 10 bass weighing 42 pounds, 1 ounce, followed by Tyler Woolcott of Port Orange, Florida, who finished in second place with 10 bass weighing 37 pounds, 15 ounces, worth $7,600.

The total purse for the FLW Tour at Lake Okeechobee presented by Evinrude was more than $930,000, including $10,000 through 60th place in the Pro division. The tournament was hosted by Roland & Mary Ann Martin’s Marina and Resort and the Hendry County Tourism Development Council. The next event for FLW Tour anglers will be the FLW Tour at the Harris Chain of Lakes, Feb. 22-25 in Leesburg, Florida, hosted by Lake County, Florida.

Television coverage of the FLW Tour at Lake Okeechobee presented by Evinrude will premiere in high-definition (HD) on NBC Sports Network (NBCSN) March 28 from Noon-1 p.m. EST. The Emmy-nominated “FLW” television show airs on NBCSN, the Pursuit Channel and the World Fishing Network and is broadcast to more than 564 million households worldwide.

In FLW Tour competition, pros and co-anglers are randomly paired each day, with pros supplying the boat, controlling boat movement and competing against other pros. Co-anglers fish from the back deck against other co-anglers. The full field of 376 anglers competed in the two-day opening round. Co-angler competition concluded following Friday’s weigh-in, while the top 30 pros based on their two-day accumulated weight advanced to Saturday. Only the top 10 pros continued competition Sunday, with the winner determined by the heaviest accumulated weight from the four days of competition.