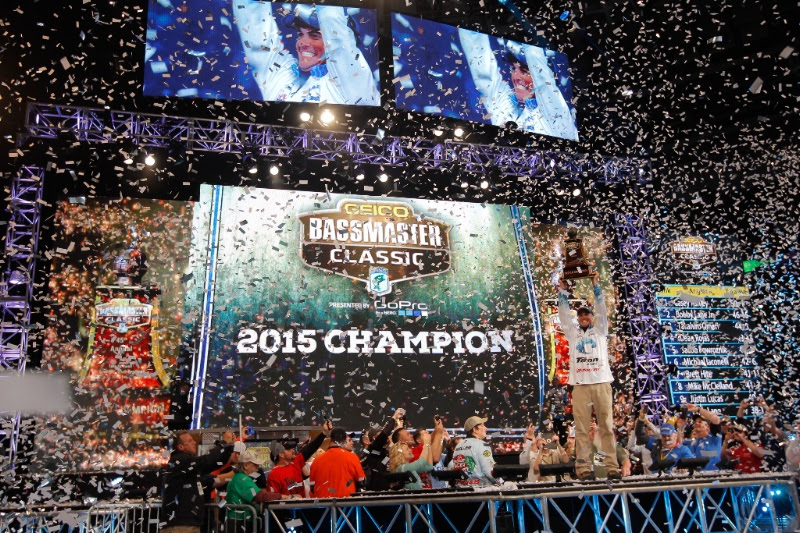 GREENVILLE/ANDERSON, S.C. — A star-studded field of 51 bass anglers has qualified to compete for more than $1 million in the 2018 GEICO Bassmaster Classic presented by DICK’S Sporting Goods. Only one spot remains to be filled in the world championship of bass fishing. It will go to the individual winner of the Toyota Bonus Bucks Bassmaster Team Championship, to be held in December.

Long known as the Super Bowl of Bass Fishing, the Classic will take place — for the third time — on Lake Hartwell at Anderson, S.C., March 16-18. Morning takeoffs will be from the modern Green Pond Landing and Event Center in Anderson, and weigh-ins and the popular Bassmaster Classic Outdoors Expo presented by DICK’S Sporting Goods will be held in Greenville on those dates.

Among the 13 former Classic champions competing for the $300,000 first prize are two who have won on Hartwell: Casey Ashley of Donalds, S.C., the winner in 2015, and Alton Jones of Lorena, Texas, the 2008 champion. Also aiming for bass fishing’s biggest prize are defending champion Jordan Lee of Guntersville, Ala., and four-time Classic winner Kevin VanDam of Kalamazoo, Mich.

A dozen rookies hope to achieve a rare feat by winning the Classic on their first try. No angler has done so since Boyd Duckett captured the trophy in 2007.

Among the first-timers are the Top 3 finishers in last week’s Academy Sports + Outdoors B.A.S.S. Nation Championship presented by Magellan Outdoors, which also was held on Lake Hartwell. They are Caleb Sumrall of New Iberia, La., the newly crowned B.A.S.S. Nation champion; Marty Giddens of Eclectic, Ala.; and Luke Gritter of Otsego, Mich., who competed in the Elite Series in 2009.

In addition, 19-year-old college freshman Jacob Foutz of Charleston, Tenn., qualified through the Carhartt Bassmaster College Series. And four more-seasoned competitors earned invitations by winning a Bass Pro Shops Bassmaster Opens tournament: John Cox of DeBary, Fla.; Rick Morris of Lake Gaston, Va.; Carl Svebek of Orange, Texas; and Stanley Sypeck Jr. of Sugarloaf, Pa. Morris was an Elite Series angler from 2006 to 2014, and Svebek competed on the Bassmaster Top 100 circuit, a predecessor to the Elite Series, in 1996 and 1997.

Three current Elite Series anglers also earned bids to the Classic by winning Opens this year. They are Mike McClelland of Bella Vista, Ark.; James Elam of Tulsa, Okla.; and Jesse Wiggins of Cullman, Ala., and they are among 43 Elite anglers who will be competing in the 2018 Classic. They know that simply qualifying for the Classic solidifies a professional angler’s career. Winning often is worth more than $1 million in endorsements, bonuses and public appearance fees.

Alabama, the adopted home of numerous touring pros, accounts for 11 of the Classic qualifiers to date. Tennessee will send six to the event and Texas, four.

The 2015 Greenville Classic drew an attendance of more than 103,000 over the three-day event. Weigh-ins will be held each competition day in the Bon Secours Wellness Center arena in downtown Greenville. The Classic Expo, featuring the newest boats, motors, electronics, tackle and lures, will spread across 260,000 square feet in the TD Convention Center. The Expo rivals the annual American Sportfishing Association ICAST trade show in attention focused on new fishing gear, and numerous manufacturers use the venue to introduce new products for the coming fishing season.

At full pool, Lake Hartwell comprises nearly 56,000 acres and offers anglers 962 miles of shoreline in their search for the heaviest five-bass daily limits. The 2018 Classic is almost four weeks later in the year than the 2015 event, which was the coldest Classic on record. The air temperature for the opening round that year was 9 degrees, and the takeoff was delayed briefly as crews struggled to free boats that were frozen to trailer bunks.

Still, Ashley was able to string together three daily limits totaling 50 pounds, 1 ounce. He’s a favorite to repeat as champion, but another South Carolina pro, Jason Williamson of Wagener, has a home-state advantage as well. Until recently, anglers competing on their home waters were considered jinxed, but three of the four most recent winners, including Ashley, Randy Howell of Alabama in 2014 and 2016 champion Edwin Evers of Oklahoma, overcame those odds. Alabama’s Lee broke the string with a record-setting come-from-behind victory on Lake Conroe, Texas, this year.

Catches should be heavier than in previous Hartwell Classics but aren’t likely to exceed the Classic record of 69-11 set by VanDam in the Louisiana Delta out of New Orleans in 2011. Hartwell is ranked 21st in the Southeast Division of Bassmaster Magazine’s 100 Best Bass Lakes list for 2017.

Hartwell, a U.S. Army Corps of Engineers impoundment of the Savannah, Tugaloo and Seneca rivers, is shared by South Carolina and Georgia. The two previous Classics there were won in offshore locations, but the mid-March timing of the 2018 event should play into the strategies of shallow-water experts.

The Classic will be hosted by VisitGreenvilleSC and Visit Anderson.

The final qualifier for the 48th Classic will be named Dec. 9, following the Bassmaster Team Championship, which includes the top two-angler teams from 54 sanctioned team trails across the country. More than 200 teams are expected to battle for the national team title Dec. 6-7 on Norfork Lake in Mountain Home, Ark. The next two days, members of the Top 3 teams will fish solo with the individual winner earning an invitation to the Classic.