Jesse Wiggins of Cullman, Ala., takes the lead on the second day of the 2017 Bass Pro Shops Bassmaster Southern Open No. 3 held on Smith Lake out of Jasper, Ala., with a two-day total weight of 26 pounds, 7 ounces. 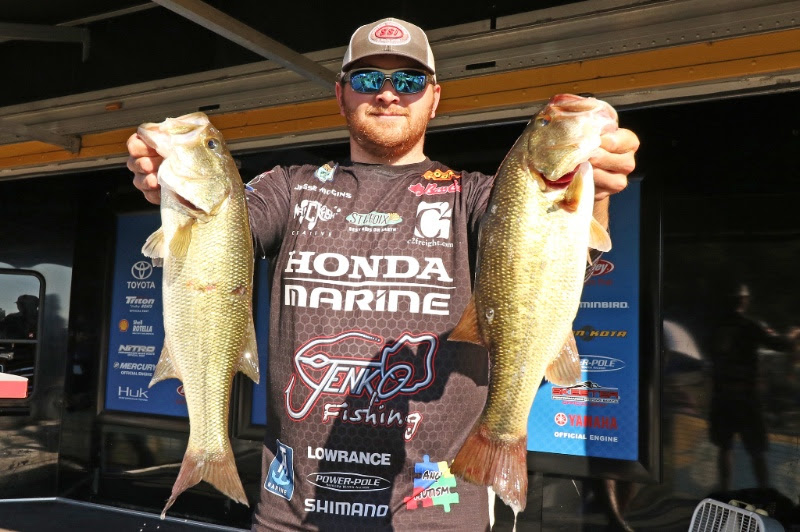 That’s what Jesse Wiggins told the crowd Friday during the second round of competition at the final Bass Pro Shops Bassmaster Southern Open on Smith Lake.

Now the 27-year-old pro of Cullman, Ala., needs to finish strong to win yet another Opens tournament — and this one is on his home lake, to boot.

Wiggins, who just finished his rookie season on the Bassmaster Elite Series, jumped to the top of the leaderboard Friday with a five-bass limit that weighed 11 pounds, 5 ounces. His two-day total of 26-7 gave him almost a 2 1/2-pound lead over Rick Morris, who is second among the 12 anglers who survived the cut to fish Saturday.

The winner of the tournament will clinch a berth in the 2018 GEICO Bassmaster Classic presented by DICK’S Sporting Goods, but Wiggins has already secured a spot in next year’s “Super Bowl of professional bass fishing.” He won the first Southern Open of the season on Florida’s Harris Chain of Lakes, which he admitted took the pressure off him this week.

“It really did make things easier for me,” said Wiggins. “I’ve already qualified for the Classic, but I’m greedy. I always want to win, especially if there’s money on the line.”

And there is. Not only will the Southern Open winner earn a generous cash prize, but there’s also a Skeeter boat/Yamaha motor package up for grabs. The grand total in cash and prizes is valued at more than $50,000.

“Hopefully I’m in position to win,” Wiggins said. “It’s going to be close, but I’ve got a chance.”

While some other leading anglers are fishing suspended bass offshore, Wiggins said he’s fishing structure along shorelines. He said he’s labored for every catch he’s had, as unseasonably warm temperatures have made getting bites difficult.

Wiggins said he had only four bass with an hour left to fish, but he changed locations and hooked two keepers in the final minutes of Friday’s competition. He likely would have survived the Top 12 cut without those catches, but the extra weight propelled him into the top spot.

Wiggins is used to winning on Smith. He’s been a force in local tournaments here for years, and he proved his mettle against other pros last year when he won a Southern Open on the lake to qualify for the 2017 Bassmaster Classic. His knowledge here, despite his youth, is practically unprecedented.

“We had a cool snap in August and the water temperature dropped about five degrees then,” Wiggins said. “They started biting, but then it warmed up again and they stopped. But I tell people the main reason they stop biting on Smith Lake is because of all of this boat pressure. That’s why I fish for fish that people can’t buzz over.”

When the tournament wraps Saturday, the Top 5 anglers in the Southern Open points standings will earn invitations to compete in next year’s Bassmaster Elite Series.

On the co-angler side, Todd Lee of Jasper takes the lead with a two-day total of 13-4.

The event will conclude Saturday with a 6:30 a.m. takeoff at Smith Lake Dam Access . The final weigh-in will take place at the Bass Pro Shops location in Leeds, Ala., beginning at 3:45 p.m.

The tournament is being hosted by the Walker County Chamber of Commerce.