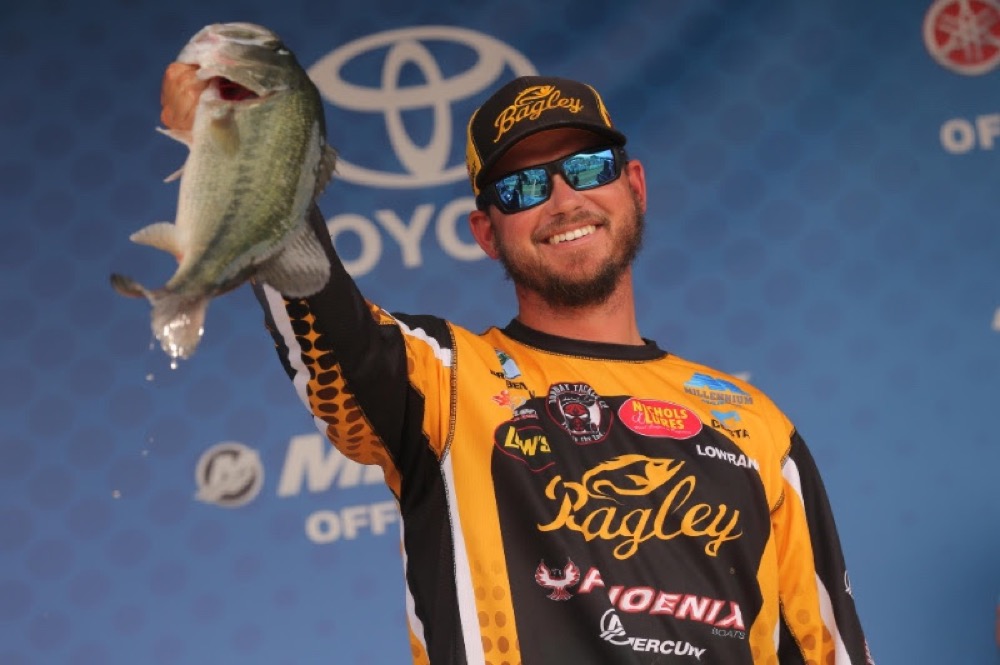 The third-year pro finished in fourth place at his first tournament as a Bassmaster Elite Series contender; today he bested the Top 108 bass anglers in world with a four-day weight of 67-15.

After a minor rule infraction, he had to endure a 15-minute delay at take off, which he feared would impact his morning bite.

“It was a stupid mistake on my part,” he said. “But over the past couple of days, I was catching my best fish during the first 15 to 20 minutes of the morning in a marina up Lake Travis. I was sharing water with Marty Robinson, and he graciously agreed to let me have that area to myself, even after I sat in the penalty box for 15 minutes. That was huge, and I’m grateful he worked with me.”

Benton was sure to acknowledge Robinson’s generosity and sacrifice, although he later found out that due to the cloudy, rainy weather the action in his marina had faded.

“I’m confident the weather this morning really suppressed the shad activity that had the bass feeding so heavily during the previous mornings,” he said. “The weather also kept the pleasure boaters off the water, which allowed me to fish some areas that were otherwise unfishable.”

The 30-year-old angler had two different patterns going: One in the morning and one in the afternoon.

“I found some fish during practice that helped me throughout this tournament,” he said. “But I really didn’t put it together until later in the day on Day 1. I was using a walking topwater presentation that was working well throughout the day, even in the hot sun and clear skies. I decided to give it an hour during the first day, and it paid off.”

His topwater lure of choice was a Bagley Knocker B rigged with Owner No. 2 trebles that caught bass around docks in marinas, over schooling bass, near bushes and along rocky shorelines that were protected from the wind and boat-traffic wake.

“I’ve been close to winning one of these before,” he said. “And I know it’s been said before, but everything has to go right to be the last man standing at a Bassmaster Elite Series tournament. If it’s meant to be, and it’s your time it’s going to happen.

“This is a dream come true, and I can’t tell you how grateful I am to win this thing,” Benton said. “Things were going my way early on, and I felt that momentum swing my way. I knew that I had to be smart with every cast. This was an awesome win for me and my family.”

Jacob Wheeler of Harrison, Tenn., caught 16-2 pushing his four-day total to 64-8, which was good enough for second place and valuable Toyota Bassmaster Angler of the Year points.

“I spent most of my time up the Colorado River fishing water that was dirtier than the rest of the lake,” he said. “Most of my fish came on a 7/8-ounce silver jigging spoon that mimicked the plentiful shad in the lake. I also caught a few bass on a custom topwater prop bait when they were on the surface chasing bait.”

Cliff Pace of Petal, Miss., caught a 10-5 largemouth bass on the first morning of the event. That fish held up as the tournament’s biggest bass, and earned Pace a brand new Toyota Tundra pickup valued at $50,000.

That big bass helped Pace finish in third place, which is a position he held down all four days of the event.

“That was the very first fish I caught during the first morning of the tournament,” Pace said. “I caught that bass from 27 feet of water on a Carolina rig with a V&M Drop Shad in green pumpkin.”

This tournament was held under a unique format where the fish were immediately weighed, recorded and released. However, each pro could bring one bass back to weigh-in if it measured over 18 inches. A $1 million purse was paid out to the entire field.

Brent Chapman of Lake Quivira, Kan., was awarded $1,000 for the leading the Toyota Bassmaster Angler of the Year points race at the end of the event.

Gerald Spohrer of Gonzales, La.,​ earned the Power-Pole Captain’s Cash Award of $1,000 for being the highest-placing angler who is registered and eligible and uses a client-approved product on his boat.