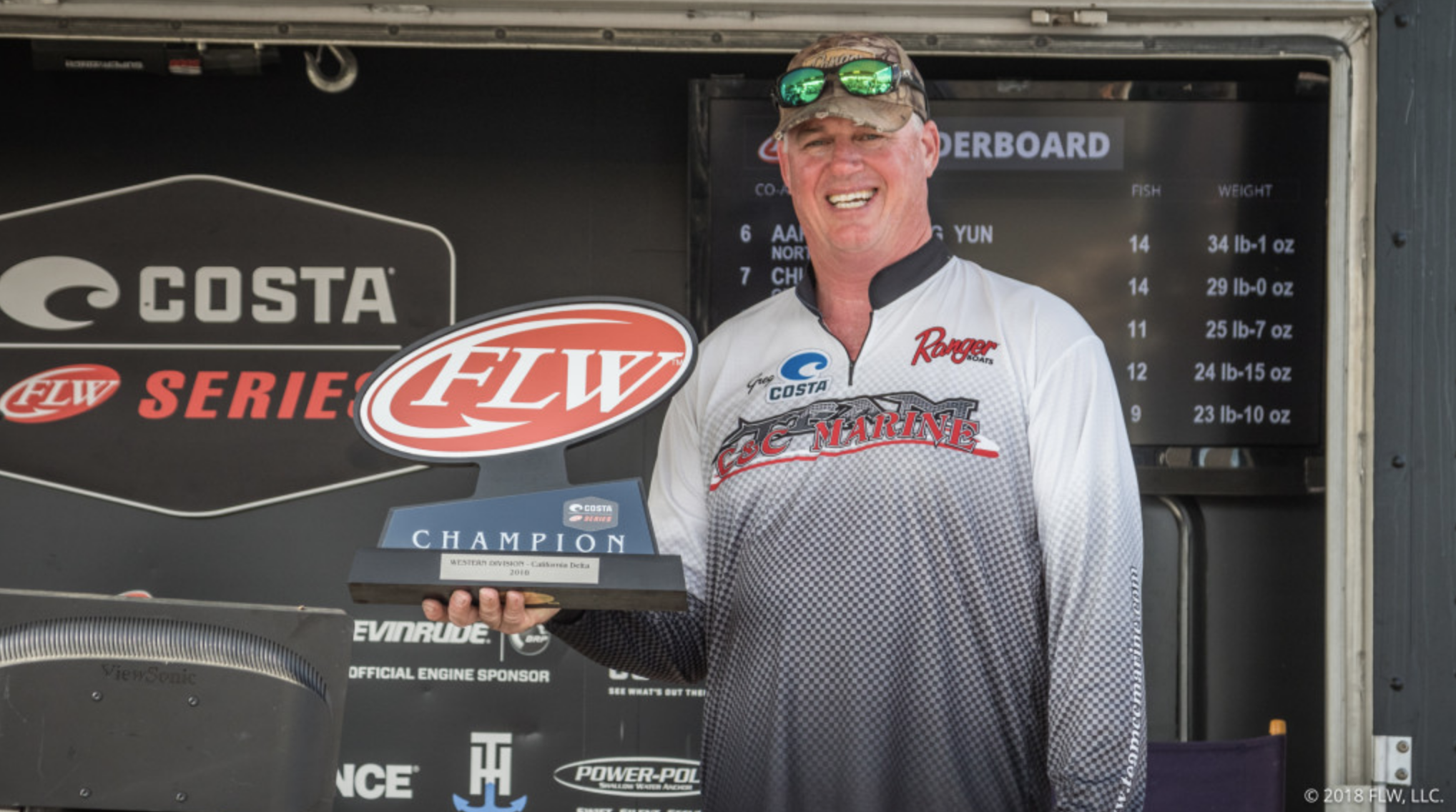 “I’ve worked really, really hard to get to this point. This [win] has been 30 years of work [in the making],” said Troughton, who earned his first career win in FLW Series competition. “I focused on this event, put in tons of time and effort and made it happen. It’s been an incredible week.”

Troughton said he started out Thursday expecting to put together a decent limit with a Don Iovino’s bass pattern-colored Splash-It Popper, but as conditions changed, so did his approach.

“My son Carter and I pre-fished together, and I did well with the Splash-It in the morning. I thought I could get limits fairly quickly for about 12 or 13 pounds, but things changed, as they always do in these tournaments,” said Troughton. “On Thursday, I didn’t have any bites for an hour and a half. My co-angler caught a few on a drop-shot and I felt things were changing, so I decided to get to the punching water and go to work.”

Troughton said he primarily worked through grass mats near three flooded islands in the central region of the Delta, adding that he fished slowly in 6 to 8 feet of water.

“I had confidence in the secondary deal. Within five minutes Thursday, I had my first bite – a 4-pounder,” said Troughton. “I made a little move to another small grass mat and stuck a 3-pound, 8-ouncer. I rotated amongst several small mats, focusing on key parts of them. I noticed a new mat had formed with ‘cheese’ on it, which is hydrilla grass that grows from the bottom to the surface. When it gets hot, it blooms yellow, and we call it cheese. It tells you that there’s a good canopy with lots of thick grass and that’s where the big ones live. I punched in there and caught a 7-pounder – my fifth fish.”

“I focused on one island Friday and did the exact same rotation through the mats. I started out with two 5-pounders, and after about an hour I caught a 3. Then, after an hour and a half, boom – I caught the big one – a 9-pound, 4-ouncer,” said Troughton. “I followed that up with a 7, and then another 3. Then I stopped fishing and helped my co-angler catch his fish, that was enough for the day.”

On Saturday, Troughton mixed in some new baits, catching two keepers punching mats, two on the Splash-It, one on a ½-ounce, green-pumpkin Z-Man/Evergreen Jack Hammer ChatterBait with a Yamamoto Zako trailer. He also used a wacky-rigged, green-pumpkin Yamamoto Senko. He said the early bite died as the sun got up, so he finished out his day at one of his primary islands, noting that the conditions had changed.

“The wind blew out the cheese and there were clouds so you couldn’t see the grass underneath. We scrambled a bit – it was tough today,” said Troughton.

The top 10 pros on the California Delta finished:

Troughton’s 9-pound, 4-ounce, largemouth was the biggest of the tournament in the Pro Division and earned him the day’s Boater Big Bass award of $214.

Jacob Traba of Pacifica, California, won the Co-angler Division and a Ranger Z175 with a 90-horsepower outboard motor with a three-day total catch of 14 bass weighing 40 pounds, 2 ounces.

The top 10 co-anglers on the California Delta finished:

Rodriguez caught the biggest bass of the tournament in the Co-angler Division Thursday, a fish weighing 7 pounds, 3 ounces. For his catch, Rodriguez earned the day’s Co-angler Big Bass award of $71.

The Costa FLW Series on the California Delta was presented by Power-Pole was hosted by Russo’s Marina and Sugar Barge RV Resort and Marina. It was the third and final FLW Series Western Division tournament of the 2018 regular season. The next Costa FLW Series tournament will be the Southwestern Division finale, held Oct. 4-6 on Fort Gibson Lake in Wagoner, Oklahoma, and is presented by Mercury. For a complete schedule, visit FLWFishing.com.