The father-son duo of David and Sean (pictured) Mulkey of the Joe Bass team trail lead on the first day of the Toyota Bonus Bucks Bassmaster Team Championship on Norfork Lake with 15 pounds, 3 ounces. 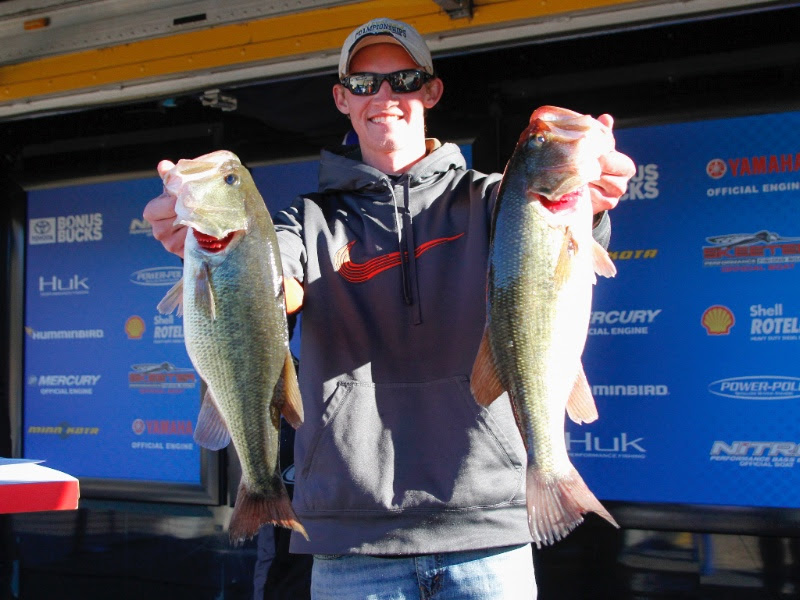 MOUNTAIN HOME, Ark. — Some bass tournament anglers like to run and gun, and others like to methodically work a spot looking for the right bites.

David and Sean Mulkey of the Joe Bass team trail in Missouri had no choice — they were forced to stay in one spot on Wednesday during the first round of the Toyota Bonus Bucks Bassmaster Team Championship. Their boat broke down during the first hour of fishing, and they had no other option than to remain where they were and hope for the best.

The father-son tandem found the bass they needed, and they now lead the two-day national team fishing championship taking place on Norfork Lake in northern Arkansas.

The Mulkeys, who reside in Ash Grove, Mo., boated a five-bass limit that weighed 15 pounds, 3 ounces. That total gave them an edge over brothers Brett and Beau Govreau of St. Louis, Mo. who are in second place with five bass totaling 14-5.

In all, 162 two-person teams (324 anglers) from 33 states and two foreign countries (Canada and Australia) are taking part in the team championship on 22,000-acre Norfork Lake. Each qualified for the event as one of the top performing teams on their local tournament trails this season.

The Mulkeys made the best of what could have been a frustrating day after their motor “blew up” while running in open water shortly after 7 a.m. Wednesday.

“We started losing power,” David said. “My son heard it blow. We started fishing right where we were. We couldn’t do much else.”

While the elder Mulkey was bent over the outboard assessing the damage, 21-year old Sean hooked a 4-pounder. Soon after, he added another 4-pounder to the livewell, and David followed with a 3-pounder of his own. Though their bite slowed from that point, they landed two more keepers later in the day to reach their limit.

The Mulkeys relied on their trolling motor to cover a half-mile radius of water all day long. Luckily for them, they broke down less than a mile from the launch and were able to easily navigate back in time for weigh-in.

“I had no idea we would be leading this tournament after having the motor blow up early in the morning like that,” David said after the Day 1 weigh-in was complete. “It could have been bad. But the spot we fished, my son caught a 3-9 there in practice. We knew it had bass on it.”

Now, the issue is finding a boat to use for the second day of the team championship. The Mulkeys planned to spend the evening trying to secure another vessel or fix their motor in time for Thursday’s 6:45 a.m. launch.

The Govreau brothers fish with U.S. Anglers Choice team trail, and they located quality fish during practice. They found them again in the same spot on Wednesday despite a 40-degree temperature drop during the past 48 hours. The Govreaus said they will head to new water on Thursday. The high temperature is expected to be 38 degrees in Mountain Home.

“Same technique, but different area,” Brett Govreau said. “What we found is just as good, if not better than, what we were fishing. It’s hard to stay on one spot in what could be a four-day tournament.”

There’s a lot at stake in this championship. The winning duo will receive a Nitro Z20 and Mercury 225 Pro XS boat/motor package valued at $41,995. The prize includes a Minn Kota trolling motor and Lowrance electronics.

But the victors’ spoils bring much more than just prizes. There are bragging rights that go with being the top tournament trail team of the year, as well as the chance to rub elbows with the biggest names in professional bass fishing when they are recognized at the annual Bassmaster Classic Night of Champions.

The final spot in the 2018 GEICO Bassmaster Classic presented by DICK’S Sporting Goods is on the line too. The six anglers who compose the Top 3 teams after the team portion of the tournament is complete Thursday will fish individually for a Classic berth. Each of that sextet of surviving anglers will have his weight zeroed after Thursday’s weigh-in, and the angler with the heaviest two-day total caught Friday and Saturday will head for the Classic on South Carolina’s Lake Hartwell in March.

Georgia’s Barron Adams and Trevor Prince of the Chattanooga Bass Association are in third place with 13-2. They finished third in last year’s team championship.

Keith Allen and Jeffery Montgomery of Angler Nation (Oklahoma) are fourth with 13-1, and Marc Czachowski and Mike Purse of Joe Bass in Missouri are fifth with 12-13.

The Mountain Home Area Chamber of Commerce is hosting the event.