Ott DeFoe of Knoxville, Tenn., wins the 2017 Bass Pro Shops Bassmaster Northern Open No. 3 held on Douglas Lake out of Dandridge, Tenn., with a three-day total weight of 50 pounds, 3 ounces. 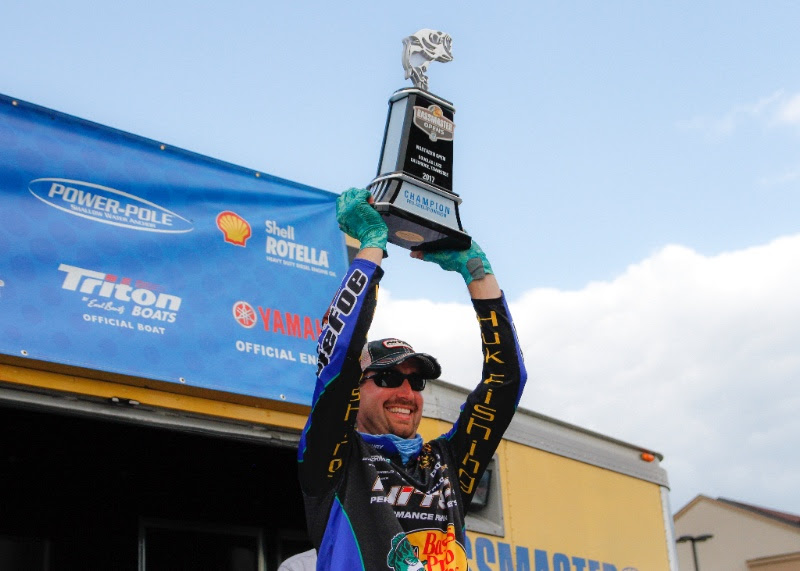 DeFoe ran up the French Broad River again with his Tracker tunnel hull aluminum boat that produced 17-5 limits the first two days. He struggled early Saturday and caught only five keepers all day, but it was enough to clinch the victory.

“The water has not been stable all week,” DeFoe said. “I was thinking today could be really, really good just because the French Broad had been falling. But there was some extra flow in the Pigeon River this morning, and it seemed to kind of throw the fishing off a little.”

The local favorite caught his first fish of the day on a bladed jig and his second flipping a black-and-blue 1/2-ounce Terminator Pro Jig with a Bass Pro Shops Elite Chunk. Switching to a Texas-rigged Bass Pro Shops Bull Hog, DeFoe caught his next two keepers and still had three hours to catch his fifth bass. He went to a bank where he had caught big fish in the past and boated a 4 1/2-pounder on the Terminator Jig that clinched the victory.

All of his fish throughout the tournament came from 1 to 3 feet of water.

Newcomerstown, Ohio, pro Hunter Shryock camped on his best spot Saturday, and it produced a 9-14 limit to move him into second place.

“I fished the way that I like to fish — junk fishing — and I kind of learned something as the tournament was going on,” said Shryock, who finished with 39-13. Shryock learned he could catch bass as shallow as 6 inches on isolated wood cover either swimming a 1/4-ounce swim jig with a Berkley Chigger Craw trailer or flipping a Texas-rigged Berkley Chigger Craw.

Other Top 5 finishers were Brian Latimer of Belton, S.C., who was third with 39-11, David Williams of Newton, N.C., who was fourth with 36-1 and Alex Wetherell of Middletown, Conn., who placed fifth with 33-4.

Williams earned the Power-Pole Captain’s Cash Award of $500 on the pro side for being the highest-placing angler who is registered and eligible and uses a client-approved product on his boat.

The event was hosted by the Economic Development Alliance of Jefferson County, Tenn.