HUNTSVILLE, Ala. (Aug. 7, 2016) – Professional angler John Cox of DeBary, Florida, brought a five-bass limit to the scale Sunday weighing 11 pounds, 8 ounces – enough to claim the title of Forrest Wood Cup Champion at the Forrest Wood Cup at Wheeler presented by Walmart. Cox went wire-to-wire with a four-day total of 20 bass for 54-13, winning by 4-pounds, 3-ounces over second-place angler Michael Neal of Dayton, Tennessee, and won the $300,000 top cash prize. The tournament featured 50 of the top bass-fishing anglers in the world competing for professional bass-fishing’s world championship. 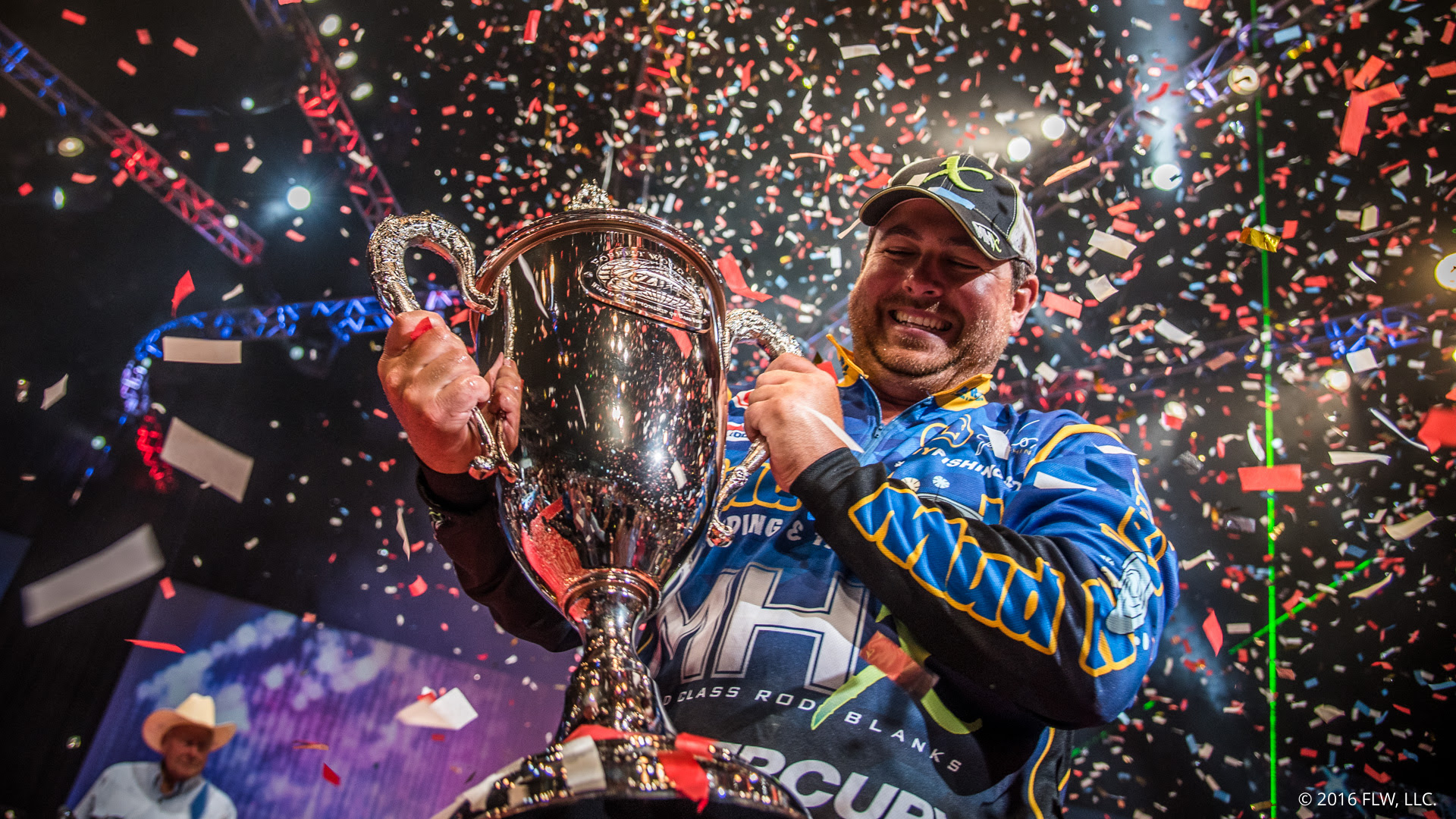 “It’s been an amazing week,” said Cox, who earned his third career FLW Tour win and pushed his career earnings to more than $920k. “I didn’t think that one spot had enough fish in it to win, but it did. I’ve tried to get back in places like that in other Forrest Wood Cups to win, and it just didn’t work out. But this lake has so many of those little log-infested creeks, and I knew this would be a great opportunity to make it work, and it did.”

Cox’s winning area was located way in the back of Cotaco Creek, seven miles back off of the main river. Cox said that it would take him more than 40 minutes each day to work his Crestliner aluminum boat to the back of the creek, plowing over logs and timber as he made his way to the honey hole.

“That spot was the third creek arm that I checked in practice,” Cox said. “There was layer of duckweed and it looked like a great area to throw a frog.”

Cox said that he caught the majority of his fish throughout the week on a black- or bluegill-colored Jackall Iobee Frog on an MHX FP-885 rod. He also caught a few fish on a white ¼-ounce buzzbait and a Yamamoto Senko.

“The fish were definitely chomping the frog,” Cox said. “I was skipping it as far as I could under the trees into the shade.

“The key for me this week was definitely my aluminum boat and Mercury outboard,” Cox went on to say. “I would not have been able to get as far back into the creek and catch them out of that spot if I had been in a fiberglass rig.”

With his $300,000 victory, Cox made fishing history becoming the first pro to ever win a modern world championship bass-fishing tournament from an aluminum boat.

The top 10 pros finished the tournament in:

A complete list of results can be found at FLWFishing.com.

Overall there were 48 bass weighing 106 pounds, 12 ounces caught by pros Sunday. Nine of the final 10 anglers weighed in five-bass limits.

The 2016 Forrest Wood Cup at Wheeler Lake presented by Walmart was hosted by the Huntsville/Madison County Convention and Visitors Bureau.

Coverage of the Forrest Wood Cup will be broadcast in high-definition (HD) on the NBC Sports Network (NBCSN) when “FLW” airs October 18 from 1 p.m.-2 p.m. EDT. The Emmy-nominated “FLW” television show airs on NBCSN, the Pursuit Channel and the World Fishing Network and is broadcast to more than 564 million households worldwide, making it the most widely distributed weekly outdoors-sports television show in the world.

FLW is the world’s largest tournament-fishing organization, providing anglers of all skill levels the opportunity to compete for millions in prize money in 2016 across five tournament circuits. Headquartered in Benton, Kentucky, with offices in Minneapolis, FLW conducts more than 235 bass-fishing tournaments annually across the United States and sanctions tournaments in Canada, China, Mexico and South Korea. FLW tournament fishing can be seen on the Emmy-nominated “FLW” television show, broadcast to more than 564 million households worldwide, while FLW Bass Fishing magazine delivers cutting-edge tips from top pros. For more information visit FLWFishing.com and follow FLW at Facebook, Twitter, Instagram, YouTube and Snapchat: @FLWFishing.