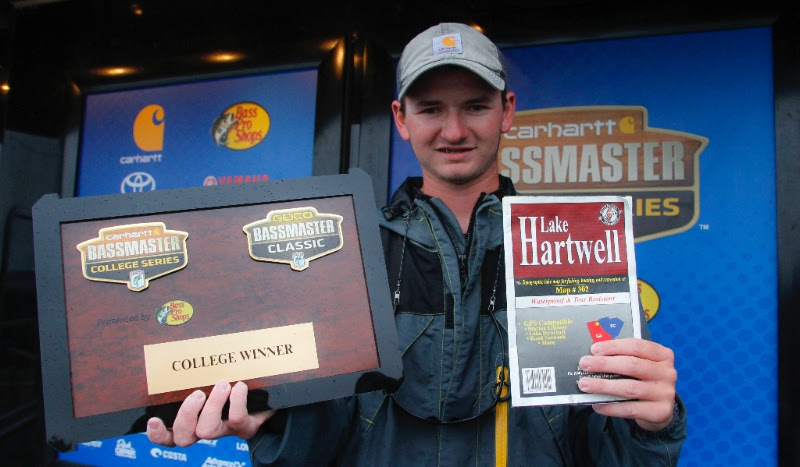 Last week they really clicked, claiming the Carhartt Bassmaster College Series National Championship presented by Bass Pro Shops on Lake Bemidji in Minnesota. And this week, when the teammates were split up and battled their way through separate sides of the College Series Bracket on Serpent Lake, each dominated their matchups to make it to today’s finals.

There, it was each young man for himself as they competed for a single invitation to the 2018 GEICO Bassmaster Classic presented by DICK’S Sporting Goods on Lake Hartwell, South Carolina.

Foutz turned in the top performance of the bracket week, putting together a limit of 16 pounds, 5 ounces and easily defeating his teammate, Lee, who had 10-12.

Foutz showed his versatile fishing skills beginning with the National Championship on Lake Bemidji, where he and Lee fished shallow for largemouth bass. In the bracket competition on Serpent Lake, however, he focused his attention strictly on smallmouth. That decision proved to be a wise choice as he stayed consistent over three days of action. He defeated Bethel University’s Brian Pahl in the first round of competition with 14-1 and then Chico State’s Chad Sweitzer with 13-6. He saved his best for last as his 16-5 pushed him over teammate Lee, and now he is the newest angler to notch a berth in the 2018 Bassmaster Classic.

“It’s an unbelievable feeling, one that is hard to describe unless you live it,” Foutz said. “I’ve been fishing ever since I could crawl, and as long as I can remember I wanted to fish the Bassmaster Classic. I’m fortunate enough to have fulfilled a lifelong dream.”

The 19-year-old freshman (he turns 20 on June 9, 2018) just completed his first year of college and will now compete against the best anglers in the world, including his favorite angler Greg Hackney, in the Super Bowl of Bass Fishing.

“There are a bunch of unbelievable anglers at Bryan College,” Foutz said. “They push Jake (Lee) and myself to be the best we can be. I look forward to representing college fishing this next year.”

A turning point in the final day of competition happened when Foutz caught a 4-pound smallmouth, which tied for the biggest bass of the bracketed competition. He started slow, but after catching a 3-15 and then a 4-0, Foutz began to see the writing on the wall.

“When I caught that 4-0 I felt like I gave myself a shot to win,” Foutz said. “I kept culling up throughout the day and when I hit the 16-pound mark I was pretty certain I won.”

Foutz concentrated on smallmouth by drop shotting a Gary Yamamoto Shad Shape worm on offshore humps that varied in depth. The shallower humps were in 12- to 15-feet of water, but his best areas were deeper than 20 feet.

He is the first National Championship winner to also take home the College Classic Bracket championship since this format was created in 2012. He and partner Lee are the third set of teammates to make it through the entire bracket and face off in the finals. Auburn University teammates Matt Lee and his brother Jordan did so in 2012 with Matt winning and punching his ticket to the 2013 Classic. The next year Jordan Lee was matched against his teammate, Shane Powell. Lee won and made it to the 2014 Classic at Lake Guntersville.

“My great-grandma is my biggest fan, she sends me a text every night before a tournament,” Foutz said. “This is something I wanted to do for her.”

With his win, Foutz will be given the use of a fully rigged and wrapped Toyota Tundra and Nitro Z20 bass boat with a 225 Mercury Pro XS equipped with Power-Pole shallow-water anchors, Humminbird electronics and a Minn Kota trolling motor. Carhartt awarded him with $7,500 in prize money to help with travel as he also gained entry into not only the 2018 Classic, but also all nine Bass Pro Shops Bassmaster Opens in 2018.