Casey Is Catching On To Smallmouth

Casey Ashley has been saying for years that he doesn’t like smallmouth.

But given the fact the 2015 Bassmaster Classic Champ sits soundly inside the Top 5 of a Toyota Bassmaster Angler of the Year points race that’s tighter than the dry storage lids of his Triton, well, it’s fair to say, the soft spoken South Carolina pro is learning to live with the infamously ghost like bronze bombers that have dominated the summer portion of the Elite Series schedule. 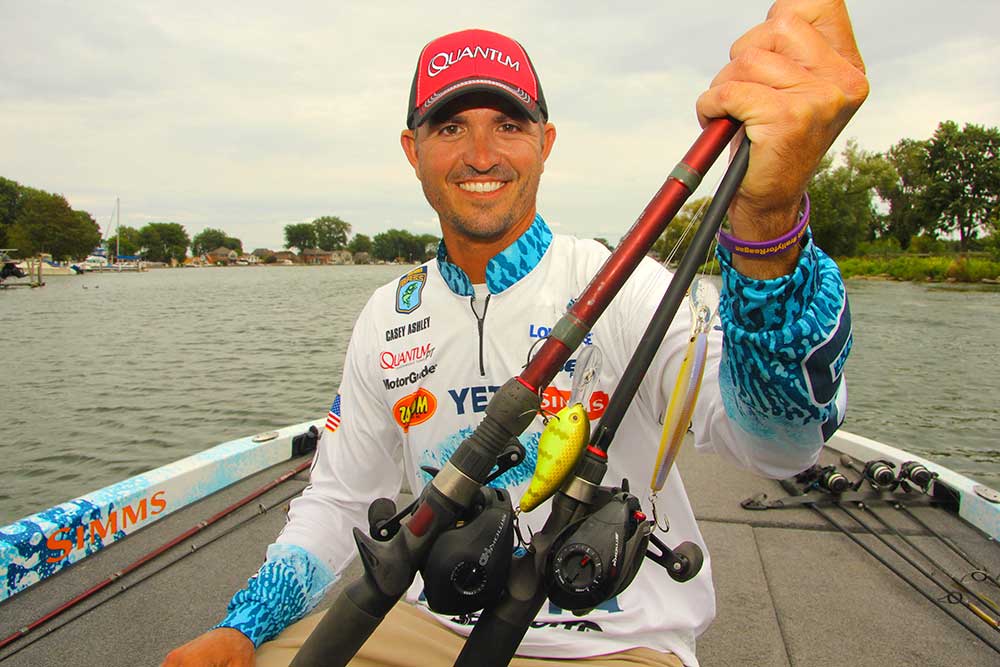 Fact is, he’s more than just tolerating smallmouth, he’s figuring them out – mostly by taking his own approach with a plan that involves a lot of treble hooks, fairly shallow water, and perhaps most importantly – a mindset of finally accepting the fact that smallmouth are not largemouth.

“I still don’t like ‘em,” grinned the likeable Ashley minutes after dropping 18 pounds of smallmouth on the scales at Day 1 of the Advanced Auto Parts Bassmaster Elite Series on Lake St. Clair. “They’re still way too fickle to my liking. I found two spots late in practice Wednesday that were loaded with smallmouth, and today I never caught a single fish from either of those areas.”

“A southern largemouth fisherman like myself is programmed to finding and catching fish from targets like a brushpile, a laydown tree, stumps, docks, whatever – but with smallmouth, you can forget about all that,” says Ashley. “I’ve learned that you stand just as good a chance by tossing the lure behind your shoulder at smallmouth — especially on a massive, flat-bottomed lake like St. Clair, because they roam areas, instead of staying locked on targets,” explains Ashley.

To explore expansive ‘areas’ Ashley has learned to lean heavily on faster moving lures like jerkbaits and crankbaits versus mega-popular drop shots and tube jigs.

“It seems like I catch bigger smallmouth on jerkbaits and crankbaits than I do a drop shot, and those horizontal moving baits give me a better chance to cover more water too,” explains Ashley.

“I’ve also learned to accept the fact that I’m way better at catching ‘em in less than 10-feet of water when at all possible. You force me to fish deeper than about 10-feet, and I feel like I’m out of my league,” admits Ashley.

Ashley has no strict allegiance to a crankbait sponsor, so the ‘free agent’ mixes a blend of brands that often include Lucky Craft Staysee jerkbaits, and Strike King 5XD crankbaits, but one shared constant is the mid-range gear ratio of the reels he throws them on.

“I use the 6.6:1 Quantum Smoke HD for cranking because it’s got a big spool with a lot of line capacity, and for the jerkbait, I use the brand new Smoke S3 in a 6.1:1, because it casts so far and smooth,” he explains.

Surprised by his success?

When asked if he was surprised to be sitting so high in the Toyota Bassmaster Angler of the Year points after a bevy of smallmouth tournaments, Ashley replied, “Maybe just a little surprised, but at the St. Lawrence River I was able to find fish in the current around structure, which makes me feel more comfortable, and at Champlain, I was able to blend a few largemouth into the mix.”

As for St. Clair, he caught every fish he weighed-in during the Elite Series event of 2015 on a jerkbait, and finished 13th. So don’t expect him to change much. It’s a shallow-water plan he’s comfortable with, and it gets great results … even though he still doesn’t like smallmouth.