Casey Ashley caught a solid limit amid Thursday’s sweltering heat to sit near the top of the leaderboard. The always easy-going 2015 Bassmaster Classic Champ took a minute prior to Friday’s launch to talk about Lake Travis, Toyota Trucks, swimbaits, and even a mention of Texas native Willie Nelson. 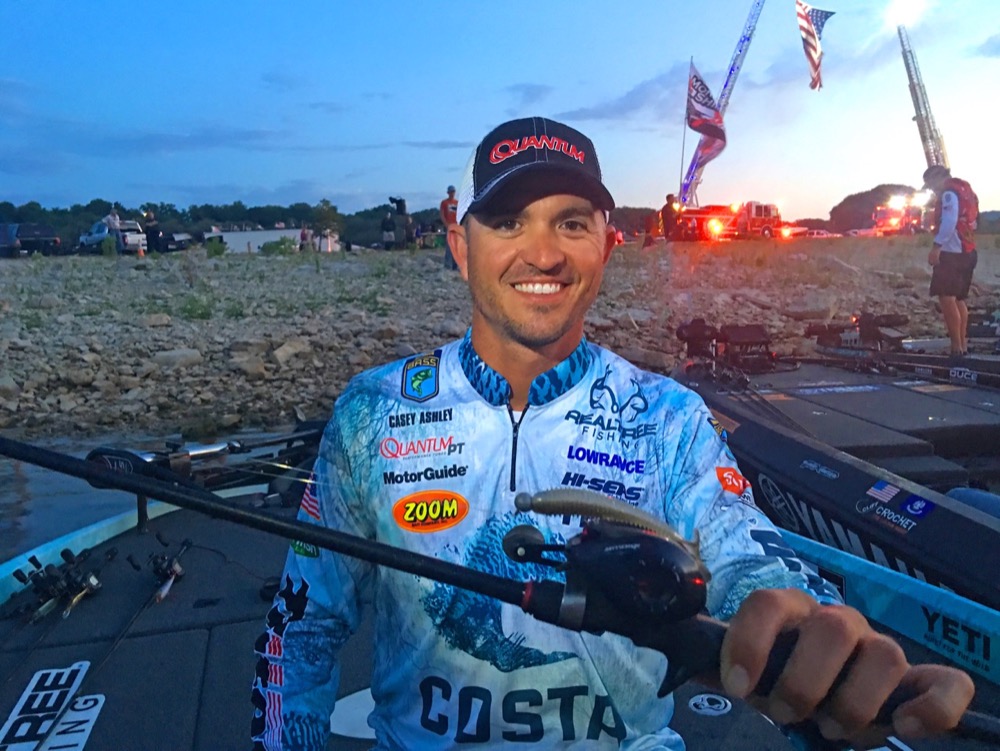 Q: What was the biggest surprise amid Day 1 of competition here at Toyota Bassmaster Texas Fest to benefit Texas Parks and Wildlife Department?

Casey: The biggest surprise was that I actually caught a decent limit, because while you may catch 100 fish a day here, the randomness of catching a big one is truly an unknown.

Q: Your biggest fish yesterday was a 4 pound 5 ounce largemouth. How did you catch it?

Casey: I caught it on one of my absolute all time favorite lures – a green pumpkin Zoom trick worm rigged on a Casey Ashley Shaky Head from Greenfish Tackle.

Q: This week’s tournament is title sponsored by Toyota, and you’ve bought a bunch of Tundras. How many Toyota Tundras have you owned throughout your Elite Series career?

Casey: I’ve bought five Tundras, and my daddy has bought two as well – so seven Tundras total between the two of us.

Q: You’re a music man. You recorded a demo CD in Nashville a few years back, and you’ve sang the National Anthem on a handful of occasions before blast-off at an Elite Series tournament. What song is stuck in your head this morning?

Casey: Kenny Chesney’s “Lucky Old Sun” – which is pretty fitting for the hot weather we’re having here, and the fact it features Texas native Willie Nelson singing along with Kenny.

Q: Toyota Bassmaster Texas Fest helps raise money that Texas Parks and Wildlife uses to fund urban youth fishing initiatives. You have a youth angler of your own – a 5-year-old son named Troy. Tell us about fishing with him?

Casey: I’ve learned from taking Troy fishing that size and species don’t matter. It’s all about getting a bite. And still there are times when I can be catching one crappie after another, and he’ll still lose interest. So when they tell you they’re done, don’t make them stay, or you’ll ruin the experience.

I will say here at Lake Travis would be a great place to take a kid fishing, because there’s so many fish in here. I’d just tie on a little 3” swimbait for him, and let him cast and wind it on a Zebco reel. And as many little 12 to 13” bass that swim here – I’ll promise ya he’d have a real good chance of catching one.