Casey Ashley Off to A ‘Rocky’ Start at Grand Lake Elite

The limestone, sandstone, and dolomite beds that cradle Grand Lake o’ the Cherokees yielded a disappointing 11-pound limit for Casey Ashley on Day 1 of the Academy Sports + Outdoors Bassmaster Elite. 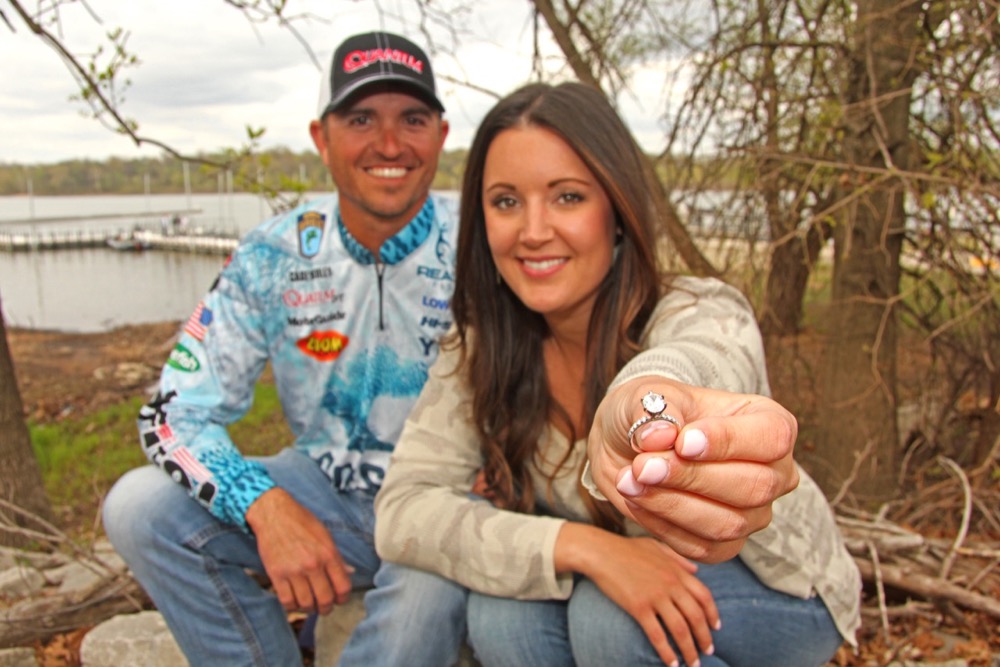 But the diamond he presented to longtime girlfriend Kenzi Hartman, in front of her friends and family at her parent’s home just down Interstate-44 in Broken Arrow last weekend, provided the emotional equivalent of his 2015 Bassmaster Classic win.

Grand Lake holds special significance to Casey and Kenzi. The first time they met one another was when the South Carolina pro traveled to the 2013 Bassmaster Classic on Grand Lake to work for sponsors such as Triton, Costa, and Quantum at the Classic Outdoor Expo.

It was one of the few Classics he’s failed to qualify for in his illustrious young career, but he netted a first date during the visit when Bob Bagby, a longtime marketing leader at Quantum, arranged for Casey to meet Kenzi, who Bagby knew through her former part time job at a local golf course.

To say the first date went well, would be like saying Casey ain’t half bad at pitchin’ a jig. Six months after they met, Casey asked Kenzi to move from Northeast Oklahoma to be with him fulltime in South Carolina, and to travel the Bassmaster Elite Series tour with him.

The Oklahoma State grad resigned a great job she had in sales, said a gut-wrenching goodbye to her parents and many close friends, and has been with Casey in South Carolina, and wherever the professional angling lifestyle takes them, ever since.

For the last five years, romantic trips to the mountains, beaches and many other significant destinations passed without the marriage proposal every girl dreams of. “All those great times came and went, and he never proposed, so I really had no clue he would ask me to marry him at my parents last weekend, but it was absolutely perfect,” says Kenzi.

“Rule #1 before any serious bass angler gives a girl a diamond ring is that she has to be a good cook, and she has to be able to back a boat trailer down a ramp. Kenzi can do both, and not only can she cook, but she’s a dang good cook,” says the Quantum pro.

The other rule is no runny eggs. The 2015 Classic champ and country boy, who once recorded a demo CD in Nashville under the tutelage of highly accomplished songwriter and avid angler Rodney Clawson, refuses to eat eggs over easy. But Kenzi’s homemade chicken Alfredo … well, now … that’s the tall brunette’s very best dish according to Casey.

Kenzi’s chicken Alfredo, Popeye’s spinach, General Mills’ Wheaties – whatever it takes to get Casey back in the hunt on the leaderboard – should probably be on the menu to make up for Casey’s small limit on Day 1.

“Back home, you don’t even start to think about looking for bass on spawning beds until the water temp hits 60-degrees. So with the water being in the high 50s and dingy here, I went shallow crankin’ until late in the afternoon on Thursday when I saw two 3-pounders on a spawning bed, and I knew right then I had missed-out on how they were catchin ‘em here,” says Ashley.

He mighta missed Grand Lake’s largemouth, but he’ll head east to the next Elite Series event at Kentucky Lake with one heckuva catch named Kenzi, and a diamond on her finger.