GREENVILLE, South Carolina – (April 18, 2018) – Carhartt-sponsored angler Jordan Lee winning back-to-back Bassmaster Classics wasn’t the only great story to come from the 2018 Bassmaster Classic. In addition to Lee’s win, a cooperative effort between Carhartt, B.A.S.S., and the South Carolina B.A.S.S. Nation epitomized the concept of working together for the greater good to collect a win of their own. 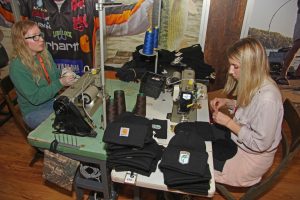 During the three-day 2018 Bassmaster Classic Outdoor Expo inside the Greenville Convention Center from March 16 -18, Shelby Horn and Savannah Sparks, two hard working associates from the Carhartt manufacturing facility in Kentucky, were in the Carhartt booth sewing the iconic B.A.S.S. logo on Carhartt’s famous “A18” acrylic watch cap.

Over the course of the exciting Classic consumer show, hundreds of gracious fans donated $5 to the South Carolina B.A.S.S. Nation Conservation fund at the Carhartt booth in exchange for one of the limited-edition hats ideally suited for cool weather work or fishing.

“I like the creativity involved in my job, and watching it all come together from a pattern to a finished garment is really rewarding. And having a lot of fishing fans at the Classic thank us for still making Carhartt in America has been really neat too,” said Sparks, a Carhartt employee of five years.

Alongside Sparks at the Bassmaster Classic was Horn, who also reflected on the goodness of the project. “Our little town of Irvine, Kentucky, is home to one of three Carhartt sewing facilities in America, and I love what I do so much that I actually bought a sewing machine for my home,” said Horn. “At first, I was nervous about being here at the Classic, but it’s been really neat because so many fishing fans have thanked us for being here, and our work is going toward conservation and lake cleanup.”

“This $6,000 donation will be huge to funding the more than 500 youth anglers in our South Carolina B.A.S.S. Nation during their trash pick-up this summer. In fact, we’ll probably make a friendly competition out of it to see what schools can pick up the most trash around the lakes. But it takes money to transport these kids and buy supplies for the cleanup, so this money is really, really, appreciated,” concludes Randy Mosley, President of the South Carolina B.A.S.S. Nation.

About Carhartt, Inc. Established in 1889, Carhartt is a global premium workwear brand with a rich heritage of developing rugged products for workers on and off the job. Headquartered in Dearborn, Michigan, with more than 4,700 associates worldwide, Carhartt is family-owned and managed by the descendants of the company’s founder, Hamilton Carhartt. For more information, visit www.carhartt.com and follow @Carhartt on Twitter.