LEESBURG, Fla. (Feb. 25, 2018) – Canadian pro angler Chris Johnston of Peterborough, Ontario, brought a five-bass limit weighing 17 pounds, 6 ounces, to the scale Sunday to win the FLW Tour at the Harris Chain of Lakes presented by Lowrance with a four-day total of 20 bass weighing 79 pounds, 6 ounces. Johnston’s cumulative weight was enough for him to edge second-place pro and fellow Canadian Jeff Gustafson of Keewatin, Ontario, to earn his first FLW Tour win and a check for $125,000. 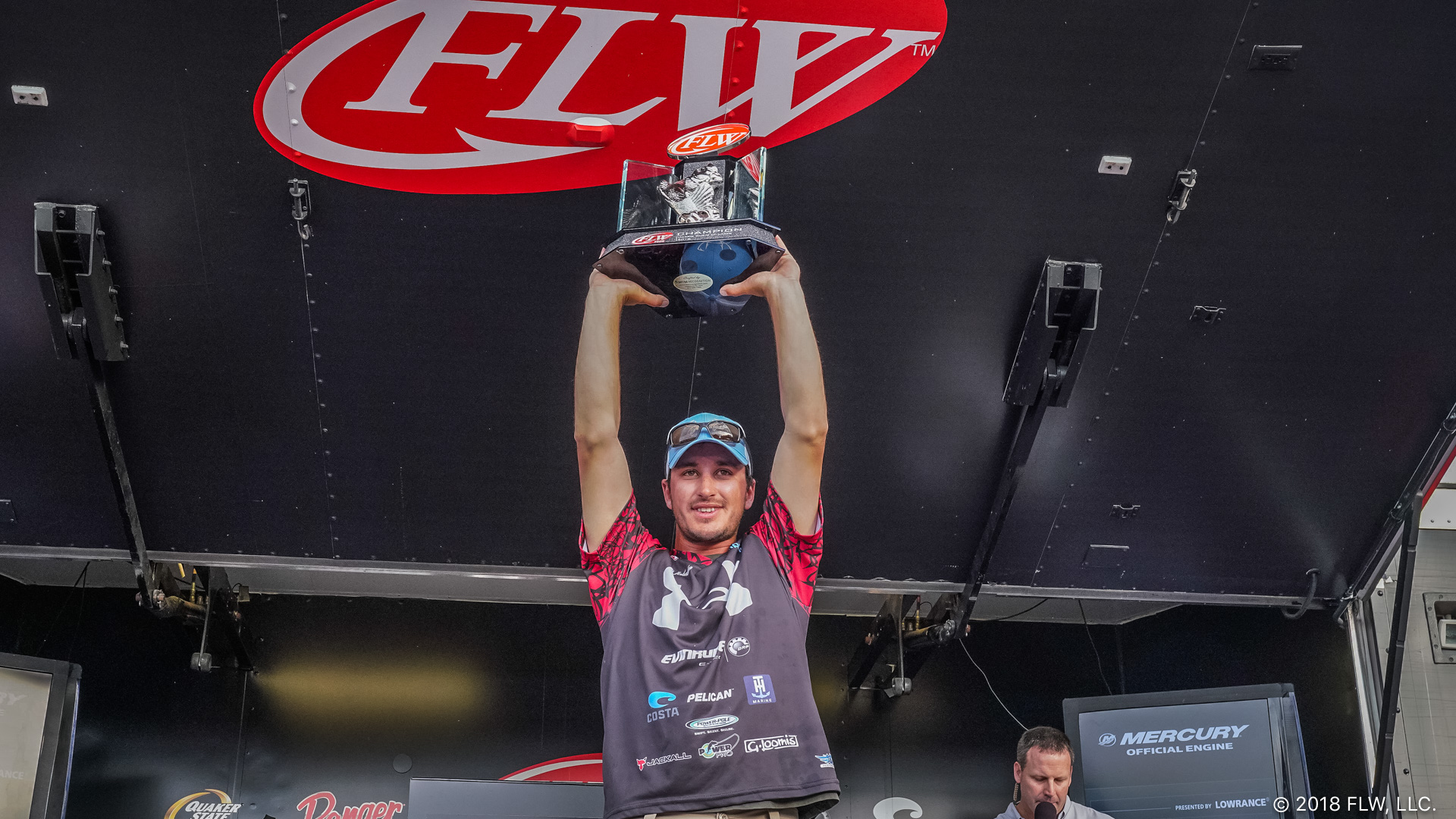 “You couldn’t ask for anything better – two Canadians up here (on the weigh-in stage),” said Johnston, who is now leading the 2018 FLW Tour Angler of the Year standings after posting two strong finishes to open the FLW Tour season. “We’re buddies. We’re going to go home happy and back to some snow and ice. It’s a vacation down here, coming to Florida, and for us to finish one and two, what more could you ask for?”

Johnston’s first stop on Sunday was a 12-foot-deep, 100-yard indentation along a weed edge on Lake Harris. A key location for him this week, Johnston used a jerkbait and ½-ounce gold-colored lipless crankbait to lure fish feeding around a shad spawn.

“I went there first thing in the morning, but was a little nervous because the bite was getting shorter each day I visited it,” said Johnston. “I couldn’t catch them there reeling. I’d let the crankbait go to the bottom and then yo-yo it to make it look like a dying shad. I’d do that after they quit chasing the jerkbait.”

Johnston weighed a tournament-best 25 pounds, 7 ounces, from the area Friday, but could only catch one useful fish Sunday – a 3-pounder.

“I moved on to my secondary area, which was near Gussy (Gustafson),” said Johnston. “It was another hydrilla flat, about a mile from the takeoff ramp. Those fish were on top, so I switched to a (white) vibrating jig with a Jackall Rhythm Wave swimbait and casted over it.”

Johnston said he hit a small flurry, but ultimately decided to leave and try other areas. After two hours with no bites, he returned to the flat and was able to cap off his limit.

“I stopped a ways out from where I’d hit the first flurry, and just as I put the trolling motor down I saw a big swirl about 50 yards away,” said Johnston. “I fired my vibrating jig out, made a couple cranks and the bass knocked it like 2 feet. It was my biggest fish today – a 4 pounder. In 15 minutes I caught around 10 bass, including a couple of 3-pounders. That last flurry was what sealed the deal for me.”

The top 10 pros on the Harris Chain of Lakes finished:

Ryan Eckman of Okeechobee, Florida, won the Co-angler Division and $20,000 Friday with a two-day total of 10 bass weighing 35 pounds even, followed by Robert Kimbrough of Vero Beach, Florida, who finished in second place with 10 bass totaling 34-14, worth $7,600.

The total purse for the FLW Tour at the Harris Chain of Lakes presented by Lowrance was more than $930,000, including $10,000 through 60th place in the Pro Division. The tournament was hosted by Lake County, Florida. The next event for FLW Tour anglers will be the FLW Tour at Lake Lanier presented by Ranger, March 8-11 in Gainesville, Georgia, hosted by Gainesville Convention & Visitors Bureau.

Television coverage of the FLW Tour at the Harris Chain of Lakes presented by Lowrance will premiere in high-definition (HD) on NBC Sports Network (NBCSN) April 11 from Noon-1 p.m. EST. The Emmy-nominated “FLW” television show airs on NBCSN, the Pursuit Channel and the World Fishing Network and is broadcast to more than 564 million households worldwide.

In FLW Tour competition, pros and co-anglers are randomly paired each day, with pros supplying the boat, controlling boat movement and competing against other pros. Co-anglers fish from the back deck against other co-anglers. The full field of 368 anglers competed in the two-day opening round. Co-angler competition concluded following Friday’s weigh-in, while the top 30 pros based on their two-day accumulated weight advanced to Saturday. Only the top 10 pros continued competition Sunday, with the winner determined by the heaviest accumulated weight from the four days of competition.