LEESBURG, Fla. (Feb. 24, 2018) – Canadian pro angler Chris Johnston of Peterborough, Ontario, held his lead after Day Three of the FLW Tour at the Harris Chain of Lakes presented by Lowrance after bringing a five-bass limit weighing 16 pounds, 12 ounces, to the scale. Johnston brings a slim 14-ounce advantage over second-place pro Tony Dumitras of Winston, Georgia, heading into championship Sunday when the final 10 anglers will compete for the top prize of up to $125,000. 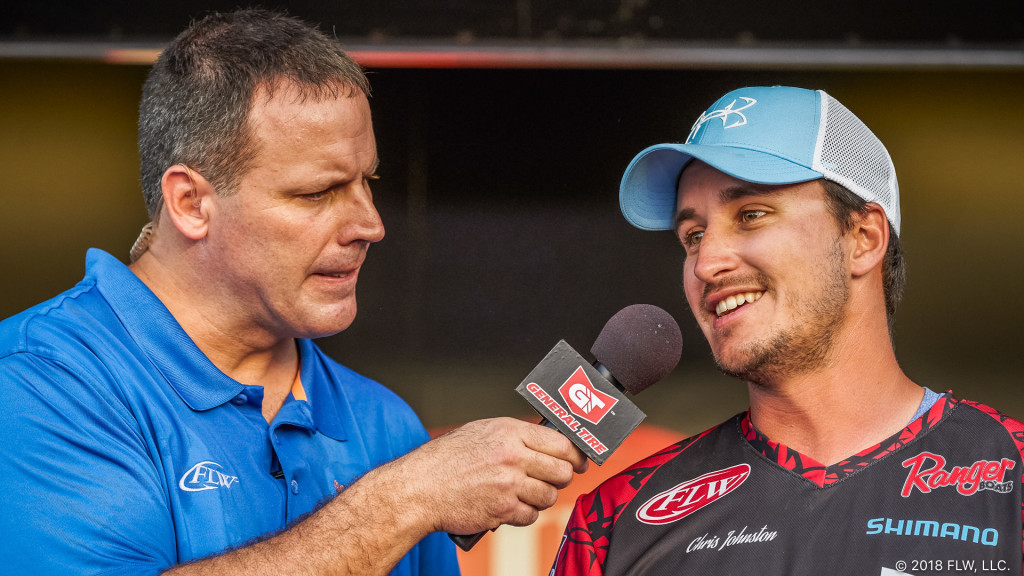 Johnston started his day in the same area he caught the bulk of his weight Friday – a 12-foot-deep weed edge with a long indentation on Lake Harris. He said he used two baits to catch the majority of his fish – a jerkbait and a lipless crankbait.

“It started out with a bang. By 8:15 (a.m.) I pretty much had all of my weight,” said Johnston, who is seeking his first career win on the FLW Tour. “The fish were right where they were supposed to be.”

Between 9 a.m. and 2 p.m., it was a different story. Johnston said he stayed on Lake Harris, but managed to catch only a few short fish in other hydrilla-filled areas.

“With 20 minutes left in the day I got into some fish and upgraded my weight by a quarter-pound,” said Johnston. “There were a lot of fish and some shad in the area, and they were chewing. I wish I’d had another half hour out there because I think I could’ve gotten a big one.”

Johnston said his game plan for Sunday will be similar to what he’s done for the past two days.

“After the morning spot I’m hoping they will be where I left them biting today,” said Johnston. “If fish aren’t in my starting spot, I’m going to be in some trouble.”

The top 10 pros advancing to the final day of competition at the Harris Chain of Lakes are:

Finishing 11th through 30th are:

Ryan Eckman of Okeechobee, Florida, won the Co-angler Division and $20,000 Friday with a two-day total of 10 bass weighing 35 pounds even, followed by Robert Kimbrough of Vero Beach, Florida, who finished in second place with 10 bass totaling 34-14, worth $7,600.

In FLW Tour competition, pros and co-anglers are randomly paired each day, with pros supplying the boat, controlling boat movement and competing against other pros. Co-anglers fish from the back deck against other co-anglers. The full field of 368 anglers competed in the two-day opening round. Co-angler competition concluded following Friday’s weigh-in, while the top 30 pros based on their two-day accumulated weight advanced to Saturday. Only the top 10 pros now continue competition Sunday, with the winner determined by the heaviest accumulated weight from the four days of competition.

The total purse for the FLW Tour at the Harris Chain of Lakes presented by Lowrance is more than $930,000, including $10,000 through 60th place in the Pro Division. The tournament is hosted by Lake County, Florida.

Prior to the weigh-in Sunday, FLW will host a free Family Fishing Expo at the Venetian Gardens from noon to 4 p.m. The Expo is the perfect opportunity for fishing fans to meet their favorite anglers, enjoy interactive games, activities and giveaways provided by FLW sponsors, and learn more about the sport of fishing and other outdoor activities.

Television coverage of the FLW Tour at the Harris Chain of Lakes presented by Lowrance will premiere in high-definition (HD) on NBC Sports Network (NBCSN) April 11 from Noon-1 p.m. EST. The Emmy-nominated “FLW” television show airs on NBCSN, the Pursuit Channel and the World Fishing Network and is broadcast to more than 564 million households worldwide.