Jacob Foutz (left) and Jake Lee, both of Bryan College, will move on to the final day of the 2017 Carhartt Bassmaster College Series Classic Bracket presented by Bass Pro Shops. At stake is a berth in the 2018 GEICO Bassmaster Classic presented by DICK’S Sporting Goods to be held on Lake Hartwell out of Greenville/Anderson, S.C. 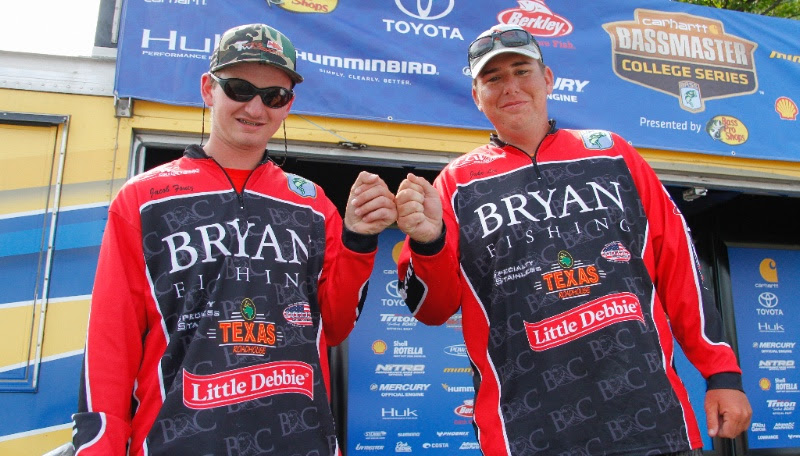 DEERWOOD, Minn. — Since the 2017 season started on January 26, thousands of college anglers began battling for a chance at a single berth in the 2018 GEICO Bassmaster Classic presented by DICK’S Sporting Goods. The dust settled today, two anglers stand atop the Carhartt Bassmaster College Series and will compete for seven final hours to determine a bracket champion.

And those two anglers are teammates on the Bryan College bass fishing team: Jacob Foutz and Jake Lee. The two Tennessee anglers survived through opposite sides of the bracket to face each other in Wednesday’s finale.

Foutz outfought Chad Sweitzer of Chico State University during the semi-final round. After a good start for both anglers that had them close at halftime, Foutz prevailed with 13 pounds, 6 ounces by the end of the day. Most of his weight came because of a trio of important 3-pounders.

“I went through a flurry and put three good fish in the boat at the same spot,” Foutz said. “I’ve stayed with a drop shot in my hand and stuck it out with that technique.”

Sweitzer’s limit wasn’t enough to eclipse Foutz’ original weight. His main technique included flipping docks with a jig, which he relied on for quality bites.

Foutz has been consistent with his technique of drop shotting in deep water. His Round 1 total of 14-1 put him into the semifinals. No matter the weather that hits Serpent Lake on Wednesday, Foutz thinks his strategy will pay off.

“I’m not sure how the weather might impact my pattern, but I’m only going to worry about the things I can control,” Foutz said. “I’m just going fishing like every day at this lake, if I need to adjust with the conditions, I’ll try my best to do so.”

Although they seem to be catching good weight from Serpent Lake, these anglers are still learning this fishery day by day. On the other side of the bracket was Foutz’ teammate Jake Lee and Bethel University’s Cole Floyd.

Floyd led the entire field in weight Monday as he caught 16-1, but the second day of competition offered different conditions. The clouds and wind disappeared and blue bird skies with slick conditions hurt his pattern. He did his best to prolong the topwater bite he had found as he caught two quick keepers, but Jake Lee overtook him soon afterward and put together a solid 12-pound plus limit.

Floyd finally filled his limit at the midday break and was within striking distance. He fell short and Lee took that matchup with 13-4 to Floyd’s 12-0.

A freshman at Bryan College, Lee was a member of the inaugural Bassmaster High School All-American Fishing Team in 2015, and now he is one day away from college bass fishing’s biggest championship.

“We said from the beginning that if we had to lose to someone we would want it to be one of us,” Lee said. “We both want to win it bad, but neither one of us is going to be too sad since one of us will win. We will still be partners next year if Coach lets us.”

For the first time since the Bracket’s creation, a college freshman will qualify for a Bassmaster Classic. Although they won’t compete until the middle of their sophomore year, it is unprecedented for two freshmen to be in this position.

They are also the third set of teammates to make it through the eight-angler bracket and meet in the championship round. Matt Lee and Jordan Lee of Auburn did so in the 2012 bracket, while Jordan Lee and Shane Powell followed it up again in 2013. The Lee brothers currently are Bassmaster Elite Series pros, and Jordan is the reigning Bassmaster Classic champion.

Another first for the bracket format is that a member of a National Championship winning duo will take home the individual bracket honor. Andrew Upshaw did so in 2011, but that was before the 8-person bracket was implemented.

In addition to the Classic berth, also at stake in Wednesday’s final matchup is paid entry into all nine Bass Pro Shops Bassmaster Opens next year. Foutz and Lee will fish from 7 a.m. to 11 a.m. CT before stopping at midday for an hour. Then they will compete from noon to 3 p.m., after which one will be awarded the honor of representing the Carhartt Bassmaster College Series for the 2018 season.