Brandon Lester of Fayetteville, Tenn., takes the lead on the second day of the 2018 Academy Sports + Outdoors Bassmaster Elite at Grand Lake out of Grove, Okla., with a two-day total weight of 43 pounds, 9 ounces. 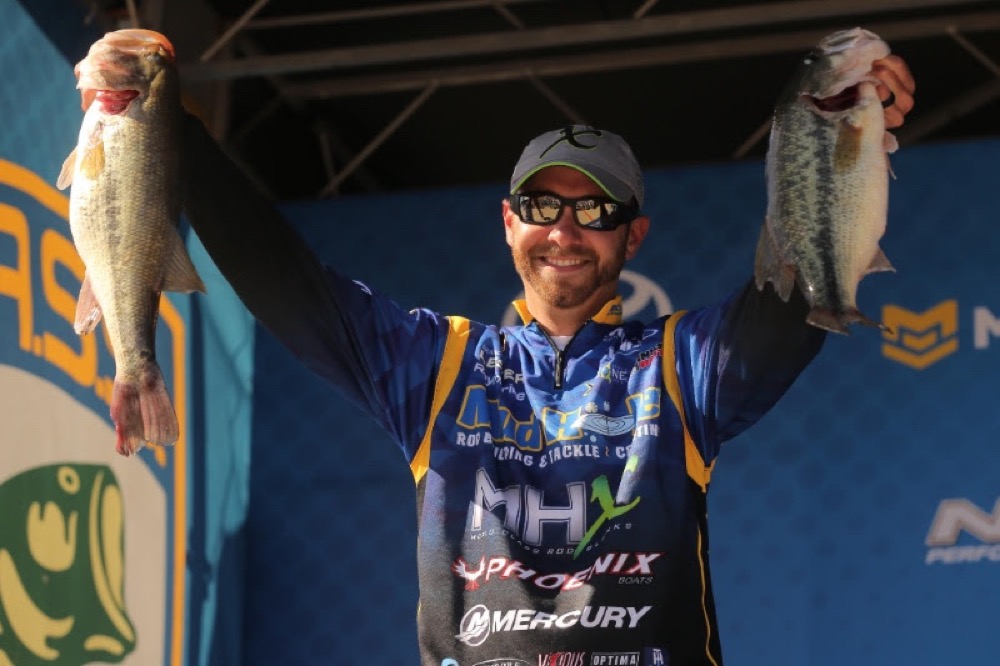 GROVE, Okla. — Brandon Lester of Fayetteville, Tenn., is no stranger to pressure. Just over a month ago, he and his wife Kimberly welcomed a new baby girl to their family.

Today he weighed the largest limit of his fishing career — a staggering 26-pound, 3-ounce limit of five bass that pushed his two-day total to 43-9 and took the lead at the 2018 Academy Sports + Outdoors Bassmaster Elite at Grand Lake O’ the Cherokees.

With $100,000 on the line for first place, the 30-year-old pro was calm and collected after walking off of the official Bassmaster weigh-in stage — not a common look among anglers who just took the lead over the world’s top-bass anglers.

“There’s a lot of fishing to be had still, and I’m not getting ahead of myself,” Lester said. “However, I like what’s happening to my fishing area, and I’m feeling pretty good about things.”

Based on the calendar, Lester believes the spawn is behind schedule on the Oklahoma lake. That is, it’s happening right now.

“These bass are moving in to spawn in impressive numbers,” he said. “This time of year, the fish are very susceptible to being caught, but they can also be spooky. Some anglers are sight fishing, but I’m covering water slowly and methodically.

“I had my fish early enough in the day that I decided to go look for more productive water as a backup plan. I like what I’ve got going on, and I also like what I found this afternoon.”

The current weather trend is indicating more sun and increasing temperatures, which should only improve the fishing across the lake.

“The spawn is happening right now, and I feel like my areas are reloading with fresh fish by the day,” Lester said.

Another angler who is comfortable atop the Bassmaster leaderboard is four-time Bassmaster Classic champion Kevin VanDam from Kalamazoo, Mich.

VanDam began his day in fourth place, but dominated the field according to unofficial weights listed on BASSTrakk, available at Bassmaster.com.

After bringing 20-10 to the scales, VanDam’s two-day total weight is 42-9, placing the seven-time Toyota Bassmaster Angler of the Year in second place.

“I covered quite a bit of water today looking for the right bites,” he said. “I had a very productive morning, so that afforded me some time to scout new areas for upcoming days of the tournament.”

Having backup areas an angler can rely upon if his primary pattern falls apart is critical to fishing — and especially winning — a four-day tournament.

“The extra practice time I had today was productive. Most of what I found was a bust, but I did learn a few things that will help with my game plan going into tomorrow.”

VanDam believes some heavy limits of bass will be brought to weigh-in over the next two days.

The 108-angler field was cut to the Top 50 for Saturday’s semi-final round of competition.

“The reduced number of boats on the water will eliminate a lot of fishing pressure occurring on Grand Lake right now,” VanDam said. “I think the fans are in for a treat by the time this thing wraps up on Sunday. We are fishing this lake during one of the best weeks of the year.”

Alabama’s Bill Weidler is currently leading the $1,500 Phoenix Boats Big Bass Award, thanks to a heavy 7-3 largemouth bass he caught during Thursday’s opening round of competition.

Daily takeoffs will occur Saturday and Sunday at 6:15 a.m. CT out of Wolf Creek Park, and weigh-ins are scheduled in the same location beginning at 3 p.m.