Bassmaster Elite Series Event At St. Lawrence River Should Be Another Smallmouth Slugfest

He’s a successful Canadian angler with vast experience on northern fisheries that are known for producing big smallmouth bass. So, it’s only natural that many consider him one of the favorites in next week’s Berkley Bassmaster Elite at St. Lawrence River presented by Black Velvet. 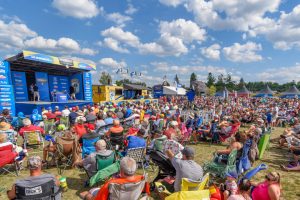 The same is true of his brother, Cory.

But for anyone who thinks the Johnston boys are going to run away with the seventh Elite Series event of the season, Chris says “Not so fast.”

“Everyone thinks we’re gonna go dominate the St. Lawrence, and that kind of makes me nervous,” said Chris, who makes his home in Peterborough, Canada, about three hours from Waddington. “We don’t fish the river very often. I’m actually closer to Lake Ontario, and when there’s a tournament out of the St. Lawrence, I go into the lake every time to fish.

“I have a little knowledge of the river, but not like everyone thinks.”

Competition days will be Aug. 15-18, with daily takeoffs at 9 a.m. ET from Whittaker Park Boat Launch. Weigh-ins are scheduled for Whittaker Park each day at 5 p.m.

Much to the Johnstons’ dismay, the waters of Lake Ontario will be off-limits. But the river has proven in past years that it has more than enough smallmouth to produce heavy weights. In last year’s event, the Top 5 anglers had four-day weights in the 90- to 95-pound range.

Historically, anglers have used a collection of finesse tactics on the St. Lawrence — primarily drop-shot rigs, spybaits and small swimbaits — to catch bass in deep water. But Johnston said he hopes to avoid that route.

“My best odds to win will be if the fish are shallow, which could be the case since there’s been a colder spring this year,” he said. “The deep drift is something anyone could get on and catch 25 pounds. They’re not hard to catch if you get on the right area. You just have to start doing drifts — and I think that makes it hard for anyone to gain a real advantage doing that.

“My best-case scenario would be fishing shallow water for bass I can actually see.”

Besides battling for the tournament’s $100,000 first-place prize and the coveted blue trophy that comes with every Elite Series win, anglers will earn valuable points in the Toyota Bassmaster Angler of the Year race. With only four tournaments left, the race for one of the most prestigious titles in professional fishing is heating up.

Cook has no experience on the St. Lawrence — and he thinks that could be a good thing.

“I feel like whenever you fish somewhere new for the first time, you really fish the moment instead of doing what worked in the past,” Cook said. “I don’t have any pre-conceived notions. I’m starting completely fresh.”

Though he said AOY buzz has been hard to escape, Cook said he’s not going to put any extra pressure on himself just because he’s in first place.

“I try to put it out of my mind, but it gets brought up so often that it’s kind of hard to,” he said. “I’m not gonna fish any differently. I’m not going on cruise control or anything like that. I’m gonna fish to win just like I always do.”

Though he honed his craft fishing for big largemouth in Florida, Cook said he’s excited about the idea of fishing one of the nation’s best smallmouth fisheries.

“I love fishing for big smallmouth — even though I know there’s some really good untapped largemouth fishing there,” he said. “I may end up mixing up the two a little bit, but I’m gonna focus mainly on the smallmouth.

“Catching a 25-pound limit of smallmouth is one box I’d definitely like to check.”

A full field of 75 anglers will compete Thursday and Friday before cutting to the Top 35 for Saturday’s semifinal round. Only the Top 10 will advance to Championship Sunday.

On Saturday and Sunday, the Outdoors Expo will open at 11 a.m. at Whittaker Park, giving fans a chance to take demo rides in a Skeeter/Yamaha boat and to see the latest products from the likes of Toyota, Carhartt and Berkley/Abu Garcia.