Arey: Frogs, Lemonade and the 4 th of July

When Team Toyota’s Matt Arey is home between tournaments, rather than spend tons of time fishing his favorite local waters, you’ll more likely find him assisting his two young daughters in their efforts to make tie dye t-shirts or find seven words to describe bubble gum as daughter Reese completes a homework assignment about adjectives. 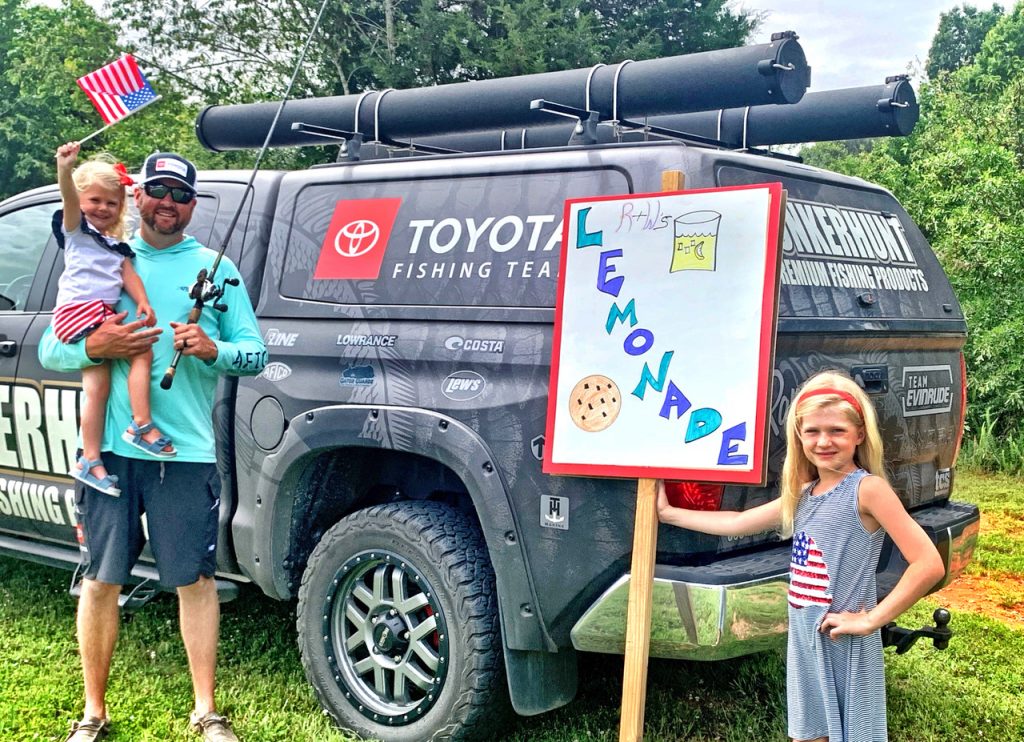 Given his nearly full time role as “Mr. Mom” while wife Emily fulfills her full-time career obligations as Director of Records and Educational Partnerships at their local community college, Arey’s ability to consistently sit high in the Bassmaster Angler of the Year points race is worthy of great respect.

The goodness of Matt and Emily’s marriage and parenting partnership was recently reflected in lemonade when daughter Reese teamed with neighbors and close friends to sell the refreshing summer drinks to raise money for a good cause.

The youngsters netted $266 and donated the money to the Community Math Academy, which helps mostly underprivileged students improve their math skills and confidence through personal attention and tutoring while encouraging equality for all members of the Cleveland County, NC community.

Reese’s hard work and generous heart will soon be rewarded with a family beach trip. The Areys plan to spend fun times together over the 4th of July weekend about four hours from home at Pawleys Island, south of Myrtle Beach, SC.

“My wife Emily and the girls are beach bums. They could play in the sand all day, but I have trouble sitting still that long. So I may squeak in a fishing trip for trout, flounder, or maybe go a little further off shore one day,” says Arey. “Most importantly though, is just seeing the joy on my daughters’ faces once their feet hit the sand.”

Trout and flounder aside, when quizzed to name one lure all largemouth anglers should consider throwing right now, Arey was quick to name a Lunkerhunt compact skirted frog that comes out of the package with the legs already trimmed. He throws it on 50-pound P-Line braided line, spooled to a fast 8.3:1 Lew’s baitcaster, and warns it’s a lure that often gets more and more bites as summer progresses and aquatic vegetation grows thicker.

“You might not get a ton of bites on a frog, but don’t be afraid to throw it all day, and be ready for big bites, because even in hot summer some of the biggest fish in the lake stay shallow eating bluegill, mayflies and frogs,” warns Arey.

From tie-dyes to mayflies and lemonade in between, Matt Arey is indeed a knowledgeable man with a deep love of family who has earned a third place position on the Bassmaster Angler of the Year leaderboard.

The post Arey: Frogs, Lemonade and the 4 th of July appeared first on Bass365.com.