In my little universe, April is as much about soft plastic lizards as the Easter Bunny and the Masters at Augusta National. In fact, while the Chinese Zodiac calendar spotlights 2018 as the “Year of the Dog” — I’d like to go ahead an officially nominate April as forever being bass fishing’s “Month of the Lizard. 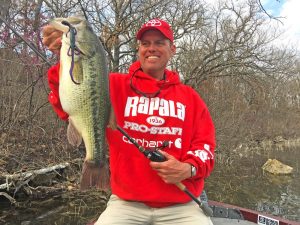 Like my Carhartt raingear, I don’t leave home in April without several bags of 5, 6, and 8” soft plastic lizards during this often rain-soaked month centered around various phases of the annual spring spawn.

Yet, you’d be hard pressed to find a professional bass tournament in recent years where a lizard was credited with being the winning lure, or even playing a huge role in the victor’s creel.

Has the lizard fallin out of fashion? Has this highly versatile lure that was a mainstay in the 1980s and 1990s lost its fish catching ability? It certainly hasn’t for me, but what do the best anglers on the planet and the lure manufacturers say?

Mike Iaconelli: “Lures are kinda like clothes – designs and shapes fall in and out of fashion, but I’ll promise you this, there’s a Flambeau box full of lizards in my boat right now, and it’ll stay there all year with the exception of the dead of winter,” says the Team Toyota pro.

“The thing that makes a soft plastic lizard special is the flat belly paired with a tail and legs that have great but subtle swimming action,” says Iaconelli. “It glides perfectly behind a Carolina Rig in the pre-spawn, and all the way into summer, plus it’s also great Texas rigged shallow around the spawn because its slender shape gets in and out of brush and vegetation without hanging up.”

“As for the reason you don’t hear about it more – I think it’s because guys don’t want to spotlight it. They keep it kinda under the collar. But again, come check my boat, and you’ll find a box full of lizards right now,” he says adamantly.

“Oh, and the 9 pound 11 ounce beast I caught last year at the Bassmaster Classic on Lake Conroe came on a 6” green pumpkin Berkley Power Lizard,” adds Ike for emphasis on the lizard’s modern day effectiveness.

Jacob Powroznik: “One of the reasons we used lizards a lot more 20 years ago is because our options on soft plastic lures were a lot more limited than they are these days,” says Quantum pro Jacob Powroznik. “We didn’t have the beaver style lures or the wide variety of creature baits like the J-Bug I designed for V & M Lures. So we used a lizard, and trust me … it got the job done.”

“And I’ll promise you it still gets the job done. Just like it did two decades ago when we were constantly pitching them into flooded bushes or Carolina Rigging them, and smokin’ a lot of good bass on them,” says the Virginia pro. 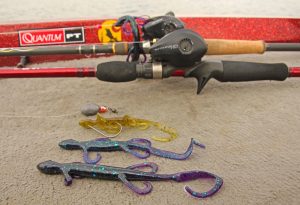 What do the Sales Numbers say about Lizards?

It would be difficult to argue Zoom Lure Company didn’t have the biggest hand in the popularity boom of soft plastic lizards in the late 1980s. Avid angler Chris Baxter has been employed by the super successful Georgia-based lure company most of his adult life, and has had a front row seat to the soft plastic lizard’s life cycle to date.

Even though they may not be as trendy on pro angling trails as they once were, Baxter watched the lizard’s rise to popularity 25 years ago, and for the most part, says it has stayed there, according to retail sales numbers.

“Zoom Lure Company started in 1977, and by 1987 and 1988 everybody was wanting our pumpkin seed colored lizards to Carolina Rig,” remembers Baxter.

“I think we’re selling as many lizards now in 2018 as we ever did because anglers are more comfortable throwing larger lures than they once were. So the 8” Magnum Lizard we make offers another sales opportunity we couldn’t capitalize on as well 30 years ago, and the 6” still remains a very important part of most every amateur angler’s tackle collection,” says Baxter.

While the 8” variety is most often Texas rigged and pitched to shallow flooded habitat, the 4” is good for early spawn. The 6” is most versatile, and hence the 6” is the top selling size according to Baxter.

“Back in the early 1990s it seemed like everybody flipped and pitched a lizard shallow, and by the mid 1990s a Carolina-rigged lizard was big time popular. Our overall bait selection wasn’t as versatile back then – so we leaned on lizards to catch a ton of fish,” reflects Baxter. “And the fact is, they still would catch a ton of fish, if we’d just simplify our approach and tied one on more often.”

I agree with Baxter. In a fishing universe with an often-overwhelming number of choices in soft plastic shapes and sizes, there’s one sure way to simplify things. Be like “Ike” and keep a few bags of lizards in your boat nearly year round.

Texas rigged or Carolina rigged, their effectiveness remains as dependable as the Azaleas bushes blooming each April at Augusta National for the Masters.