Crayfish, mudbugs, yabbies, crawdads – call ‘em what you want – there are more than 300 different species of them in North America, and their bodies range in color from red to olive green, and even blue.

But it’s the tiny bit of bright orange on the very tips of their large ‘pinchers’ (chelipeds) that have become a minor obsession for anglers like 2014 Toyota Bassmaster Angler of the Year Greg Hackney, and other avid anglers like myself.

The orange highlights on many of their pinchers make these freshwater lobster species look like they’re fresh from a $30 manicure at the local nail salon.

Trying to replicate this naturally fashionable color scheme includes the use of paints and dyes on soft plastics, as well as custom painting crankbaits – because we’re absolutely convinced that adding a tiny touch of bright orange generates more bites. 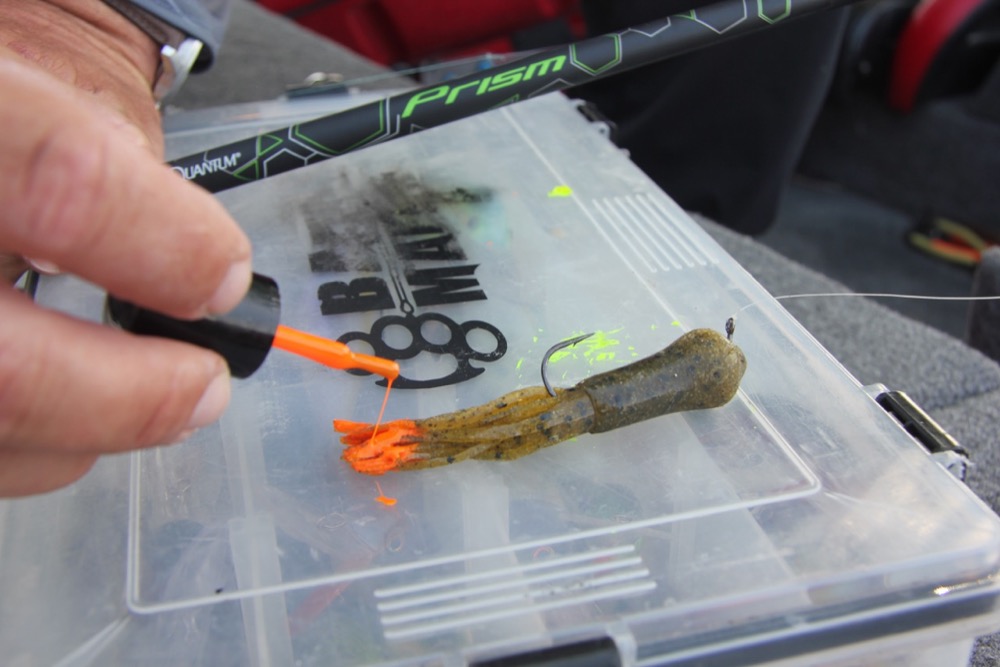 There’s some science behind our thinking

“For whatever reason, orange seems to be the color Mother Nature chose to dot the tips of the pinchers, which likely serves as an advantage as they seek one another for reproduction, and also a warning color for predator fish to ‘stay away’ – but somewhat unfortunate for the crawfish, the contrasting orange also helps bass to find them even in off colored water,” explains Gene Gilliland, B.A.S.S. Director of Conservation, who is also a passionate bass angler.

“I’ve always dyed the tips of soft plastics with orange or chartreuse, but only in recent years have I started using the paint,” says Hackney. “Paint is great because it takes a lot less to get a ton of bright color on the lure,” he explains. 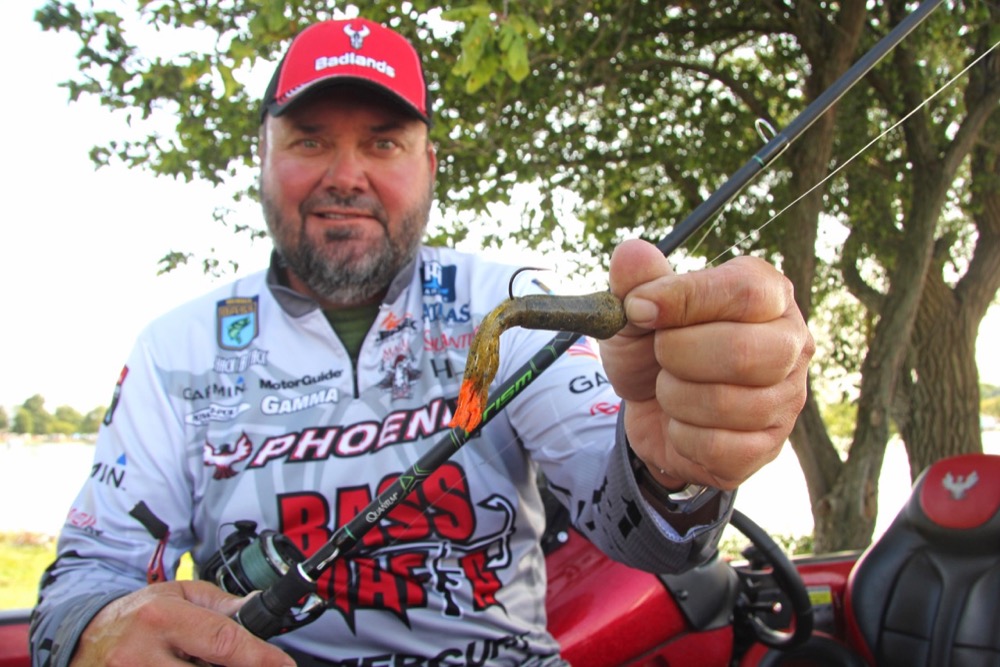 “I do believe that smallmouth are truly sight oriented fish that are attracted to bright colors – they’re just such an inquisitive species, but for largemouth, I use a little less paint, because they don’t seem to like it quite as bright,” says Hackney, who is using a very affordable $99 Quantum Prism spinning rod for most of his smallmouth fishing.

Widely produced, as well as customs worth leaning on

Hackney is by no means alone. It seems his penchant for applying Spike-It paints and dyes is shared by every bass angler who has ever stepped on a trolling motor pedal.

Nearly everybody carries either a bottle of the Southeast Georgia based company’s Dip-N-Glo, scented marking pens, or paint, to provide a simple and very effective dab of chartreuse, orange, red, or blue.

But there’s also a handful of both mass-produced lures, and custom models perfectly ‘painted’ or colored right out of the package to satisfy my orange pincher obsession.

In fact, my earliest recognition of orange’s importance was on the original, now vintage, model #V86 phantom green craw Wiggle Wart, featuring a rather transparent olive green body, and yes, a hint of orange on the diving bill.

These days I lean on Oklahoma angler and custom lure painter Beau Kemp, whose work can be seen @WaylonsBoot on Instagram, to add plenty of orange to my Wiggle Warts and widely produced Rapala DT series of crankbaits. Although, we’ve discovered the Rapala color called “Rusty” offers a bite-generating scheme with plenty of orange right out of the package. 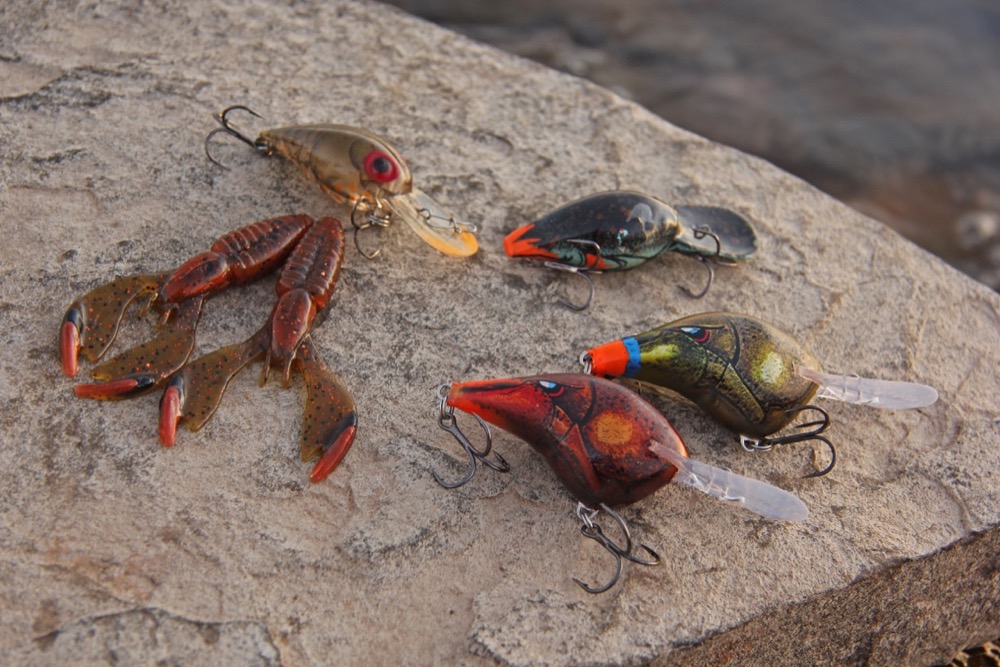 Now, when it comes to soft plastics, I’ve yet to discover an orange-tipped, more natural looking creation, than those made by Paul Krew. Based near Buggs Island Reservoir on the Virginia-North Carolina border, Krew has been making hand-poured plastics for 30 years, and his efforts are truly works of art.

I personally prefer his compact little hand-poured soft plastic Weasel Craw, but it’s Krew’s color schemes that really set him apart. For example, I had always wanted a soft plastic craw with an army green body, some blue – and of course, plenty of orange on the pinchers – and he is the only person I’ve ever found to make them.

And while I can’t honestly say I’ve used his hand painted crankbaits – they too are among the Rembrandts of the casting plug universe.

“Orange just seems to be a color they see a lot in the natural universe – from sunfish to crawfish pinchers, and so whether I’m pouring plastics, or painting crankbaits – I’ve often emphasized orange,” says Krew.

I couldn’t agree more with Mr. Krew. I’m absolutely convinced the addition of orange to a crawfish imitating lure helps generate more bites, especially from smallmouth, but also largemouth to some degree as well. 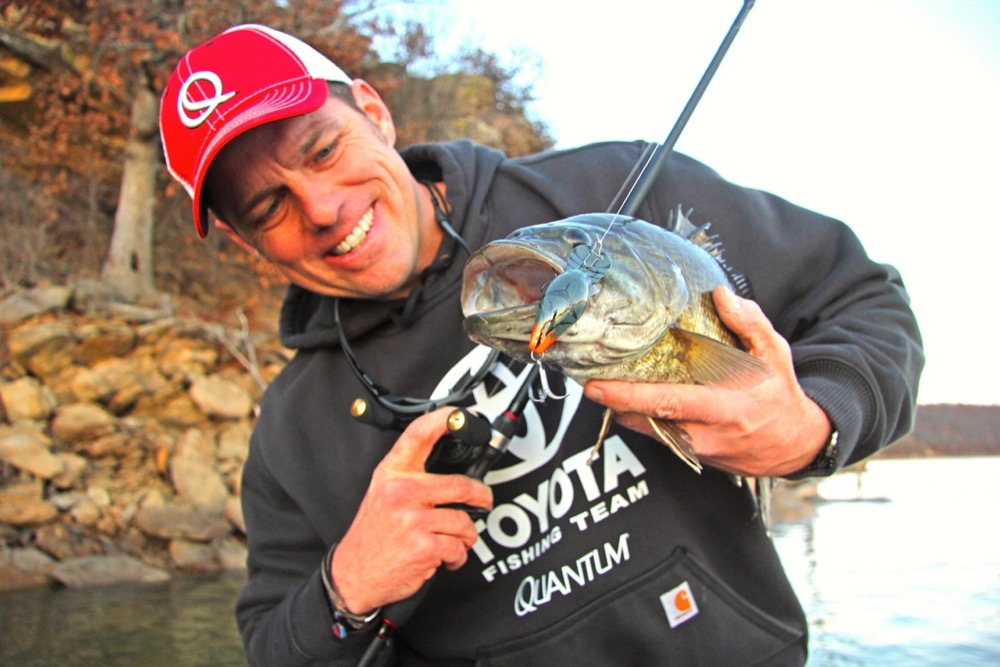 So even though we tend to default to our more natural bass fishing color pallette of green pumpkins, blacks and blues – adding a splash of orange can certainly increase your catch rates.