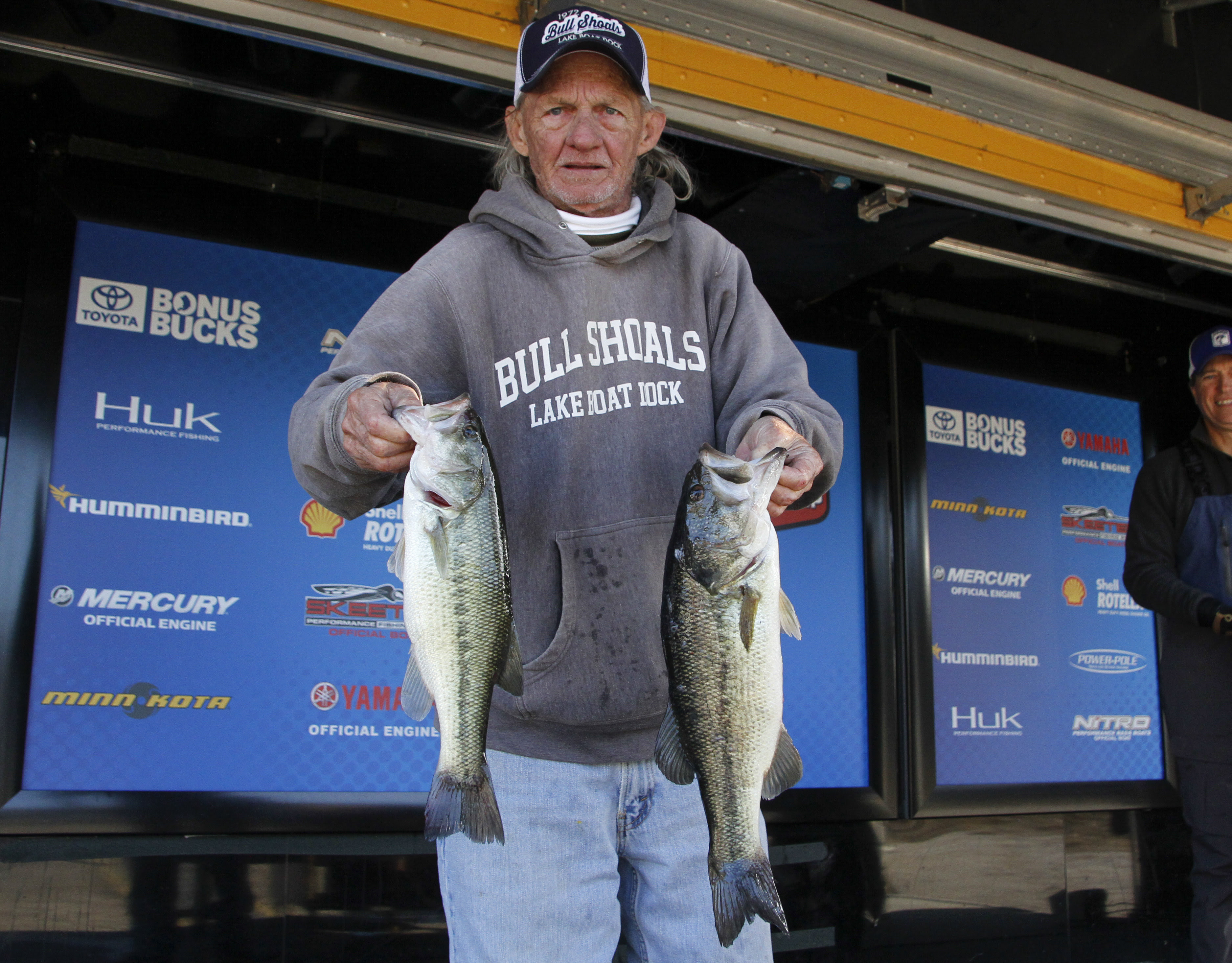 MOUNTAIN HOME, Ark. — Given the 15-degree temperatures on Norfork Lake Friday morning, it sounds ridiculous that five of the six remaining anglers in the Toyota Bonus Bucks Bassmaster Team Championship are pleading for more wind.

But those five anglers say a good, windy day is the only thing that could give them a shot at winning the Classic Fish-Off portion of this tournament.

Right now, the rest of the field is chasing Robert Dodson Sr., a 71-year-old angler from nearby Harrison, Ark., who caught only three bass totaling 6 pounds, 6 ounces on Friday. That’s not much in a typical Bassmaster tournament, but with the bass extremely tight-lipped on Norfork Lake, it was enough to give Dodson the lead after Day 1 of the Fish-Off.

The rest of the field could muster only three bass among them. Ryan Butler of Blue Eye, Mo., is in second place with two bass that weighed 3-10. Beau Govreau, a St. Louis, Mo., resident who teamed with his brother Brett to win the Team Championship on Thursday, caught the only other bass on Friday, but it was a good one. He’s in third place with a 3-4 keeper that he hooked with only 14 minutes of fishing time remaining.

Brett Govreau of St. Louis, Mo., Dustin Lippe of Lampe, Mo., and Robbie Dodson Jr. also of Harrison, Ark., all zeroed Friday. Along with Butler and the younger Govreau, they are the chorus of anglers who say wind is key to stirring the bass bite to life Saturday.

Dodson Sr., who fishes on the Joe Bass team trail, liked the calm conditions. When he saw the glass-like surface of Norfork Lake on Friday morning, he figured the technique he’s employing (and keeping a closely guarded secret) could result in a few quality bites despite the cold.

He boated a keeper bass within 10 minutes after takeoff, though he had to wait another three hours before he got his other two bass in the livewell in quick succession. His biggest bass weighed about 3 pounds.

“I think we should just call it off and go home right now,” Dodson said with a laugh. “It was tough out there.” Having been in many competitive tournaments, he said he doesn’t feel pressure with a berth in the 2018 GEICO Bassmaster Classic presented by DICK’S Sporting Goods on the line.

The man with the heaviest two-day total in the Fish-Off will be a part of the Classic field when the event is held March 16-18 on Lake Hartwell in South Carolina.

“It’s the only big tournament I’ve never fished,” Dodson said. “But I thought someone would have five (today). I had my chances. I lost two 3-pounders that really could have made a difference.”

Dodson, who once competed in the FLW Tour’s Forrest Wood Cup, said he’ll fish Saturday the same way he did Friday.

Friday’s competition was delayed two hours because of fog. When the anglers launched onto Norfork Lake, they found the going extremely tough. Butler said he absolutely would welcome wind Saturday morning for several reasons.

“When the wind quits blowing, it gets in your head and you start to scramble,” Butler said. “For me, it’s a confidence booster. I think most of these guys are fishing shallow. The water has good color, but nothing was working without the wind.”

If he doesn’t get the conditions he desires?

“We’ll still lay it all on the line,” Butler said. “It’s the Bassmaster Classic on the line here. You go big or you go home.”

Beau Govreau weighed the biggest bass of the day, though it was the only keeper he had. He said he was worried until the final minutes, but the quality bass reassured him he still could win the Fish-Off.

“Catch another one of those tomorrow and it’s all tied up,” he said.

The Mountain Home Area Chamber of Commerce is hosting the event.