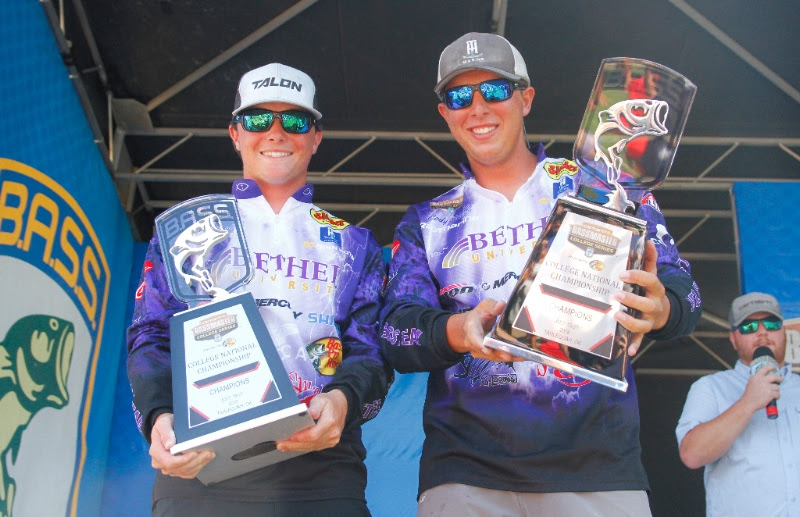 After two solid, trouble-free days and even with a 6-pound, 2-ounce lead going into the final day, Bethel University’s Garrett Enders and Cody Huff felt they left the door open when Campbellsville University pulled a miracle from the stingy, sinfully hot waters of Tenkiller — the biggest bag of the contest.

The Tahlequah crowd on the Northeastern State University campus erupted in screams as Campbellsville’s Bradley Dunagan and Nick Ratliff dragged a big green 6-pound anchor across the stage and posted 18 pounds, 2 ounces to climb from fifth place to snatch the hot seat away from West Virginia University’s Nolan Minor and Casey Lanier, who posted 15-4 of their own on the final day.

With just three fish in their bag and a deficit of 7-4 to cover for the win, Enders confessed he had no words to describe the feeling and Huff just said, “I’m nervous, I’m ready to get it going.”

Their three hardest-won fish of the tournament sealed the win with 9-2 for the day and a total of 41-6 for the three days on Tenkiller.

In addition to taking the championship title, Enders and Huff join the Campbellsville and West Virginia teams, along with Cole Burdeshaw and Peyton McCord of Auburn University as the Top 4 head to the 2018 Carhartt College Bracket presented by Bass Pro Shops, set for Aug. 14-16 on Milford Lake out of Junction City, Kan.

A berth in the 2019 Bassmaster Classic presented by DICK’S Sporting Goods, set for March 15-17 on the Tennessee River hosted at Knoxville, will be on the line for the eight anglers there, who will face off in the bracket-style, catch-and-release contest.

The college championship was tough and inconsistent as promised with sultry heat the first two days. Today’s finale brought a little break in the heat, but an invasion of recreational boaters that kept things topsy-turvy.

Enders and Huff were the only anglers to limit both of the first two days, and they did it quickly each morning, and without error.

“We hadn’t lost a fish all week; we lost four keepers today,” Huff said. “I guess you have to pay your dues.” Saturday they also sacrificed 14 flutter spoons to the docks of Tenkiller.

The first fish lost offered an indication of the lackluster luck factor ahead as it snagged a dockside obstacle. “He jumped up and actually got my jigging spoon’s hook caught on a rope holding a minnow bucket,” Huff said. “He was just hanging there and all we could do was watch him get off.”

All of their fish came on either a 5 1/2-inch Strike King Sexy Spoon or a 7/8-ounce Jewel Jigging Spoon as they targeted sunken cedars around docks with most hits happening between 15 and 20 feet.

“Most everything hit it on the way down,” Huff said. “You drop it and when it gets to 20 then you just work it back up.” One of the good fish missed Saturday followed the spoon nearly up to the boat, however. “He nailed it and dove but he came off,” he said.

Campbellsville’s Dunagan and Ratliff also worked spoons around marinas, but worked so hard at it they had to make a run to the nearest Bass Pro Shops, in Broken Arrow, to restock after Day 2.

“We just started looking for spider webs, pitching where nobody else had been,” Ratliff said. “We lost like 15 spoons today.”

Their two best lures were a 4-inch Strike King Sexy Spoon and a 3.75-inch Talon Custom Lures Lake Fork Flutter Spoon. “It’s a little heavier on a shorter frame so you can slide it back in there,” Ratliff said. A key bait their first two days was a Zoom Hand-Poured Trick Worm on a drop shot.

The Auburn anglers took a different route to the top. They targeted offshore brushpiles at 15 to 20 feet with a standup jighead and finesse worms, a strategy that proved hard with increased recreational traffic Saturday.

“We should have been flipping spoons under docks,” Burdeshaw said.

West Virginia’s Nolan Minor said they pieced together a variety of bites, junk fishing from the dam to a “magic tree” as far up the Illinois River as they could run.

“Today was the first day we caught more than one fish on the same bait,” Minor said. Saturday they caught two on a 6-inch Mega bass Magdraft, two on a 3-inch Keitech swimbait on a spot loaded with schooling bass, and a Berkley Dredger 25.5 deep-diving crankbait.

For Garrett, the win holds extra meaning as nearly four years earlier to the day, July 19, 2014, he and then-partner Nick Osman won the first Bassmaster High School Championship presented by Carhartt on Kentucky Lake. Garrett is now the only angler to win both and high school and college championship event in B.A.S.S. history.

“You can’t help but remember something like that,” he said. Deciding which was the more thrilling day took little thought, however.

A 6-3 largemouth caught on Day 2 by Hayden Bartee of Alabama’s Jefferson State University held up as Carhartt Big Bass for a $500 Carhartt gift certificate.