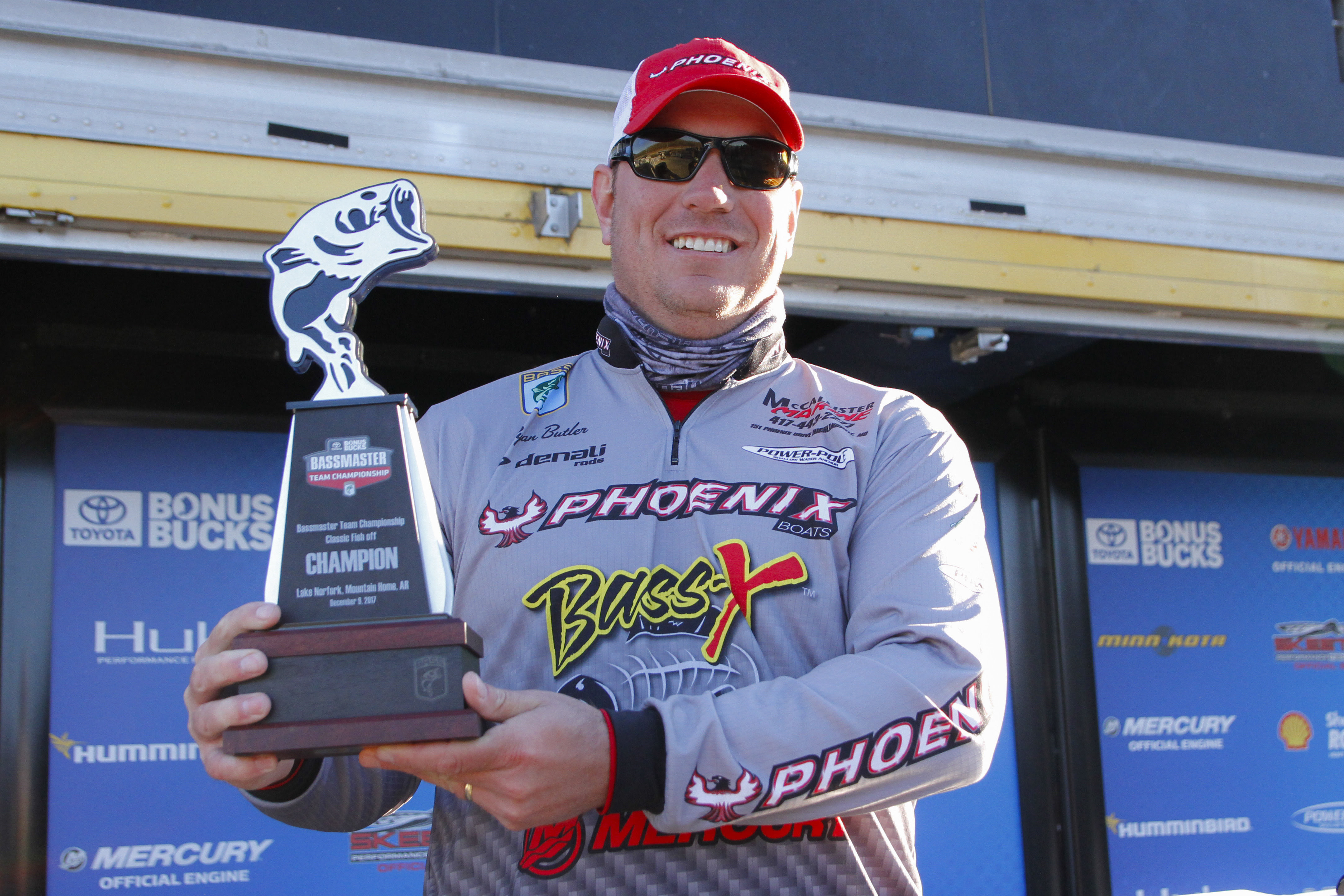 MOUNTAIN HOME, Ark. — Ryan Butler said on Friday that he was sore from casting so many times during that round of the Toyota Bonus Bucks Bassmaster Team Championship Classic Fish-Off.

And after all that work, he only had two bass to show for it.

On Saturday during the final day of the fish-off portion of the competition, Butler said he couldn’t guess how many hundreds of casts he made while feverishly working the shorelines of Norfork Lake here in the heart of the Ozark Mountains.

He still only had five keeper bites today, but he made every one of them count.

Butler, a 36-year-old resident of Blue Eye, Mo., caught a limit of five bass on Saturday that weighed 15 pounds, 1 ounce. Coupled with the two bass he caught on Friday (which weighed a total of 3-10), Butler finished with a two-day total of 18-11. That was enough to lead the six-angler field and earn the last remaining spot in the 2018 GEICO Bassmaster Classic presented by DICK’S Sporting Goods which will be held March 16-18 on Lake Hartwell at Greenville and Anderson, S.C.

Despite having only two bass on Friday, Butler eventually realized he still had a great chance to win the fish-off. Robert Dodson Sr., a 71-year-old angler from nearby Harrison, Ark., led Friday’s round, but he only had three bass for a 6-6 total today. Beau Govreau of St. Louis, Mo., was the only other angler who caught a bass on Friday; the three other competitors zeroed.

“I was disappointed coming in on Friday with only two bass,” Butler said. “I thought I had blown it. You only get so many chances at something like this. Then my partner in the team competition (Dustin Lippe) didn’t catch a fish. Another guy didn’t catch anything and another guy didn’t have anything. And with Dodson only having three bass, I said ‘Wait a minute. There’s still hope.’

“So when I got here today, I was fishing to win it,” Butler said.

Butler, who fishes with the Joe Bass team trail, was hot on Saturday morning despite temperatures that were in the mid-20s at launch. He boated a smallmouth that weighed nearly 3 pounds in the opening minutes of competition, and he had four bass in the livewell by 9 a.m. (including a 4-plus pound bass that anchored his bag). Butler went more than four hours without a fifth bite, however, but he finally got his limit about an hour before weigh-in.

Butler caught all his bass on a loon-colored Whopper Plopper topwater bait that he outfitted with Mustad triple grip hooks. He threw the bait on a 7-foot, 4-inch Denali worm and jig rod. He caught his bass in anywhere from 1 to 4 feet of water and said wind and shade were keys to his bites.

“(Dustin and I) knew that we could get better bites on that Whopper Plopper,” Butler said. “It’s a heavy bait, and you can throw it a long way. And that rod is just a good, long rod with a good tip on it. We use it with a lot of techniques. I did the same thing yesterday, but we didn’t have the wind to make it effective. Today, we did.”

Butler said it’s every bass angler’s dream to compete in the Bassmaster Classic, and he’s excited for the chance. But first, he needs rest.

“I’m physically exhausted,” he said. “It was hard out here this week. It was freezing cold, and we had to work for every bite. But more than anything, I’m emotionally exhausted. The mental part of this probably is harder than anything.

“This is a dream come true. You never know if you’re going to get your chance to do something like this.”

Butler was part of 162 two-person teams that competed in the team championship portion of the event on Wednesday and Thursday. He and Lippe, who lives in Lampe, Mo., finished second in the Team Championship and both got the chance to fish two more days for a spot in the Classic.

His win marked the second consecutive year an angler from the Joe Bass team trail won the Classic fish-off. It also marked back-to-back victories in the event by Missouri anglers. Scott Clift of Dadeville, Mo., won the 2016 fish-off and qualified for the 2017 Bassmaster Classic on Texas’ Lake Conroe in March.

Govreau finished second in the 2017 fish-off with a two-day total of 14-6. He caught a limit weighing 11-2 on Saturday, but couldn’t quite recapture the magic that helped him and his older brother Brett Govreau win the Team Championship on Thursday.

Dodson Sr. placed third with a two-day total of 13-4. His son and fishing partner, Robbie Dodson Jr., finished fourth with 12-1 overall. Brett Govreau was fifth with 9-2 and Lippe was sixth with 7-10.

The Mountain Home Area Chamber of Commerce hosted the tournament.