LEESBURG, Fla. (March 12, 2017) – Rookie pro Bradley Dortch of Atmore, Alabama, brought a five-bass limit weighing 22 pounds, 2 ounces to the scale Sunday to win the FLW Tour at the Harris Chain of Lakes presented by Ranger Boats. Dortch’s four-day total of 20 bass weighing 73-9 gave him the win by a narrow 1-pound, 12-ounce margin over second-place pro J.T. Kenney of Palm Bay, Florida, and earned him $100,000 in a dramatic finale to the four-day tournament that featured 163 of the best bass anglers in the world. 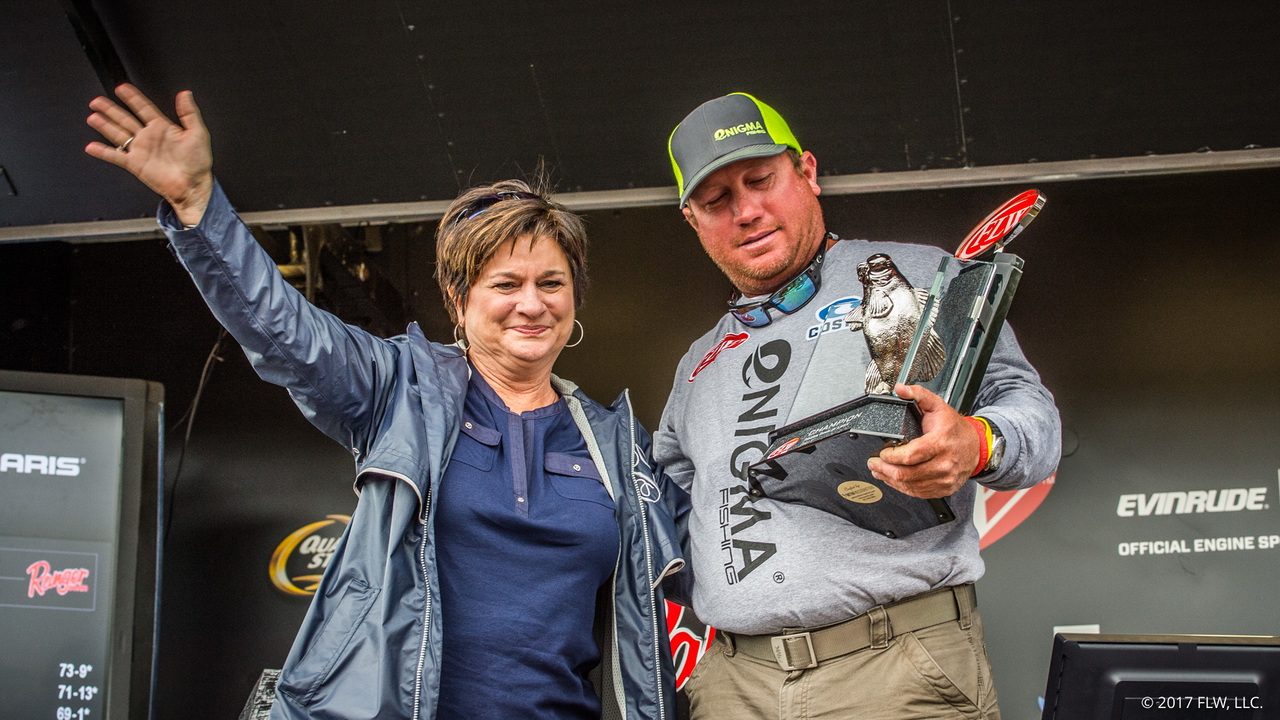 “This is something that I’ve been dreaming about and working towards for years,” said Dortch, who had one prior career win in FLW competition – a Costa FLW Series event on Wheeler Lake. “It really hasn’t even set in yet, I cannot believe it. When you’re sitting in the middle of J.T. Kenney, John Cox, Bryan Thrift, and my name is being mentioned with those anglers – wow.

“It’s kind of crazy to think about, but the key for me this week was my Day One boat draw,” Dortch continued. “I had a late boat draw on Day One and that caused me not to go to Lake Griffin, which is where I had spent the majority of my practice. I was boat 121, so I decided to stay in Lake Harris for an hour or so and let the lock clear. While I was waiting, I caught two 4-pounders and that kind of told me that I should hang around.”

The decision paid off for Dortch, as he spent all four days of the tournament fishing in Lake Harris and Little Lake Harris. He said he caught most of his fish throughout the week on a chrome and blue-colored Rat-L-Trap and a junebug-colored NetBait Salt Lick worm. He also caught a few fish on Sunday with a junebug-colored NetBait Big Bopper worm.

“I used to live down here, so I’m pretty familiar with Florida and how the fish like to set up,” Dortch said. “I knew what I needed to look for – green, crispy hydrilla growing out in front of spawning pockets. I figured the spawn would be pretty much over by now and that those postspawn fish would probably be the deal.”

With his tournament win, Dortch has now earned 500 total Angler of the Year points on the season and is in second place in the coveted Rookie of the Year (ROY) race. Justin Atkins of Florence, Alabama, the current ROY leader, is one spot ahead of Dortch with 502.

The top 10 pros finished the tournament on the Harris Chain of Lakes:

Overall there were 50 bass weighing 149 pounds, 10 ounces caught by pros Sunday. All of the final 10 pros weighed in five-bass limits.

Robert Crosnoe of Inverness, Florida, won the co-angler division and $25,000 Friday with a two-day total of 10 bass weighing 33 pounds, 1 ounce, followed by Tyler Woolcott of Port Orange, Florida, who finished in second place with 10 bass weighing 30 pounds, 9 ounces, worth $7,550.

In FLW Tour competition, pros and co-anglers are randomly paired each day, with pros supplying the boat, controlling boat movement and competing against other pros. Co-anglers fish from the back deck against other co-anglers. The full field of 326 anglers competes Thursday and Friday. Co-angler competition concludes following Friday’s weigh-in, while the top 20 pros based on their two-day accumulated weight advance to Saturday. Only the top 10 pros continue competition Sunday, with the winner determined by the heaviest accumulated weight from the four days of competition.

Television coverage of the FLW Tour at the Harris Chain of Lakes presented by Ranger Boats will premiere in high-definition (HD) on NBC Sports Network (NBCSN) May 3 from 12:30 p.m.-1:30 p.m. EDT. The Emmy-nominated “FLW” television show airs on NBCSN, the Pursuit Channel and the World Fishing Network and is broadcast to more than 564 million households worldwide, making it the most widely distributed weekly outdoors-sports television show in the world.

FLW is the world’s largest tournament-fishing organization, providing anglers of all skill levels the opportunity to compete for millions in prize money in 2017 across five tournament circuits. Headquartered in Benton, Kentucky, with offices in Minneapolis, FLW conducts more than 274 bass-fishing tournaments annually across the United States and sanctions tournaments in Canada, China, Mexico, South Africa and South Korea. FLW tournament fishing can be seen on the Emmy-nominated “FLW” television show, broadcast to more than 564 million households worldwide, while FLW Bass Fishing magazine delivers cutting-edge tips from top pros. For more information visit FLWFishing.com and follow FLW at Facebook, Twitter, Instagram, YouTube and Snapchat.