2 Lures Swindle will use in the Bassmaster Classic

Team Toyota’s Gerald Swindle is very aware that the Fish Head Spin lure has a legendary reputation on Lake Hartwell, but don’t count on him throwing it. Instead he’ll dance with the girls that got him to his impressive 17th Bassmaster Classic, and he feels good about it.

“I suck at throwing the Fish Head Spin, because any lure you gotta fish slower than I was at second grade math in 30 feet of water, is not a lure I need to be competing with during the biggest tournament in the world,” says Swindle. 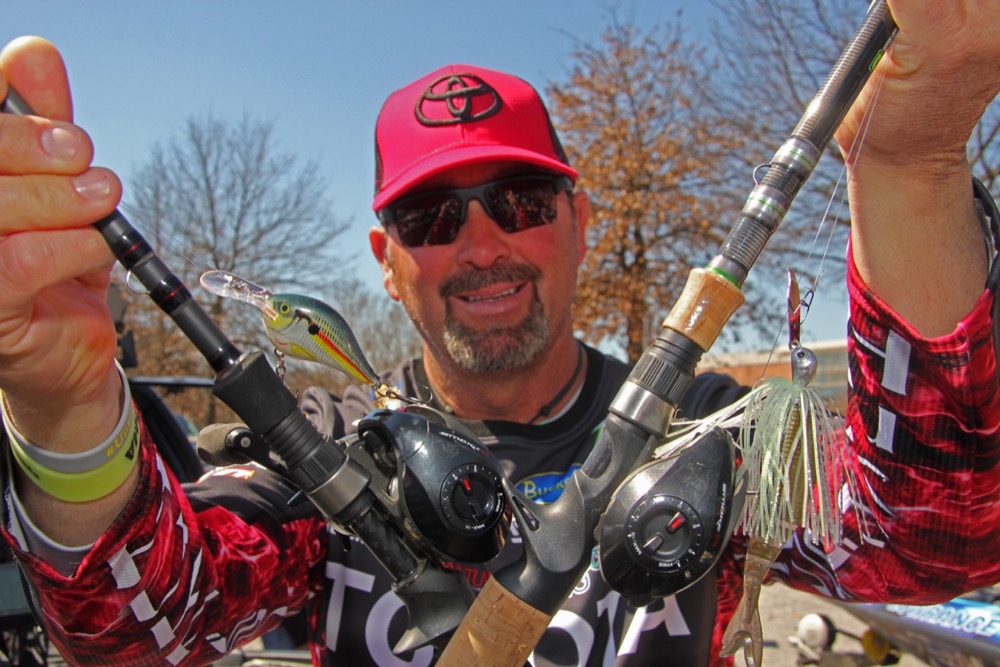 “An NFL team doesn’t make it to the Super Bowl, and then change their whole offense the night before the game, and I’m not going to either,” illustrates the 2-time Toyota Bassmaster Angler of the Year.

Swindle’s also decided he’s not going into the lawn care business anytime soon either – mostly because he hates raking leaves – especially with his crankbait.

“The water levels rose very slowly here at Hartwell, so instead of flushing last fall’s leaves out, the bottom is just littered with them, and that’ll make a man cuss when every cast comes back with leaves on his hooks. So I’m throwing a Rapala DT 6 that runs 6-feet deep into 10 and 12 feet of water,” reasons Swindle.

That approach seems to be in direct conflict with crankbaiting basics that preach the importance of making bottom contact with your lure. But Swindle says Hartwell is different.

“I’ve been fishing Hartwell since long before I was a full time pro, and the strong presence of blueback herring here in recent years has changed the ballgame. Instead of bass looking on the bottom for crawfish, they’re always looking upward for schools of blueback herring near the surface. So winding that DT 6 through the middle of the water column makes perfect sense here,” he says.

The vibrating blade bait or Chatterbait will also be a strong part of his Classic lineup. Mostly because he can fish it fast and cover water.

“I’m not on a school of fish where I can catch five keepers in a 30 yard stretch. So I need to cover three miles of shoreline that’s covered in dogfennel vegetation, and there’s not many lures that I can cover water faster with than a Chatterbait,” says Swindle.

Swindle’s hardware for Chatterbaits includes 16-pound line, the affordable 7’ 2” G Force rod he designed for Quantum, and a Smoke S3 6.1:1 reel that’s slow enough to help him keep the lure down in the water column just a bit.

There’s a huge number of fans who would love to see Swindle win his first Classic – and if he does, you can bet he’ll be running the same “offense” that’s led to a highly decorated career thus far.